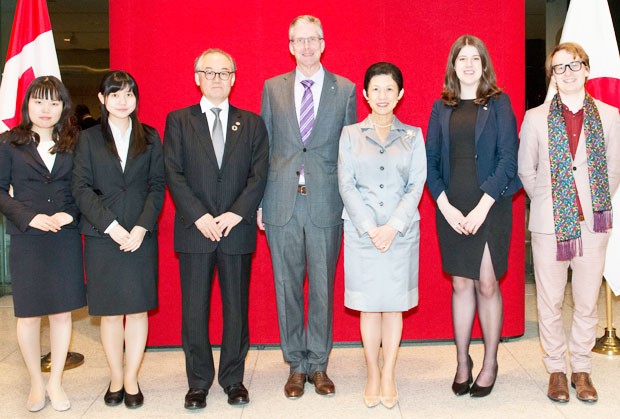 Noah Furlani, an undergraduate student in Concordia's Department of English, recently returned from Japan, where he was a member of the winning team at the 2018 Japan-Canada Academic Consortium (JACAC).

The student forum took place at J. F. Oberlin University’s Fuchinobe Campus, an hour outside of central Tokyo. While there, Furlani took in the nearby sights and sounds.

We caught up with him to learn more about his week abroad.

'You see, do, learn and eat new things continually'

Tell us how you came to travel to Japan for a week with Concordia International.

Noah Furlani: My trip to Japan was facilitated by the Prince Takamado Japan Centre for Teaching and Research, which operates out of the University of Alberta. The Centre’s mission is to enable cross-cultural encounters between Japanese and Canadian students and teachers.

The occasion for this trip was the Japan-Canada Academic Consortium, a week-long forum that brings together 14 Canadian and 14 Japanese undergraduate students. The consortium happens annually, and switches between host universities in Canada and Japan.

What did you do during this whirlwind week?

NF: Over a few days, we were expected to produce a presentation on the role of the humanities in a technological age. Part of our preparation included a number of lectures prepared by the host university.

At the Canadian Embassy in Tokyo, we finally presented our work to the organizers of the forum, to members of the host university and finally to the Ambassador of Canada to Japan, the Honorable Ian Burney, and Her Imperial Highness Princess Takamado, in whose husband’s honour the centre was founded.

And you won for best presentation! It sounds like an incredible experience. Academics aside, what else did you take away from the trip?

NF: A trip like this, with so much to do and see, and such a great distance to cover, all in a week, was bound to be physically and mentally taxing, but it was highly worth it.

I have nursed an interest in Japanese culture since my childhood and started learning the language at the Japanese-Canadian Cultural Centre of Montreal when I was 12. This was my first time going to Japan, so I was beyond excited.

What with the speed and intensity of the trip, it all felt a little surreal! I would advise students thinking of going on exchange to brace themselves for culture shock, or rather, not to underestimate it. Take care of your mental health, so that it won’t get in the way of your experience of a new culture.

You will see, do, learn and eat new things continually, which is thrilling but also very tiring. Be sure to keep that in mind. All in all, my week-long trip to Japan was simply fantastic, and I am deeply grateful to the Prince Takamado Japan Centre and Concordia International for facilitating and indeed enabling my trip there.

Connect with the team at Concordia International for more information on the myriad academic exchange opportunities offered to students.