The Stingers beat ETS 35-7 for the RSEQ title. NEXT STOP: the nationals in Guelph!
|
By Meagan Boisse 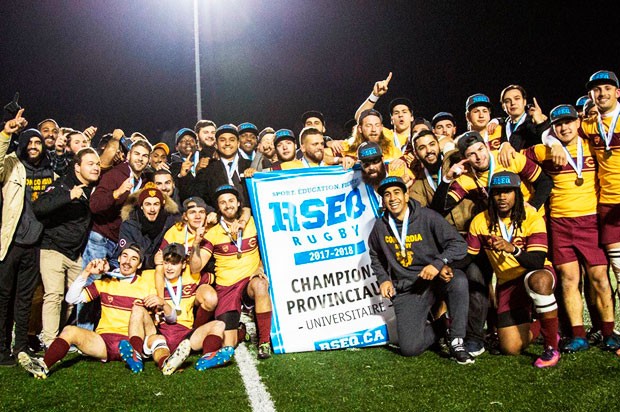 Stingers coach Craig Beemer: "The guys couldn’t have given any more." | All photos by Brianna Thicke

EDITOR'S NOTE: This story was updated on Tuesday, November 14

After the Concordia Stingers men’s rugby team posted a 1-6 record last year, no one would have predicted they would follow it up with a perfect season and a provincial title.

But when the final whistle blew at the Concordia Stadium Sunday afternoon, they had pulled off exactly that.

“Hopefully it’s the start of something special here at Concordia,” says Stingers head Coach Craig Beemer, adding that the team was excited and happy after the milestone victory.

“The guys couldn’t have given any more over the past year. With every win they only worked harder, and as the season went on and we kept improving we began to realize what an amazing season this was going to be.” 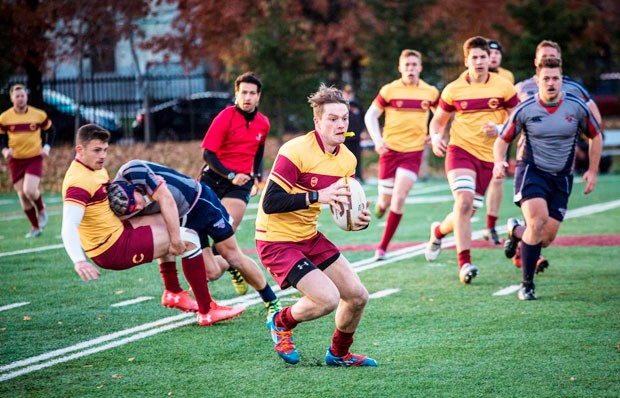 After defeating McGill in the semi-finals 36-18, the Stingers were confident going into the championship match against ETS.

“We headed in hungry and ready to make a statement, to prove ourselves not only to our opponents but to the league,” says team Captain Andreas Krawczyk.

The first 20 minutes shaped up to be a defensive battle, in which the ETS defence was able to keep Concordia from playing their fast-paced brand of game. While running down the sideline in an attempt to make a big break Krawczyk suffered an injury that forced him to leave the game.

“I got tackled and my knee stayed locked,” Krawczyk explains.

As the first half wore on things began to turn around for the Stingers and they were able to move the ball more.

They quickly overwhelmed the opposition and were up 21-0 at the half, thanks to three penalty goals from fly half Jonathan Banks, and tries by rookie centre Samuel Montminy and hooker Nicholas Smith.

Krawczyk says watching from the sidelines and seeing his teammates step up couldn’t have made him any prouder as captain.

“It was a hard blow to be taken out of the game, but to see the guys still rally and overcome the odds, it was one of the best feelings in the world.”

The second half began with an early try for Concordia by fly half Moritz Wittmann. The Piranhas responded with a try of their own. Then the Stingers took a couple of yellow cards, forcing them to play a man down for 20 minutes.

“We had a couple of big goal-line stands where they didn’t score,” says Beemer.  “It’s a real testament to the guys, because in rugby there isn’t much coaching during the game, given there are hardly any stoppages.

“The coaching staff had put together a game plan very different from the one used in the semi-final. That they were able to very successfully play two different styles of rugby from one game to another is a real strength,” the coach added.

At the 72-minute mark, Montminy picked up his second try of the game, cementing the Stingers place as this year’s RSEQ champions. 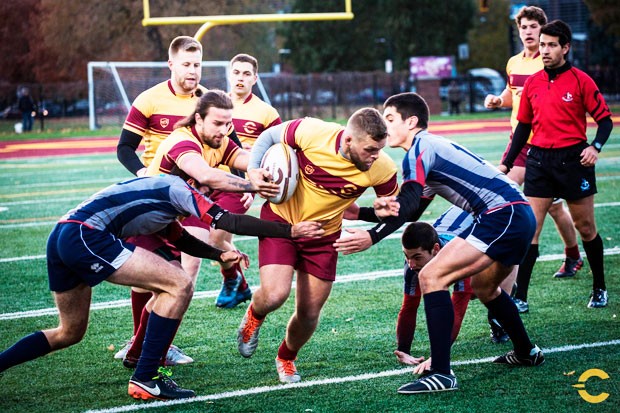 “We came into the season with a lot of humility, but also knowing we had a lot of potential,” Beemer adds, noting that the team had a number of players coming back from injury, combined with a talented crop of recruits. The Stingers also had a few months of winter training under their belts.

“We had something to prove. It was a long season because we put so much time and effort in. For us, it was really about getting better every week and it was amazing to watch us pull that off. Even when we were winning there was no complacency, no one took anything for granted."

For Krawczyk, the team’s cohesion was a huge factor.

“We believed in each other, we believed in the system,” he says. “We were more than just a team this season; we were a brotherhood. We all wanted to overcome what had happened in the past and make a statement to this league that we're not finished, that we're ready to be the best team, and not only this year, but for years to come.”

Off to the national championship

The Stingers will look to claim a national title when they compete in the first ever Canadian Men’s University Rugby Championship, taking place from November 16 to 19 at the University of Guelph.

Six of the best teams from across Canada will face off, and Beemer is eager for his team to take part in the inaugural tournament.

“We understand that the challenge in front of us is immense,” he says.

"We will be facing some of the best teams in the country. If we play our best, the tournament is formatted in a way that we will definitely have a chance to medal. Hopefully it turns out to be the medal colour all six teams are wanting and fighting for.”