Concordia’s Rosemary Reilly and a team of medical researchers champion art therapy’s potential for dealing with adversity
|
By J. Coady 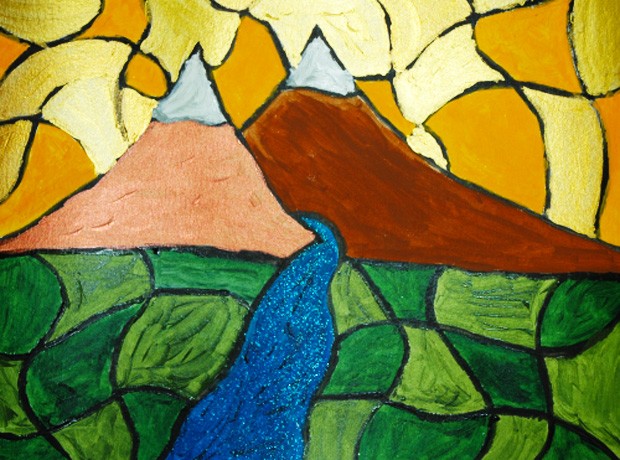 My present (2nd panel of a triptych) by Louise. Her accompanying poem is called Abstract/Concrete.

They were women battling breast cancer.

Many were making art for the first time since childhood. But the activity gave them insights so valuable, they figure at the heart of a public outreach program and a new publication initiated by a social science researcher at Concordia.

When Rosemary Reilly, associate professor of applied human sciences in the Faculty of Arts and Science, read the data from a pilot study on art therapy, she was deeply affected.

“Witnessing women talk about how art and art therapy helped them make sense of and grow from their experiences with breast cancer was both touching and exciting,” Reilly says.

“I immediately thought, ‘Everyone should know about this.’”

The study’s investigators had initially asked Reilly to help analyze their findings in her capacity as a qualitative social science researcher. She and the team discerned several related themes: art-making in the context of art therapy created self-reflective spaces for these women to cope with their diagnosis and treatment, build resiliency to adversity and find inner peace and a renewed sense of meaning and purpose.

“The emotional and spiritual aspects of the person are often neglected by health professionals, who, understandably, tend to privilege treating the disease and the body,” Reilly notes. 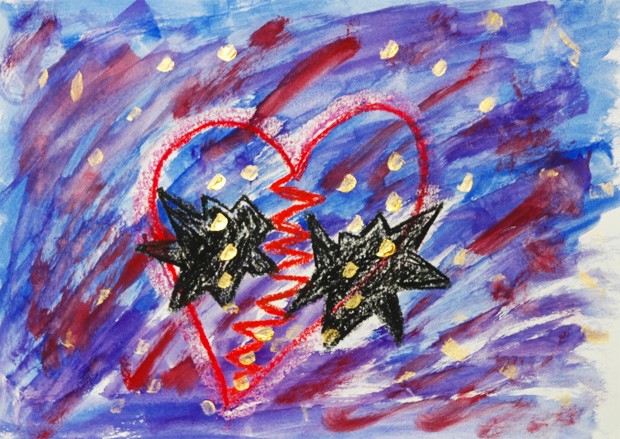 Golden tears, and accompanying poem "My golden tears" by Maria.

The key strength of the art therapy approach, according to Reilly, lies in promoting existential and posttraumatic growth.

“That we, as individuals, can use these adverse things that happen to us in a way that can help us grow is a revelatory thing,” she says.

“Some of the women involved in the study are still in treatment, others are in remission or palliative care. But all of them say art therapy has been key in navigating their journeys.”

The findings regarding the benefits of art to traverse adversity are aligned with those of other studies. But the group of researchers decided that they were powerful in their own right and had the potential to change the way medical professionals and the general public viewed art therapy during cancer treatment. So, they applied for a Connection Grant from the Social Sciences and Humanities Research Council in the hopes of accomplishing that.

Once funding was secured, the group crafted a series of events on the power of art to overcome adversity. They mounted art exhibitions around the themes of Adversity, Love and Hope. Laux was able to solicit artwork made by those who had been affected by cancer.

Additionally, there was a guest speaker series, a pamphlet and open art-making sessions at various locations, including the MUHC. Funding was even used to create a permanent exhibition space for patients’ artwork at the Cedars Cancer Centre at the Glen Site.

The events represented not just those navigating the cancer trajectory but their families and health care professionals — in short, anyone touched by the disease.

The series’ final component was a chapbook entitled “Emergence from the rubble: The found poems and artwork of women living through breast cancer engaging in art therapy.”

Reilly selected several interviews with the 10 participants in the study and formatted excerpts into found poems accompanied by the participants’ artwork. The chapbook was completed and uploaded to Concordia’s Spectrum Research Repository in June.

Reilly recalls one participant, Sofia, who filtered her experience of battling cancer through the prism of her mother’s fight with terminal cancer. Reliving her mother’s ordeal served to intensify her own. But in the end, art proved key to her healing.

Initially convinced that the material was too intimate to share with the public, Sofia reconsidered after her daughter persuaded her that it was too beautiful and important not to put it out there.

The poems were designed, Reilly stresses, to illustrate how art can promote existential and posttraumatic growth, to engage the emotions of the readers and to have a social impact.

"We want to effect change and promote social justice and for the general public to be able to understand what our research is saying. I think arts-based methods give us a very interesting, evocative and moving way to do that.”

Read the cited chapbook, "Emergence from the rubble: The found poems and artwork of women living through breast cancer engaging in art therapy.”