ON NOW: It’s a summer of truth at Leonard and Bina Ellen Art Gallery 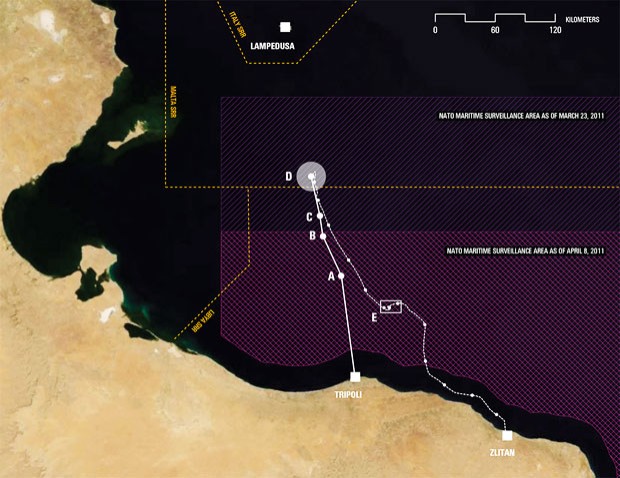 This summer, the Leonard and Bina Ellen Art Gallery is presenting two exhibitions that explore notions of truth, counter-truth and post-truth: In the Vestibule with Forensic Architecture, curated by gallery director Michèle Thériault, and SIGHTINGS 21: (Post-)Truth on Display, curated by Katrie Chagnon.

Chagnon is the Max Stern Curator of Research at the gallery.

What will visitors see at In The Vestibule with Forensic Architecture?

Katrie Chagnon: For the second edition of In the Vestibule, curator Michèle Thériault presents two investigations conducted by Forensic Architecture, a research agency started in 2011, and based at Goldsmiths, University of London.

The agency undertakes advanced architectural and media research on behalf of international prosecutors and human rights organizations, as well as political and environmental justice groups.

As Thériault explains in an accompanying essay, for each investigation — The Left-to-Die Boat (2012) and Nakba Day Killings (2014) — “the summarizing video is singled out on a flat screen whereas the full analysis is made available on computer stations. In this way, the viewer gains a distance, allowing him or her to subject this practice to the same examinatory gaze that is theirs within the parameters of a distinct spatiality.”

What can people expect from (Post-)Truth on Display?

KC: (Post-)Truth on Display is the concluding project of a yearly thematic SIGHTINGS series focused on pedagogy. As the curator of this exhibition cube, located on the ground floor of the Henry F. Hall Building, I developed the idea of an open summer library that would address current conditions of truth and the consequences of this within the university context.

The outside faces of the SIGHTINGS cube have been transformed into bookshelves displaying contemporary and historical works, from Nietzsche and Georges Orwell to Bruno Latour and Michael Lynch. Inside the cube, we also created a small reading room with chairs and a coffee table so people can sit, read and annotate some of the books and texts displayed on the shelves.

What is the idea behind the open library concept?

KC: By moving a host of textual resources into a public space within the university — which, because it is occupied by an exhibition structure, also calls for an aesthetic appreciation — this installation invites a critical questioning of the relationship between knowledge and power.

The books and articles can be read on site or borrowed for a few hours, then brought back, based on trust. Moreover, each person is free to annotate and highlight passages, which will then be transcribed and archived on the gallery’s website. 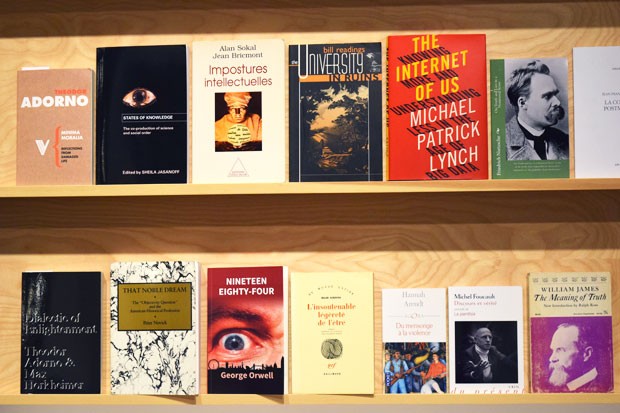 How are the two exhibitions linked?

KC: They are mainly linked by the theme of truth (along with counter-truth, post-truth and so on), which has become an urgent issue in the last few years, and increasingly since the election of Donald Trump in the United States.

Both In the Vestibule with Forensic Architecture and (Post-)Truth on Display are based on the importance of rethinking the relationships between power, knowledge and truth, and their epistemological, as well as political and social, consequences.

The two projects raise questions about our responsibility — as intellectuals, as citizens and even as human subjects — toward facts, and how to restore the conditions of truth in contexts such as research and learning institutions, considered as “forums” for debating claims and assumptions as well as intellectual, ethical and political positions.

What was involved in creating the exhibitions?

KC: Both projects are very much university-based. The SIGHTINGS library is constituted mainly of texts suggested by academic personnel (professors, deans, researchers and so on) of different departments, representing every faculty at Concordia.

We asked what they considered to be particularly relevant readings (or re-readings) for this specific historical moment, which is defined by such a marked crisis of truth.

The responses were interesting and diverse. Even the president participated, suggesting a wonderful scholarly book by Italian historian Carlo Ginzburg, The Cheese and the Worms: The Cosmos of a Sixteenth-Century Miller (1976), which is certainly worth a read this summer.

As the curator of In the Vestibule with Forensic Architecture (FA) explains, “Unlike the typical expertise of scientists and pathologists in conventional police forensics, the team at FA is a mix of architects, theorists, artists, designers, activists and scientists who are mostly graduates or students of the Centre or international external specialists. Eschewing the debatable neutrality of the figure of the scientist, researchers at FA take position: the agenda for research is set according to their political interests, and cases are built up through collective work.”

Why is it important to examine the notion of truth?

KC: In a context characterized by a proliferation of “alternative” facts, circulated through new information networks that have been fragmented and personalized by algorithmic filter bubbles — as well as by the hegemony of violent political truths — we should be extremely worried about the growing indifference toward the distinction between true and false.

As we realize the detrimental epistemological and socio-political consequences of a massive disaffection toward truth in the last decades, it seems crucial to bring together as many perspectives, positions and strategies as possible to counter this and to re-engage with truth, not only as a principle of knowledge but also as a way to understand the material and social conditions of the world in which we live in its full complexity.

In the Vestibule with Forensic Architecture is on display till August 11 at Concordia’s Leonard and Bina Ellen Art Gallery. SIGHTINGS 21: (Post-)Truth on Display runs until September 4 in the lobby of the Henry F. Hall Building (1455 De Maisonneuve Blvd.).