From failing grades to a fearless move, the distinguished recipients recall their formative learning experiences
|
By Fiona Downey 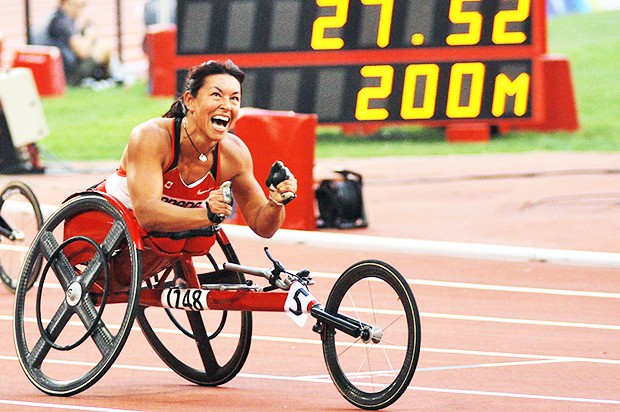 At this year’s spring convocation ceremonies, Concordia is welcoming nine new honorands who have made their mark in the fields of literature, athletics, international aid, music, business and philanthropy.

These distinguished honorands will address the university’s more than 5,400 graduates during ceremonies at Place des Arts from June 5 to 7.

In anticipation of the worldly advice to come, here are stories from Concordia's nine spring 2017 honorands about the learning experiences that shaped them — as people and as professionals.

Chantal Petitclerc learns to be fearless

"One of the formative experiences of my life was moving from Québec City to Edmonton at the age of 20. I was a new member of the national wheelchair racing team, and my decision to move was motivated by a desire to work with the best coach we had in Canada: Peter Eriksson.

"More than medals, that crucial decision brought me the experience of a lifetime. Moving to a new province, where my second language is prominent, and away from family and friends to train and also to study history at the University of Alberta was an amazing learning experience. It forced me to be out of my comfort zone, discover a different culture, connect with my fellow students and make friendships that still last today.

"I have fond memories of my three years in Alberta, and I know that what I learned made me who I am. This is why I believe in the power of adventures, exploring new horizons and not being scared to push our own limits. Good things happen to those who are fearless!"

Chantal Petitclerc will address Concordia's Faculty of Arts and Science on Monday, June 5, at 10 a.m.

"I have been to world-class universities, but my best teacher was Geoffrey Adams, who taught me history at Loyola College in the 1960s.

"He had intellectual honesty, high standards and a contagious idealism. Above all, he never talked down to us; he treated us like equals. He would go from teaching Voltaire on campus to campaigning (twice) as the NDP candidate in Westmount. We didn’t think he was tilting at windmills. We saw him as giving us an example of how to live.

"Before he died, he confided to me: 'One thing brings solace while the world totters: we found the perfect partner, the soul mate who made the up-and-down swings of the New York Stock Exchange seem insignificant. Friendship and love, especially when they are bound together, make everything else fade away.'"

"The experience I acquired at the Bell Canada Pension Fund in the early 1970s was particularly instrumental to my professional career.

"I was hired by Bell in 1971 as a research analyst for the Canadian equity portfolio at a time when the company had recently decided to manage its pension fund in house. After a couple of years as a research analyst, my boss, who was the lead portfolio manager of Canadian equities, quit. The pension fund manager at the time gave me the opportunity to work toward succeeding him.

"At the age of 27, I did in fact earn the position. After my promotion, I discovered how undervalued small-cap stocks were versus large-cap stocks. I did a 25-year study proving that they significantly outperformed the general market.

"After my study was presented to the investment committee, they agreed to allow me to invest 10 per cent of the Canadian equity portfolio in small-cap stocks. This is how my love affair with these stocks began and that is why Van Berkom and Associates in Canada and Van Berkom Golden Dragon in Hong Kong are 100 per cent focused on managing small-cap portfolios for large institutional clients in Canada, the United States and Asia."

Kenneth W. Woods meets a mentor who leads by example

"In 1974, I was attending my first MBA classes at Sir George Williams University. I had spent four years as a computer programmer and analyst at Northern Telecom, after earning a math degree from the University of British Columbia.

"Professor Calvin Potter introduced me to the world of finance. He was a likeable man who wrote the first book on Canadian finance — our textbook. His wife Winnie would later say that Calvin didn’t speak English, he spoke Finance. Such phrases as 'an annuity to perpetuity' and 'industrial espionage' were initially foreign to us, but we soon caught on.

"During my second year I ran the computer simulation program for the MBA finance class and taught two sections of undergraduate finance. This put me in constant contact with this wonderful mentor. I learned more in his office than I did in the classroom. When I graduated he advised me to attain a CA (chartered accountancy) degree at McGill. It positioned me as a professional with a true understanding of financial statements.

"I eventually used my accounting and finance skills to establish and develop, with three great partners, what would become a major Canadian investment management firm.

"Professor Potter led by example: he was kind, enjoyable, smart and a pleasure to be with. Among the many things he taught me was his definition of a good financial transaction: 'both parties are better off after the transaction than they were before.'

"Twenty-four years after I graduated, I returned to Concordia to establish the Kenneth Woods Portfolio Management Program as my way of giving back to the university and the investment community, and of remembering my favourite professor.

"Its two program directors, Abraham Brodt and Reena Atanasiadis, have been mentors to the students just as Professor Potter was to me. Seventeen years on, there are now more than 120 Calvin Potter Fellows with successful careers."

"As a young elementary student, I was told by my peers that the girls with the best grades would never succeed in real life. This made me sad, and when I confided in my loving grandfather, he told me, 'Just prove them wrong!'

"When I decided to launch my cosmetic company, no one believed in my dream: not the chemists I approached, not the retailers and not even the future consumers who answered absolutely negatively to the marketing research I commissioned.

"I did prove them wrong! 40 years later, the Lise Watier brand is still the top-selling brand in Quebec, and in drug stores across Canada.

"When I introduced my perfume Neiges in Paris in 1996 as a Christmas promotion at the Printemps de la Mode, I was humiliated by the Parisian buyer who simply said: 'We don’t need a Canadian perfume. This is a promotion for Canadian products — but perfumes? No thanks.'

"Finally, with the help of the Canadian Embassy, Neiges made it, and was the top-selling product of the entire Canadian Christmas season. I proved that buyer wrong! And with great pleasure.

"When people doubt your capabilities, believe in yourself and do your best to prove them wrong!"

David A. Martin begins with a love of books

"I have spent a lifetime learning. It started early on with a love of reading.

"As an only child, I spent many hours with every book I could get my hands on. From the education research I have seen, if you haven’t been a keen reader at an early age, you won’t catch up until you are 18.

"Reading is something I do every day. It is how I combine the different threads of possibility that lead to invention. It is how I choose what to work on, and how I find the intersection between customers’ needs and what is possible.

"The lesson I have learned is to keep learning new lessons. And reading helps me do just that."

"For my eighth commercial album, I released a collection of traditional spirituals, Songs of Freedom, as a companion to a documentary series of the same name in which I explore my heritage through music.

"I am descended from Black Loyalists.  In the early 1700s, my African ancestors were stolen from Cameroon and sold into slavery in the United States before escaping their slave masters to fight for the British during the War of Independence in exchange for their emancipation. They sailed to freedom in Nova Scotia and New Brunswick at the end of the 1700s. Spirituals were born out of multi-generational oppression.

"My ancestors needed not only to communicate with each other, but to express themselves, their faith and the unspeakable hardships they faced. These songs endure because of their intimacy, their immediacy and the universality of a mournful yet hopeful existence. They have strength and should be interpreted justly.

"Recording this album of spirituals was a huge challenge to my classical mind. With the core classical repertoire I normally tackle, I’m looking for ways in — how to access a musical language to which I feel connected but that needs, for all intents and purposes, to be 'unlocked.' I look to find a repertoire that reflects me and what I have to offer, not only as a singer but as a technician.

"Poulenc, Mahler, Duparc, Weill and Strauss are composers who speak to me technically AND spiritually. It’s as though I’m called to represent their works in a physical sense.

"With the traditional spiritual, it’s the reverse: I bring the spiritual to life in its entirety. I have free rein over how a spiritual is heard. The confines are stylistic, not a physical, through-composed score. I knit it together and put it on like a garment.  Through the interpretation and performance of spirituals, my classical mind has been rendered more flexible. It has fostered, at its core, an unbreakable spirit of empathy and inclusivity."


Measha Brueggergosman will address the Faculty of Fine Arts on Wednesday, June 7, at 7:30 p.m.

“A simple life lesson I was fortunate to learn early: We must ask for what we want from people who have, and not be restrained by our inner voice that says it's irrational.

"When I was trying to start my first company, I was an immigrant on an H-1B visa in the US. I had no relationships with investors. For that matter, I did not even know anyone who knew an investor.

"I had no experience starting a company, nor any track record of success in doing so. I simply chose to ask prospective investors, the people I didn’t know, for funding. I kept doing that until one amazing individual – Jim Gaither of Sutter Hill Ventures — chose to write me a cheque.

"It was an irrational thing to ask for funding. Fortunately, I did it anyway.

"When I wanted to come to North America for my master’s program, I couldn't understand why a foreign university would provide a scholarship to an unknown student. Concordia did. All I had to do was write a letter to the university and ask.

"I consider myself lucky and grateful to Concordia. In a small way, I eventually ended up contributing something to society — creating over 500 jobs, where people did amazing work. All I had to do was ask Concordia.

"We must ask for what we want, from people who have."

Consult the complete Concordia spring 2017 convocation schedule, and be sure to share your thoughts and photos on social media: #CUgrad and #CUalumni!