Motherhood, friendship and nationhood in the holy city 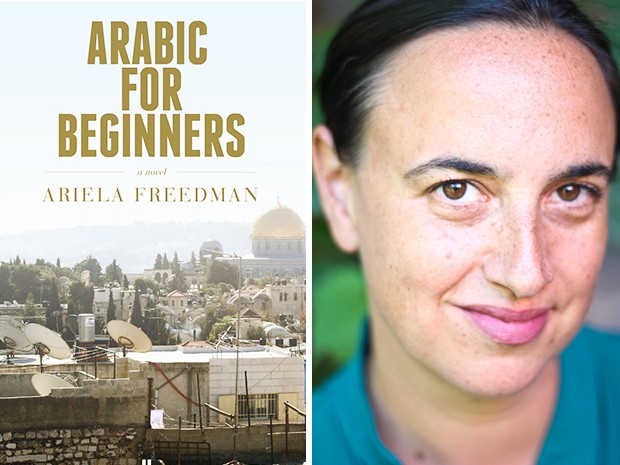 As the epicentre of three of the world’s largest religions, Jerusalem is a hotbed of devotion and strife. Indeed, much of the focus on Jerusalem in media and popular culture is centred around the complex geopolitical turmoil of this ancient land.

But what about the personal lives of those who make Jerusalem their home?

In her new novel, Arabic for Beginners, Ariela Freedman, associate professor with Concordia's Liberal Arts College in the Faculty of Arts and Science, explores the lives of a group of young mothers as they navigate the paradoxes of life in the Holy City.

Through the first-person narration of a Canadian ex-pat living in Jerusalem, Freedman uses the city as a backdrop to explore motherhood, friendship and nationhood.

“I wanted to write a book that delved into stories about early motherhood and the connections between women — a topic that isn’t discussed much in literature,” explains Freedman. “By exploring the private lives of these women, I also hope to add nuance to the complex socio-political realities they live in.”

Here is an excerpt from Arabic for Beginners.

'It was a little like safety was a myth'

Spending time with Jenna made me realize that back home, none of my friends smoked anymore. And all of my friends, every one of them, would have been appalled at Jenna’s behaviour. When they became parents they instantly turned into puritans. The wilder they had been, the stricter they now were. They quit smoking, quit drinking; not only would they not smoke in front of their children, if a man was smoking on the street they would glare at him as if he was a war criminal. They started buying organic food, used water filters on their taps and air filters in their homes, since North American air and water were no longer clean enough for them. They subjected their houses to inquisitions in which every dangerous object was unearthed and expunged; one friend had even told another to get rid of her houseplants.

I tried to imagine their reaction to Jenna, the way Jenna let her children play with her cigarettes, or ride in the car unbuckled. It was a little like safety was a myth she didn’t believe in. When I couldn’t help myself, and some word of warning bubbled out of my mouth, she would look at me as if I was childishly naive, as if I had no understanding of the difference between real and false danger.

And I could understand that. For all of our careful parental pursuit of security, we could not keep our children safe. The organic baby food and the obsessive baby proofing had the quality of magical thinking. We might as well have hung charms against the evil eye on their doors, or tied red strings around their chubby wrists. I knew a child who’d swelled and sickened and died in a year, despite all efforts to save her. I knew a girl whose blood had decided she was a stranger. I lived in denial of something that Jenna seemed to understand: motherhood was a surrendering of control.

Join Ariela Freedman for a panel discussion, “Is the Marriage of Literature and Religion a Good One?” during the Blue Metropolis Festival this Friday, April 28, at 8:30 p.m. You can also attend the release of Arabic for Beginners, part of the Linda Leith Publishing Launch, on the same evening at 6 p.m.