This March, 40 international student teams will converge on Concordia
|
By Amanda Clarke 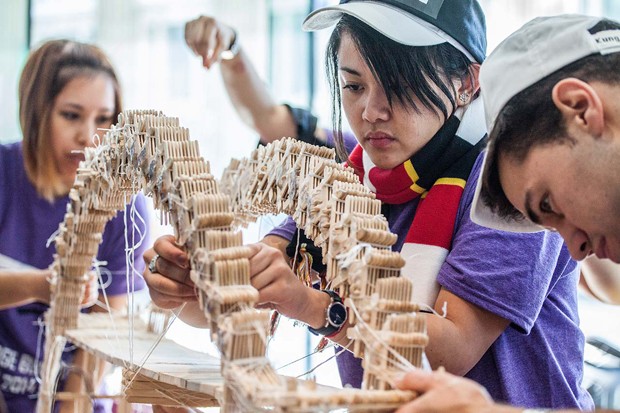 It’s a tradition that dates back to the 1960s at Sir George Williams University (one of Concordia’s founding institutions).

But it wasn’t until 1984 that Concordia’s Department of Building, Civil and Environmental Engineering held its first official bridge-making showdown, open to all the university’s students.

More than three decades later, the organizers of this year’s Troitsky Bridge Building Competition expect approximately 30 to 40 university teams from across North America and Europe to participate.

Concordia will host the annual event from March 3 to 6, as part of National Engineering Month. The deadline to register for the competition is Friday, February 17.

Rosalie Gomes is the director of Troitsky for Concordia’s Engineering and Computer Science Association (ECA). “The aim of the competition is to test participants on their design and building skills,” she says.

Each team makes a one metre-wide bridge using only dental floss, toothpicks, popsicle sticks and white glue. Once they’re submitted, the bridges are then subjected to “The Crusher,” a hydraulic press that tests strength and durability.

Want to see the building and crushing in action? Visit the atrium of the Engineering, Computer Science and Visual Arts (EV) Integrated Complex on Saturday, March 4, to admire the teams’ progress and ask them questions.

The official crushing ceremony happens on Sunday, March 5, in the Alumni Auditorium (H-110) on the ground floor of the Henry F. Hall Building.

The deadline to register your team for the competition is Friday, February 17.