This week marks the launch of Harold Innis Reflects, a new book edited by William Buxton, a communications professor from the Faculty of Arts and Science, with Michael R. Cheney and Paul Heyer. 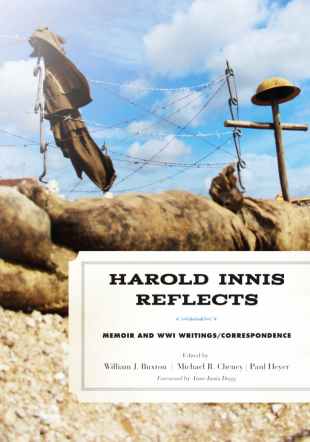 William Buxton launches his new book at the University of Toronto on October 14.

Darin Barney, who holds the Grierson Chair in Communication Studies at McGill University, calls the collection “a treasure trove for scholars of Innis, political economy, communication and Canadian history.”

Buxton will preview the book today, October 14, as part of his opening plenary address at the international Toronto School: Then, Now, Next conference.

He's also offering readers this sneak-peek excerpt from the collection: a draft of a speech Innis gave in Chicago in October of 1918, just before the end of the First World War.

“Innis had become involved in an organization called the ‘Four Minute Men’. It was composed mostly of returned soldiers who gave brief talks as part of the war effort, mostly encouraging people to buy liberty bonds,” Buxton says.

“These were often given in movie theatres during the brief intermissions when the reels were changed. I have no idea how it was received and if it had any impact. In general, historians seem to think that the program was a successful one.”

‘Will you see to it that your boys have a chance?’

During the space of four minutes at my disposal I know of no better way in which to absorb your attention than to relate to you my experience in France. This cane I have is a result of a wound received at Vimy and if I tell you something of war as I have realized it may help you to appreciate your duty at the present time.

Before the Canadians went over at Vimy months were spent in preparation. For one week we dug gun-pits. The next week we spent in carrying up ammunition toiling day in a day out wearing out the horses one by one but accomplishing our tasks slowly and surely. We spent little more than three or four hours per day but they constantly reminded us that our lives depended upon the ammunition and we dared not falter.

The next week we spent toiling through the mud and rain night after night carrying material up behind the front line and in preparation for the attack. The day of the attack everything had been prepared by weeks of toil and heavy work, Vimy never would have been the success it was. The Canadian casualty list would have doubled and tripled had it not been for the painstaking preparation.

You can help them if the preparations for every attack on the Germans by helping them with your money. If there is any way possible I know you will help them over even though it means sacrifices. Take my word I know what they are up against but I know you people are behind them with the last dollar.

The success of Vimy depended upon the preparation, calculation, and toil from staff officers to private. The first week we spent shovelling and sandbagging the hard white chalk of Vimy … rain or snow or shells ... gunpits were built.

The next week night after night we toiled up those roads to Vimy Ridge through the cold wet awful rains taking ammunition for the attack. The last week horses falling out by the roadside, men dropping out continually we waded up to our knees in mud and water carrying up material behind the front line. And the last night we waited in those trenches from three until 5:30 when we went over behind a perfect barrage of shells.

Our weeks of toil had not been in vain our lives had depended upon it. Contrast this with Neuve Chapelle — no ammunition the barbed wire held them up. They were mowed down with German machine guns – a failure – and thousands of lives lost. Life depended upon ammunition and it takes money to get ammunition.

We answer Germans’ five proposals .. it will be with the word fight or get off allied territory. Shall that fight be carried with ammunition (Shell Scandal, 1915) and be spared or will our boys be held up by barb (sic) wire?  Shall America have another Vimy Ridge or shall it be Neuve Chapelle? It will be either. Buy more bonds.

Find out more about Concordia’s Department of Communications.