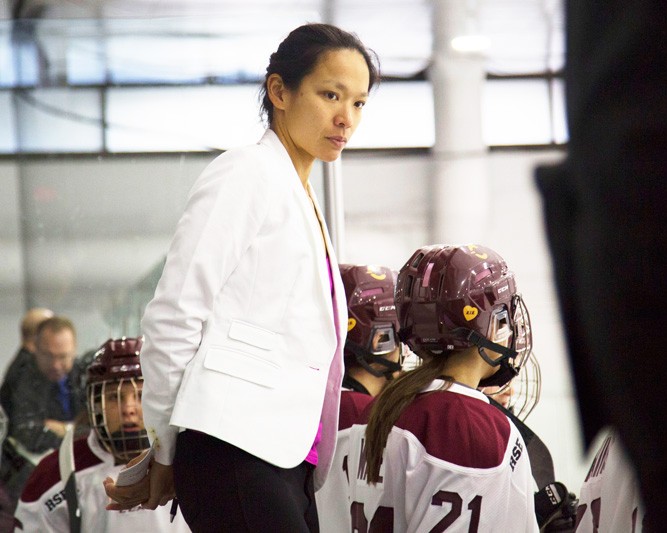 Julie Chu: “I like to think that we're always trying to be role models.” Photo by Brianna Thicke.

Back in March, when the Montreal Canadiennes professional women’s hockey team faced off against the Calgary Inferno for the Clarkson Cup, a dozen or so Concordia Stingers were in the stands.

They made the trip to Kanata, Ontario, to cheer on their head coach, Julie Chu. The 34-year-old American transplant wasn’t there to help out behind the bench, though — she was playing.

“It really meant a lot to me,” Chu says of the Stingers contingent that made the trip, adding that she hopes they took something away from watching her play in a major championship.

“I like to think that we're always trying to be role models. Hopefully I can give the girls an understanding of this.”

Of course, even seasoned professionals who are also head coaches give away the puck sometimes, or get caught out of position. But it’s how they manage these moments of weakness that counts, Chu says.

“We're still going to make mistakes. I think that's a big part of it. For them to be able to come to games sometimes and see the mistakes that I'm making, but also see the effort to correct those mistakes, that just helps ground them.”

Late last summer, Les Lawton, the veteran coach of the Concordia women’s hockey team went on medical leave, and Chu stepped in. This week, she was confirmed as his replacement. Chu plans to continue playing for the Canadiennes part-time, but her priority is the Stingers.

It makes for a busy winter schedule, but it’s worth it, Chu says. Beyond allowing her to set an example on the ice, Chu says staying on with the Canadiennes helps her relate to her players — she knows what it’s like to feel beat up and burnt out, and to have to rely on your teammates to get you up for a game.

And when she tells them how she deals with the highs and lows, they drink it up. “The girls are like sponges,” she says. “They want to learn, they want to get better and they’re willing to put in the hard work to get better, which I think is equally important … I'm so proud to be a part of this group.” 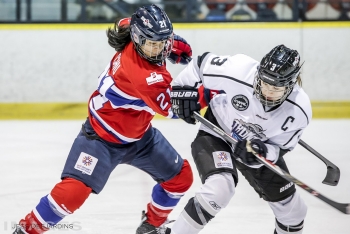 As a member of the United States women’s hockey team, Chu won three silver medals and one bronze at the Olympics, on top of five World Championships. In her first assistant coaching position, at the University of Minnesota Duluth, she helped the Bulldogs win the NCAA Division I National Championship in 2008.

She completed another assistant coaching stint at Union College in Schenectady, New York, before joining Concordia’s coaching staff in September 2014.

“Les has done such an incredible job,” she says. “When you have a program that you're proud of, you want to make sure that you bring in quality people that can add to your vision. For Les to trust enough in me and give me a chance to work with this program was incredible.”

Now that she’s officially Concordia’s head coach, Chu has no big plans to shake things up. For the time being, she’ll continue to improve upon what was already set up by her predecessor who led the Stingers to 15 provincial championships and two national titles.

“It's not about completely changing everything that's been set in place,” she says. “It's about enhancing the areas Les has already done an incredible job with, and then evolving some of the other areas, as coaching and sports continue to evolve.”

Coaching a university team for a run at the playoffs requires support, and while Chu expects to continue consulting with Lawton for guidance, she’ll also be relying heavily on assistant coach Mike McGrath.

“Our success is going to be directly dependent on those around me — our coaching staff and support staff,” she says. “It's really going to be a team effort, and I'm excited to work on the preparation for the season and then to get the girls back on campus.”

It’s still a couple of months before the Stingers return to the ice as a unit, but Chu can hardly wait to get underway. “I wish it wasn't June; I wish it was the end of August right now,” she says, laughing.

Find out more about the Concordia Stingers women's hockey team.