A true Stinger behind the bench 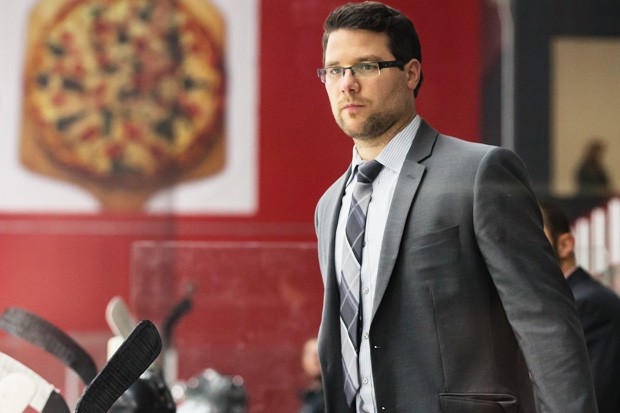 “It is a privilege to be a student-athlete representing your school.” | Photo by Marc Lafleur, Carleton University

The melting ice at the Ed Meagher Arena is erasing the stories of the past hockey season. Maintenance staff are busy preparing the rink for the yearly tasks required to keep the facility in top playing condition. The markings etched into the ice, traces of the ups and downs of the 2015–16 campaign are now gone.

Sitting in the empty stands contemplating the scene is Marc-André Élement, the newly appointed head coach of the Concordia Stingers men's hockey team.

“I can’t wait for the next season to start,” says Élement, a Concordia alumnus who graduated in 2011 with a BA in Human Relations.

He is now the permanent bench boss and looks forward to building on the progress made last season when he held the role on an interim basis.

“With 14 first-year players in our lineup last year, we spent a lot of time developing our system and our team approach both on and off the ice. We now have good momentum that will help move our hockey program forward.”

In 28 league games last season, the Stingers’ record of 10 wins, 12 losses and six overtime losses placed them seventh in the eastern division of the Ontario University Athletics (OAU) conference, an improvement from 2014–15.

An early exit from the post-season does not dampen Élement’s enthusiasm for what lies ahead.

“We finished the year strong with solid games against McGill and UQTR,” he says. “Our win at home in the Corey Cup shows that we can compete against the stronger teams in the league.”

He knows what it feels like to play in the annual challenge against Concordia’s eternal crosstown rivals from McGill.

In 2007, the Stingers lost 3-1 to the Redman before a crowd of over 5,000 hockey fans at the Bell Centre. Élement wore number 15 and remembers the game well.

“The atmosphere was electric. Although it is just one game in the season, it has a symbolic meaning.”

This is but one of the many great memories he has of his time as a player at Concordia. 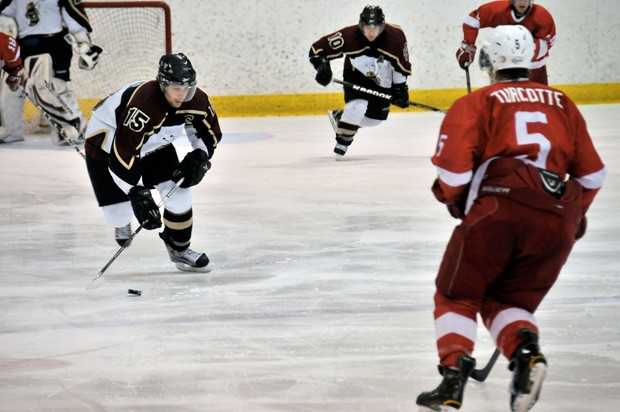 Marc-André Element played right wing for the Stingers from 2006 to 2011. | Photo by Concordia University

For Élement, the Stinger logo has a deep and personal meaning.

The leadership role he now performs from behind the bench in a suit and tie was developed while he was wearing the maroon and gold jersey from 2006 to 2011. He was an assistant captain in the 2008–09 season and then proudly wore the “C” on his jersey in his last two years.

When standing in the team’s dressing room, there is no doubt where you are. The Stinger identity is ubiquitous — Élement has made sure of that. The words “commitment” and “relentless” dominate the space over the players’ individual stalls and numerous motivational messages are strategically placed throughout.

“It is important for us to develop a strong identity as a team and as students,” Élement says.

The dressing room also reflects the coach’s insistence on academic performance. Prominently displayed are the names of players who are Academic All-Canadians, a Canadian Interuniversity Sport honour reserved for student athletes who achieve an academic standard of 80 per cent or better while playing on a varsity team.

“Our identity carries over from the ice to the classroom and vice versa.”

When asked about which coach he admires the most,  Élement is somewhat hesitant. While he respects the work Barry Trotz has done with the Washington Capitals of the National Hockey League, he does not name a clear favourite.

“I like to observe and analyze different coaching methods and systems,” he says. Numerous coaches inspired him when he was a player and “the best ones adapted their approach to what worked best for the team.”

Élement transitioned quickly from player to coach. Once his varsity career was over, he stayed connected to his alma mater by taking on the role of assistant coach with the Stingers in 2011–12, 2012–13 and a portion of the 2014–15 season before accepting the position of head coach with the Lachine Maroons in the Quebec Junior AAA Hockey League.

He also worked as an assistant coach with the midget AAA Châteauguay Grenadiers in 2013–14. The Grenadiers won the Quebec league title and went on to win a silver medal at the Telus Cup national championship.

The opportunity to take on the head coaching job at Concordia is a dream come true. “I know what it feels like to be sitting in this room. It is a privilege to be a student-athlete representing your school,”  Élement says.

“I want to instill in each player a sense of responsibility and a strong work ethic both on and off the ice.”

Ready for his second season

Élement remembers well his first game as interim head coach behind the bench of the Stingers — a 5-2 win over the Ryerson Rams at the famed Maple Leaf Gardens in Toronto on October 9, 2015. He still has the game puck given to him by the players afterwards.

“It was a great start to the season, and an exciting new beginning for me,” he says proudly.

He is wasting no time preparing for the upcoming season. He has secured commitments from a number of high-level players, adding to an already talented roster.

One thing is certain, the path to a successful hockey season starts early. Far before the maintenance staff have put in place a bright and pristine new ice surface upon which the story of the team’s next season will unfold, its eager and motivated coach will have already written the opening chapters.

Visit the Concordia Stingers online for the latest on all of the university's varsity teams.