My experience living on the streets of Montreal

From March 13 to 18, support Concordia's 5 Days for the Homeless fundraising campaign
By Josh Redler 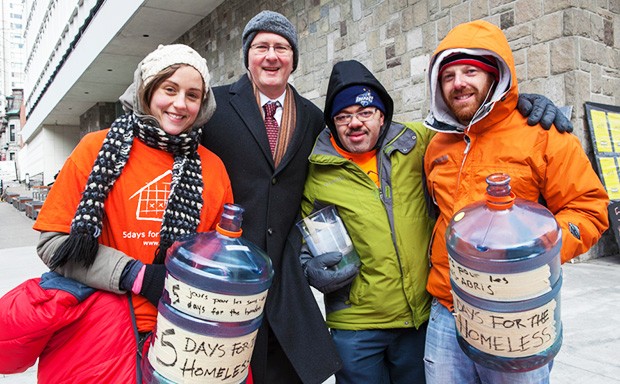 This year, proceeds from 5 days for the Homeless will benefit the organizations Dans La Rue and Chez Doris.

I should start by saying that I have never been homeless, though I have temporarily given up all my comforts to experience what it’s like to live on the street and to raise money for those who do.

I know what it feels like to have no spending money, no access to shelter when it's cold and wet, no change of clothes, and no knowledge of where my next meal is coming from.

I joined 5 Days for the Homeless late in 2007. Thanks in part to the amazing publicity we received, Montrealers from all walks of life made sure we were fed and cared for with kindness and donations. We raised $42,000 that year.

Jump forward to 2015, and 5 Days had grown to 24 universities across Canada, raising more than $195,000 last year for homeless charities nationwide. The campaign has raised more than $1.6 million to date.

This year, the national campaign hopes to raise $250,000 to support different community organizations. Proceeds from the Concordia 5 Days for the Homeless campaign will benefit Dans La Rue, which helps at-risk teens, and Chez Doris, a day shelter for women.

I have seen and experienced many highs and lows during my 40 days spent on the streets of Montreal. One of my favourite experiences every year is watching new participants get shell-shocked — the moment when they realize what it's like to feel invisible and alone while hundreds of people pass you by.

Each year I am inspired by the generosity of friends and strangers alike — from kind words of support to the anonymous donor who gave $15,000.

My continued goal is not only to raise much-needed funds for local charities, but also to get as many people as possible to give up the comforts of home for a night and walk in the shoes of someone living on the streets.

It's not easy spending 120 hours without a place to call home, and for some even 24 hours is a daunting task, but it really puts homeless life into perspective when you've given up everything, and you’re just hoping that someone lends you a hand.

We can all make a difference in our communities, even if it's a small contribution. If I inspire only a few more people to take the initiative, I’ll feel I have done my part.

Watch the new video promoting the national 5 Days for the Homeless campaign.

Stéphane Brutus, interim dean of the John Molson School of Business is among the community members taking to the streets for this year's 5 Days for the Homeless Campaign at Concordia. Are you interested in participating? Find out how to volunteer or donate.