10 great books on love (and one fine opera, too) 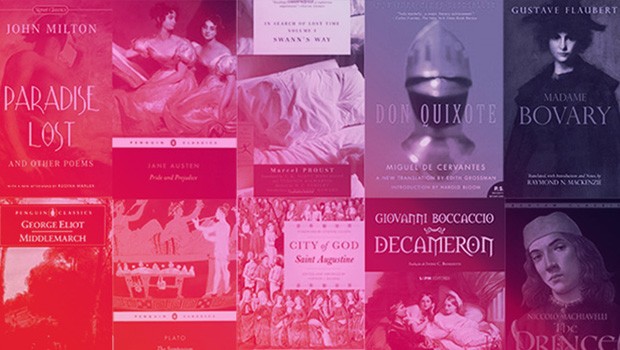 Nothing says romance like curling up with … a good book.

As a prelude to the Liberal Arts College’s (LAC) April 1 and 2 conference On Love, and also to celebrate Valentine’s Day, faculty members of the LAC agreed to share some musings about their favourite books on love.

To highlight the college's academic offering, the professors chose to focus their attention on works included in its core curriculum. They even added an opera for good measure! 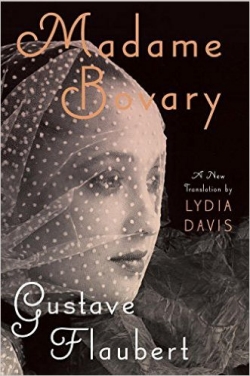 Gustave Flaubert’s Madame Bovary has been accurately described as the first sex-and-shopping novel. Emma is a farmer’s daughter with a head full of romantic fantasies. From cheap novelettes she learns that love is about “aching hearts, promising, sobbing, kisses and tears, little boats by moonlight, nightingales in the grove.”

Devouring historical novels, she dreams of living “in some old manor-house, like those chatelaines in their old corsages, under their trefoiled Gothic arches, spending their days, elbows on the parapet and chin in hand, looking out far across the fields for the white-plumed rider galloping towards her on his black horse.”

Neither her husband, a bumbling and bungling provincial doctor, nor her two lovers, a practised seducer and a feckless young man, come close to matching her expectations of rapture and bliss in exotic and expensive surroundings. What undoes her in the end, however, is not so much adultery as overindulgence in retail therapy.

Flaubert’s attitude to his heroine is exquisitely poised between sarcasm and sympathy, and his descriptions of her world make the smallest detail come to vivid life. Predictably, the story does not end well, but the bleakness is regularly relieved by justly famous comic set pieces. 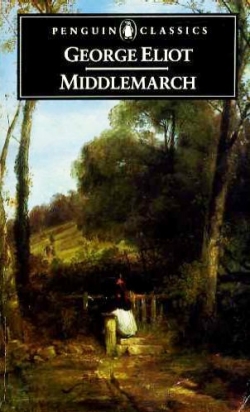 In Middlemarch, a book that anatomizes the hidden contours of the human psyche with as sure a hand as the most accomplished surgeon, George Eliot wonders whether it’s “due to excess of poetry or of stupidity” that we never weary of listening to troubadours extol the beauty of a maiden fair, while showing little interest in that other, intellectual beauty that must be wooed with hard work and renunciation.

Many are struck by Cupid’s gold-tipped arrows, far fewer by the love of knowledge; many have sung the enduring sorrows and fleeting satisfactions of romantic love, far fewer the no-less gripping story of this other passion, the love of knowledge. In Eliot, intellectual passion has found its high priestess and most accomplished poet; in the Liberal Arts College, it has found its temple and its congregation. 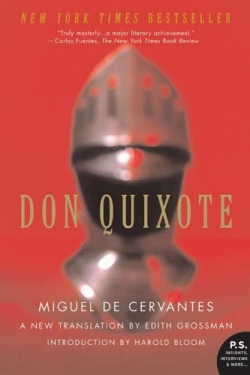 In the course of interviewing a series of rascals, all chained together and destined for the King’s galleys, Don Quixote is astounded to learn that one of these poor devils has been sent to the galleys for falling in love.

“What!” he exclaims, “If men are condemned to the galleys for love, then I should have joined them long ago!” “Ah,” responds the galley slave, “but it’s not for the sort of love that you have in mind that I’ve been condemned, but because I happened upon a washing basket full of white linen to which I took such a strong liking, that even the full force of the law couldn’t wrest it from my hands.”

And what student would ever blame the galley slave? Clean clothing is often as rare a commodity, and as worthy of love, as any Helen or Adonis.

Who hasn’t heard of Pyramus’s love for Thisbe in the Metamorphoses, Dido’s for Aeneas in the Aeneid, or Dante’s for Beatrice in the Divine Comedy? Less noted, though worthier by far of celebration, is Sancho Panza’s love for his donkey in Don Quixote.

Devastated to discover that his donkey has disappeared, Sancho breaks into tears, and cries: “Oh child of my bowels, born under my roof, my children’s companion, comfort to my wife, envy of my neighbours, lightener of my burdens, and, finally, source of half my livelihood, since the twenty-six maravedís you earned each day covered half my expenses!”

Did Pasiphae’s love for a well-horned bull, or Narcissus’s for his delicate reflection, or even Orpheus’s for his lost Eurydice ever produce such a moving testament to love’s power? 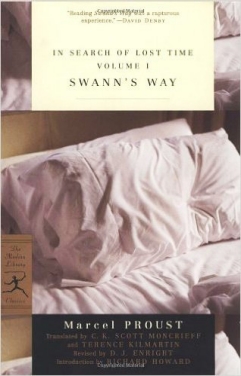 The second section of Swann's Way forms a self-contained novella, and tells the story of Charles Swann's obsession with Odette de Crécy, from disinterest to infatuation to consummation to ravaging jealousy. Proust breaks down the different stages of the tempestuous love affair in merciless detail and glorious prose. Love hurts indeed. 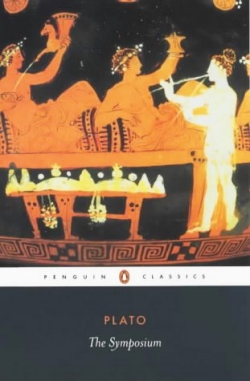 What do we seek after as lovers? To live in eternal union with our beloved? But why is love then so painful? Why do lovers die of (and for) love? Is eros a disease of human nature or the cure of all the ills that afflict us? 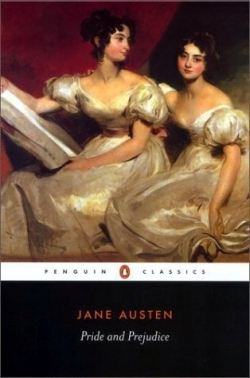 Jane Austen shows that “First Impressions” (her original title for the novel) are not the best foundation for romantic love.

Pride and Prejudice resembles great works such Oedipus Rex and King Lear because it shows characters who must change their minds about what they believe to be true.

Instead of tragedy, however, we get romantic comedy, as Austen demonstrates through her witty plot how self-knowledge is necessary to see others clearly and crucial for happiness. Initially, Fitzwilliam Darcy judges Elizabeth Bennet as tolerable, but not attractive enough for him.

Elizabeth condemns Darcy as arrogant and rude. Austen challenges the sentimental notion of love at first sight with her entertaining and ironic depiction of how her memorable characters fall in love. 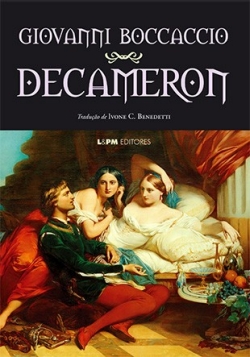 There was once a young and presumptuous Christian hermit called Rustico who was eager to prove to himself that he possessed an iron will, stronger than all the temptations of the devil.

There came to his cell one day a simple-natured girl of perhaps seventeen, very beautiful and pure, named Alibech. Find out how the hermit trained the girl (to the point of exhaustion) in matters of theology and resurrection of the flesh by teaching her how to “put the devil back in Hell…”

One of a hundred delightful novellas from Boccaccio’s immortal “Ten Days” of story telling. 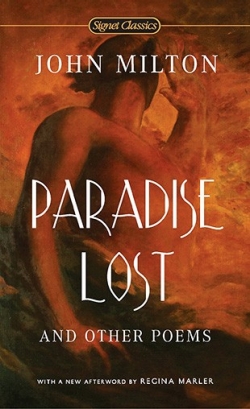 With its spectacular descriptions of celestial warfare and a Satan so appealing (at least at first) that Romantic poets all fell for his grandstanding oratory, John Milton’s Paradise Lost, a verse epic in 12 books, first published in the 1660s, is not an obvious Valentine’s Day read.

But at the very least it will help you find out both whether there is sex among angels (well, sort of) and whether there was sex in Eden (yes, and it was better than you can possibly imagine). Most importantly, the story of Adam and Eve both before and after that best sex ever becomes in Milton’s hands a compelling love story, comic and tragic by turns.

Formed by God out of Adam’s rib, Eve is at first unimpressed by the man whose companion she is meant to be and finds her own reflection in a pond much more attractive.

A period of perfect serenity follows this inauspicious beginning, until Satan infiltrates Eden and manages to talk Eve into eating the forbidden fruit. Unable to imagine life without Eve, Adam willingly joins her in damnation, sacrificing reason to passion and condemning all his human descendants to a life of hardship, with death at the end.

Yet the depth of his feelings for Eve is such that we can hardly blame him. By the time Adam and Eve are evicted from Eden they have had the first marital row in history (setting high standards for vituperation of this kind), but they have also accepted each other’s human fallibility and are ready to face their new world together, “with wandering steps and slow” but “hand in hand.” 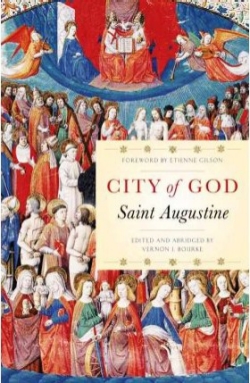 For many, this enormous work would perhaps not be the obvious choice for a great book on love, but it is undeniably love centred. Augustine argues that all human beings, even whole civilizations, are best known and understood by what they love. All our laudable successes and colossal failures, excelling virtues and depraved vices — such as greed — are manifestations of our deep-seated capacity to love.

For Augustine, all of our loves are best understood as versions of the love for God but directed toward objects that we perceive as good. Since many people fail to recognize the divine origin of our loves, City of God also explains why they are so often restless and unfulfilled, and why even in lives of great misery, human beings do not cease to love. 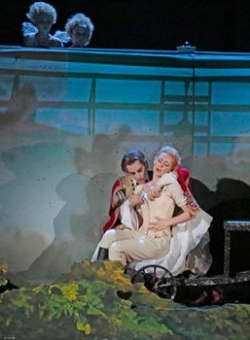 Two young soldiers enter into a wager with their older cynical philosopher friend: their fiancées, sisters Dorabella and Fiordiligi, will remain faithful.

The women’s “test” (for women are inconstant) prompts a comedy of manners.

A farcical romp with disguises, swapping of partners and the like, yet serious about matters of the heart.

A misogynist Mozart? Not so: Cosὶ fan tutte’s school for lovers is eminently co-educational, the ambiguities of love (its thrills, its betrayals) test and teach the sexes alike. And Fiordiligi, despite herself, finds she’s truly in love —  with Dorabella’s lover….

Opera is drama in music and music does the seducing. Here it’s also the voice of sincerity amidst posturing theatrics. However ambiguous or arbitrary its effect, and unfettered by the barrier of words, the music gives an all-too-human, often melancholic dimension — which speaks to us all. 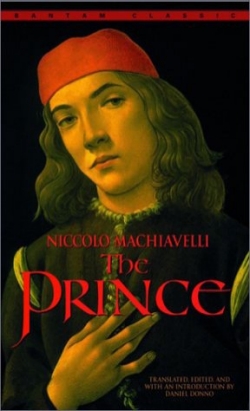 The Prince
by Niccolò Machiavelli (1512)

“Love” in Machiavelli (1496-1527) is usually associated with a famous passage from Chapter XVII of his famous work The Prince (“Cruelty and Mercifulness, and Whether it is Better to be Loved or Feared”.)

“My view,” he writes, “is that it is desirable to be both feared and loved but,” given the weakness and unreliability of men, “it is difficult to achieve both and, if one of them has to be lacking, it is much safer to be feared than loved.”

This supposedly reflects the Florentine Chancellor’s instrumentalist, “power political” vision, his concern with a political dynamic untrammeled by moral considerations. Yet this single passage, from a single work, cannot be generalized.

Machiavelli, a classicizing humanist and famous poeta, was familiar with the work of Dante, Boccaccio and novellists like Sachetti.

In his complex oeuvre — The Discourses on Livy, The Histories of Florence, his Art of War, plays like The Ass, his comedy La Mandragola and his Letters — he expressed different kinds of love.

And it is worth noting that in the last chapter of the Prince itself (XXVI), “Exhortation to Liberate Italy from the Barbarian Yoke”, the republican chancellor of Florence (sent into exile by the Medici who overthrew the Republic in 1512), writes of the disunity and suffering of the peninsular attendant upon the French, and the Spanish, invasions after 1494.

Dropping the “instrumentalist”, power-political mode, breaking into lyrical Biblical language and, for the only time in the work, invoking God’s aid, Machiavelli ends the Chapter, and the book, hoping for a political saviour, and citing part of Petrarch’s great 14th century ode Italia mea (Ai Signori d’Italia), “My Italy (To the Lords of Italy):

“Valor will take up arms against wild attacks
and make the battle short, for the ancient valor
in Italian hearts is not yet dead.”

Do you have a favourite book about love you think your fellow Concordians should read? Share it via Twitter or Facebook. Be sure to add @concordia and #CUReads.