Students test their skills and strategies every Wednesday evening. Plus: what's a "meeple"?
|
By Meagan Boisse 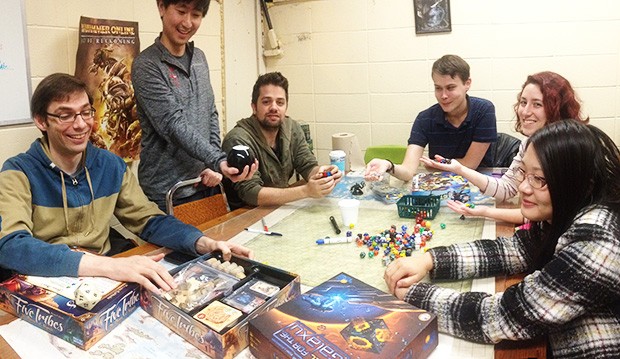 "It's a great de-stressor…" Concordia's Games Club at a recent meet-up on the Loyola Campus.

Meagan Boisse studies in the Department of Journalism. For her current undergraduate work term with the Institute for Co-operative Education, she is employed as a roving reporter at Concordia.ca.

Being someone who is competitive yet athletically challenged — I’m the kid that got ski trips cancelled at my elementary school after breaking a leg — I like board games because they let me gratify my combative nature without fear of mind-numbing pain.

And so it was with great fervor that I hopped onto the shuttle bus after work this week and journeyed to Loyola Campus to meet the good men and women of the Concordia Games Club, who’ve held open board game nights every Wednesday evening for years.

As Andrew Morrison, a PhD candidate in Mechanical Engineering and long-time club member, will tell you, “beating someone with your brains is just as satisfying as beating them physically, if not more.”

Born in the 1960s, the Games Club is one of the oldest on campus, a fact seen in the vintage games that line its shelves.

Morrison was setting the stage for battle when I walked into the club’s nook of a room, charmingly decorated with nerdy paraphernalia – such as a psychedelic wizard/unicorn poster. You know, because wizards and unicorns have so much more to offer when combined.

On the evening’s docket, Five Tribes, a popular game that combines human trafficking and victory camels as aspects of game play.

It wasn’t long before others joined and meeples (that’s gamer lingo for pawns) were flying around the board. 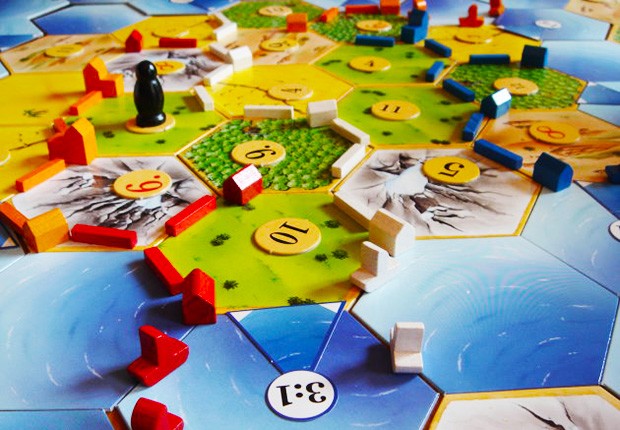 While a university games club might seem archaic in the age of screens, Morrison notes that table-top games have seen a revival since Settlers of Catan became generation-Y’s monopoly.

“Board games are great because they present you with a series of interesting decisions to make,” he says, before sharing two funny stories about the club that both happen to involve him beating everyone.

“There’s a social dynamic to board games that isn’t there with computer and video games; it’s more interactive.”

As it turns out, the sale of table-top games has risen between 25 per cent and 40 per cent annually over the past few years; a testament to the enduring appeal of sitting around a table and destroying your friends with carefully maneuvered meeples.

“I’m actually not much of a gamer,” admits Miwa Yamai as she looks at her tiny legion of pink camels.

Yamai, a foreign exchange student from Japan, may not be a game enthusiast per se, but she came to the club because it represented a fun way to meet others in an interactive setting.

“My favourite memories are never of me winning, it's always of someone else f—king up spectacularly,” he says, before giving a detailed account of how his friend Mitchel Shore (also at the table) had done just that while playing Liar’s Dice.

Despite jokes and teasing, there’s a palpable geniality in the room that makes the competition feel friendly and fun. This might explain why students, such as Rebecca Kaeser, still come around even after finishing their degrees at Concordia.

“It’s a great de-stressor, it helps you unwind at the end of the day,” says Kaeser.

After a two-and-a-half hour tournament that saw many a meeple displaced, I forced the end of the game by placing my last victory camel on the board. Smugly, I thought about how fun it was going to be to immortalize my win through Concordia News.

Unbeknownst to me, putting your last camel down doesn’t immediately end the game, it just calls the last turn. My opponents were able to collect additional points, leaving me in last place. Victory was not in the cards (pun intended).

The Concordia Game Club meets every Wednesday at 6:45 p.m. in Room SC 03-11 of the Student Centre Building.

Want to get your game on? Here are the Concordia Games Club's top picks.

1. Seven Wonders is a card development game in which you, as the leader of one of the seven great cities of the Ancient world, vie against your opponents for control of resources, commercial routes, and military supremacy.

2. Puerto Rico is a resource cycle game that sees players assume the roles of colonial governors on the island of Puerto Rico. The aim of the game is to make the most victory points by shipping goods or constructing buildings.

3. Anomia is a card game that puts common knowledge to use. Players flip cards in turn until the symbols on two players’ cards match. They then race each other to give an example of the category on their opponent’s card first.

4. Munchkin is a card game that involves a dungeon adventure with lots of killing, backstabbing, and stealing. You’ll love it.