“Almost any time you are online, you can be monitored.”

A postdoctoral researcher at Concordia’s Mobile Media Lab has developed a device to help you evade Big Brother. And it fits inside a suitcase.

Evan Light is a former information technology professional concerned about the prevalence and impact of online surveillance in our day-to-day lives. He has designed a mobile machine to shield users from online spying when they’re accessing data leaked by famed privacy activist and whistle-blower Edward Snowden.

On November 26 at Concordia, Light will take part in a panel discussion on mass surveillance, hosted by Amnesty International Canada and the non-governmental organization's Concordia group.

He’ll be joined on the panel by Hilary Homes from Amnesty International Canada; anthropologist, academic and author Gabriella Coleman; and Dominique Peschard, co-chair of the International Civil Liberties Monitoring Group and a frequent speaker on the proliferation of surveillance and control mechanisms.

The discussion will follow a special screening of Citizenfour, the Edward Snowden documentary by Laura Poitras that had its Quebec premiere at Concordia during last year’s Montreal International Documentary Film Festival.

A former NSA employee, Snowden leaked massive amounts of classified data from the agency in 2013. It revealed the extent to which the government was spying on ordinary citizens.

“Almost any time you are online, you can be monitored,” says Light. “The internet, by its very nature, is completely insecure.”

The Portable Snowden Surveillance Archive might not be much to look at from the outside. The machine is housed in a suitcase that looks like it’s straight out of a James Bond film — circa 1962. The device inside is also simple — made of two thin panes of Plexiglas, wooden framing, a data card, some circuit boards and a small screen — but the information it contains is powerful.

“It allows anyone who wants to access the Snowden files to do so in a surveillance-free way,” explains Light, who began the project as part of Performigrations, a European Union–funded project that is touring eight major Canadian and European cities, using a variety of artistic and digital platforms to examine issues of migration and mobility.

The machine made its debut at the 2015 Blue Metropolis literary festival in Montreal. It is based on the Snowden Digital Surveillance Archive, built by the Canadian Journalists for Free Expression and Andrew Clement from the University of Toronto.

“My initial inspiration for the machine was the WikiLeaks embargo,” says Light. It involved powerful actors such as the U.S. government, Visa, MasterCard and PayPal restricting people’s abilities to donate to the online site, which is dedicated to leaking classified information.

“WikiLeaks was sort of pushed offline,” says Light, who started to think of ways information seekers could work around such controls.

“If you don’t have an online choke point, and if your archive is actually decentralized and there are multiples of them, then that can’t necessarily happen,” explains Light. The Portable Snowden Surveillance Archive was born.

The machine, which runs offline, allows users to access all published documents leaked by Snowden. Unfortunately, the majority of the documents, leaked to journalists, remain unpublished.

Light made the machine in roughly two weeks, for a cost of about $140. The archive itself lives on a 32-gigabyte memory card that costs under $30.

Light will soon be putting up a website with do-it-yourself instructions on building your own Snowden Surveillance Archive machine. “You don’t need to know anything about technology, really,” promises Light. “You just need to know how to plug things in, and follow instructions.”

Since his portable archive made its debut in Montreal, Light has been taking his suitcase on a mini world tour, with stops in Bologna, Cardiff, Leeds, London, Berlin and the University of Cambridge, where a version of the machine remains. 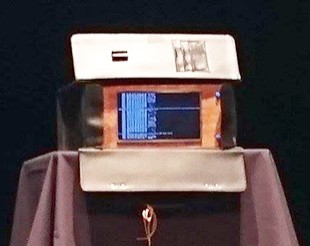 “They have it installed as a museum piece on display until the end of the term. Then they will start using it for teaching,” says Light.

Light is thrilled with the reaction his invention has been getting. “None of this would be possible without Concordia’s Mobile Media Lab, and Kim Sawchuk,” he says.

Sawchuk, a professor in the Department of Communication Studies, is one of the lab’s directors, and Light’s postdoctoral supervisor.

Does Light think he’ll ever connect with Snowden in person? “We’ll see — it seems like he’s a pretty busy guy,” Light says and laughs.

“I’m looking at different strategies for dealing with mass surveillance, and taking control of telecommunications networks that don’t necessarily represent the interests of their customers,” explains Light.

He’s investigating solutions like shareholder activism, which includes the idea of creating activist mutual funds to invest in telecommunications companies with the goal of introducing anti-surveillance policies and protecting privacy.

Light hopes his work will not only deepen the field of study surrounding surveillance issues, but also inspire citizens to think more about the ways in which their data is being collected, and their online behaviour monitored.

“Surveillance is really a very long-term project,” Light says. “We never know where our politics are headed, and we never know who is going to be in power, and what side of that relationship we are going to be on.

“And what mass surveillance means is that people are not necessarily targeted as individuals. We are targeted because we all might do something wrong, or something that may be considered wrong in the future.

“When I give talks about this, I say to a room full of academics, who may be in long-distance relationships, ‘Has anybody ever used a webcam to keep in touch with your loved one?’ You’ve probably been watched.”

A screening of Citizenfour, a documentary about Edward Snowden and the National Security Agency (NSA) spying scandal, will be followed by a panel discussion on mass surveillance, on November 26, from 5:30 to 9:30 p.m.

The event will take place in the Alumni Auditorium (H-110) of the Henry F. Hall Building on the Sir George Williams Campus. Both the screening and the panel discussion are free and open to the public.

Find out more about the Mobile Media Lab.