“Father O’Brien believed media could be a powerful tool for good and serve social justice, integrity and ethics.”

Reverend John (Jack) E. O’Brien, professor emeritus and founder of Concordia’s Department of Communication Studies, passed away on Nov, 07, 2015. He was 91. Here’s a look back at his singular contribution to the university.

Half a century ago Father John (Jack) O’Brien returned to Loyola College after five years at the University of Southern California, armed with a doctorate and a vision.

The year was 1964 and, as Bob Dylan said, the times they were a-changin’. Not long before, American audiences had watched their young president die, and listened as voices emerged from the periphery, preaching defiance and change across the nation.

A step ahead of the game, the young Jesuit saw a societal need to bring communication studies to Canada and develop a program capable of critical response.

However, his proposal failed to create much excitement among the administration at Loyola, who were unconvinced it would elicit much attention from the student body. Still, they let O’Brien try out one course, an elective titled Media and Society, to see how it would go.

“They told him he’d be lucky if he had seven or eight students register for this class,” recalls Sheelah O’Neill, coordinator of the Department for Communication Studies. “He ended up with 60.” 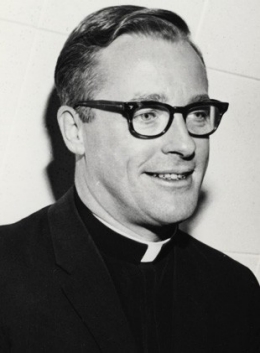 The following year, life officially began for the Department of Communication Arts, the first of its kind in Canada. It was later renamed Communication Studies.

“The department grew from a small program, with a handful of people teaching and a handful of students, to one of the signature programs in Concordia and across the country,” says Sandra Gabriele, associate professor and chair of the Department of Communication Studies.

The department deals with current issues in communications, but also prepares students for the future, says Murphy, who began teaching at Concordia in the fall of 1970, and still teaches an online course today.

“I am not referring to ensuring them a job or a skill, but to developing their thinking about their social responsibility, ethics and respect for future audiences and content.”

“The department has added programs and diversified in terms of the skills we teach,” says Gabriele. “What has remained, however, is a constant commitment to critical thinking and critical media making. We owe that to the leadership and vision established in ’65 by Father O’Brien.”

The department currently offers five programs, including a graduate diploma designed for students coming from other disciplines, an MA in Media Studies and a joint PhD offered in partnership with Université de Montréal and Université du Québec à Montréal.

“The strength of our reputation comes from our pedagogy and faculty. We have the top communication studies researchers in the country in one department,” says Gabriele. “Every year, the department garners millions of dollars in research funding, and we bring that research into the classroom, which means our students are exposed to cutting-edge thinking all the time.” 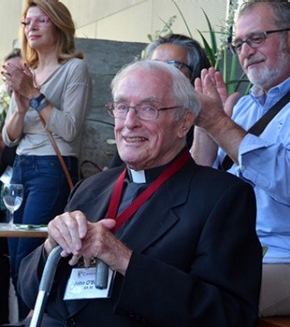 The innovative spirit of the department can be seen in its willingness to expand its curriculum beyond traditional notions of mass media. It was the first to offer a course on Indigenous media, and one of the first to look at media and race, ethnicity and gender issues, as well as alternative and community-based media.

“It wasn’t just about teaching students the skills they needed, but rather going beyond that to foster critical insights that would let them be good media makers and citizens,” says Gabriele.

Taddeo, who wore many hats during his time at Concordia (dean, administrator and professor), vividly recalls his first encounter with Father O’Brien back in ’64. He was waiting in line to register for classes when he noticed the Jesuit priest was offering an interesting elective.

“I thought, ‘Oh my God, that looks like fun. Radio, TV, movies …’ And Father Jack was sitting there, big smile as usual,” says Taddeo. “As it turned out, it was no Mickey Mouse course. It was challenging and interesting, and it inspired me tremendously.”

Taddeo says the department fosters collegiality among students and faculty, and builds a sense of togetherness that is enduring.

“It really functions like a small community,” he says, noting that it still applies the same holistic approach to admissions as it did in ’65, requiring all applicants go through an interview process — unusual for an undergraduate program.

“Father O’Brien envisioned that we could understand media through a combination of its critical and technical dimensions, and make sure it serves society and doesn’t exploit it,” says Taddeo.

“He believed media could be a powerful tool for good, and serve social justice, integrity and ethics. That vision has lived on, and has been the department’s distinguishing characteristic for fifty years.”

Find out more about the Department of Communication Studies and its programs.