Quartier Concordia: from the sacred to the secular 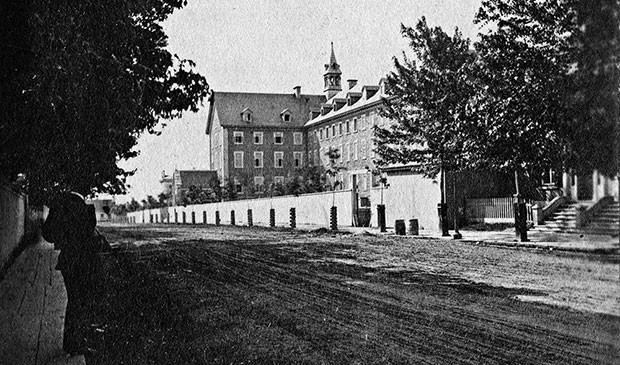 “It’s a reflection of the fundamental changes in Quebec society, 100 years after these communities established themselves in the neighbourhood,” says Clarence Epstein. | Photo courtesy of McCord Museum

Concordia officially opened the renovated Grey Nuns Building just over a year ago. The university converted the former home of the Sisters of Charity of Montreal (Grey Nuns) religious congregation into a 600-space student residence, reading room and daycare.

But as a new public exhibition shows, the former convent is not the only religious institution in the neighbourhood that has been re-purposed or turned into residential units or educational facilities.

You’ll find From Sacred to Secular, the sixth instalment in the Quartier Concordia series, on the vitrines of the Engineering, Computer Science and Visual Arts Integrated Complex, running along Guy Street. It showcases a half-dozen religious congregations in the immediate vicinity of the Sir George Williams Campus.

The purpose of the exhibition series is to explore the relationships between the downtown campus and its larger physical context, says Clarence Epstein, senior director of Urban and Cultural Affairs for the university, who leads the project. “This edition underlines how critical the real-estate plans of the religious orders were to the property development of this area.”

Only one of the buildings, the Seminary of Montreal, is still being partially used for its original purpose, which is to educate priests. Founded 175 years ago, the seminary property is also home to Collège de Montréal, a private secondary school.

The other sites featured in the display, including the Grey Nuns Motherhouse, are either converted or in the process of being adapted for secular use.

One of them, the Franciscan church on René Lévesque Boulevard, burned down in 2010, and the land is now slated for condominium development.

Another is the sixth mother house of the Congrégation de Notre-Dame, which was taken over by Dawson College in the 1980s.

All six properties were built between 1840 and 1911. Epstein says their new vocations signal an important change in the kinds of tenants inhabiting the area, which include large-scale educational institutions, such as Concordia. “It’s a reflection of the fundamental changes in Quebec society, 100 years after these communities established themselves in the neighbourhood.”

A visit from the Grey Nuns

Photographs taken during a recent visit by the Sisters of Charity to their former Motherhouse — juxtaposed with archival images — show its transformation into an integral part of Concordia's downtown campus.

This week, the university welcomed 57 members of the Sisters of Charity of Montreal Congregation back to their former mother house, now the Grey Nuns Building.

The visit was in anticipation of the Congregational Chapter meeting, planned for 2016. Held every five years, the large event brings together members of the religious community from all over the world to discuss its future direction and elect new members to its administrative council.

Epstein and university librarian Guylaine Beaudry welcomed the sisters to the newly renovated building. Afterwards, the group met with Philip Lichti, digital media and services coordinator with Concordia’s Centre for Oral History and Digital Storytelling. He’ll be working with the Congregation on a project to preserve their stories of life in the Mother House.

The sisters then visited the former Chapel of the Invention of the Holy Cross. Now part of Concordia’s libraries, the space has been converted into a Reading Room.

The sisters joined several members of the university’s community for tea in the former “Salle de la communauté” and presented their hosts with a basket of apples freshly picked in Châteauguay, where they were heading back to, in time for a congregational dinner.

Find out more about the history of Concordia’s Grey Nuns Building.