On the road (and ice) with the Stingers 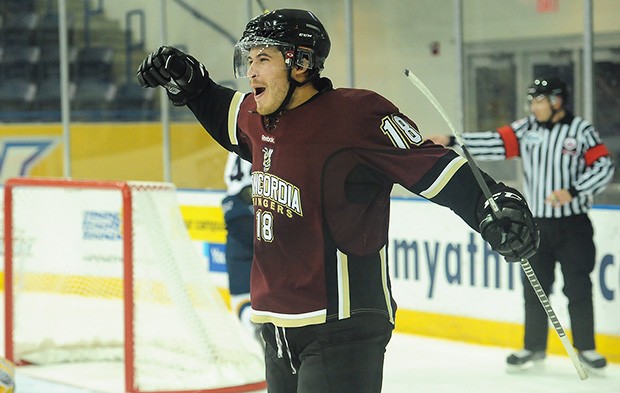 The mood was euphoric after the Stinger's first win against the Ryerson Rams. | Photo by Alex D’Addese

Steve Beisswanger, senior director of Communications and Public Affairs at the university, is also a big hockey fan. He joined the Concordia men’s hockey team on a weekend trip to Toronto for the first two games of the season.

Hockey bags, sticks, skate-sharpening and glove-drying machines, tools, tape, snacks — Stewart Wilson’s checklist seems endless as he makes the final preparations prior to closing the cargo-bay doors of the bus.

“Stewie,” as everyone affectionately calls him, is the Stingers' equipment manager. He has seen a lot of changes over his 24 years at Concordia. “I like what I see with this team already. There is a good chemistry within the group,” he says with a confident smile.

The bus rolling out of the Ed Meagher Arena parking lot at 5 p.m. on Thursday, October 8, is transporting more than the members of a hockey team and its hardware. It's also carrying the expectations of a new beginning for men’s hockey at Concordia.

Settling into his seat at the front of the bus for the long journey to Toronto, Marc-André Element, the interim head coach appointed in July, feels confident. “The guys had a great training camp. Everyone was focused,” he says. “I’m looking forward to seeing how we do on the ice. We want to have a strong start to our season.”

This year’s edition has a mix of returning players and some new faces. Of the 26 players on the official roster for the first game, 14 are first-year Stingers, including David Hunter. The 6’7” defenseman is, quite literally, a towering presence on the ice.

“His hockey sticks are so tall they do not fit in the team’s stick bag,” laments Wilson. Familiar names are back, including captain Olivier Hinse, Youseff Kabbaj, Dany Potvin, Alex MacDonald, Jessyko Bernard and Robin Billingham. 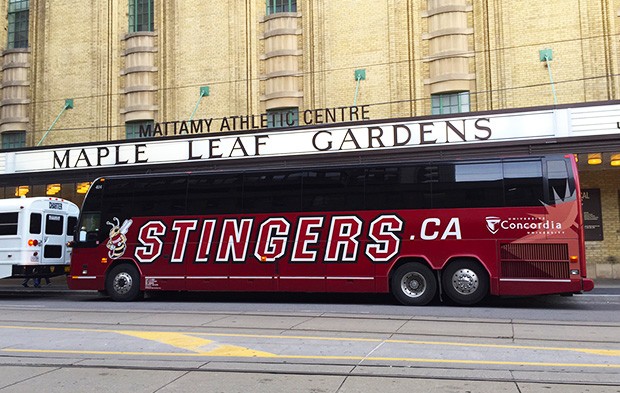 The Stingers are in town! | Photo by Steve Beisswanger

The atmosphere on the bus is energetic. Laughter, music and an Adam Sandler movie create a cacophonous symphony of sounds that will last the duration of the six-hour journey. The team arrives in Toronto just shy of midnight. In the lobby of the hotel, the coaching staff provides final instructions for the next day’s activities. One message is clear: Curfew is now!

Element has surrounded himself with an experienced team of assistants. Jesse Goodsell and Marc-André Rizk are, like Element, former Stingers who played at different times between 2005 and 2011. George Swan who played professional hockey in Great Britain complements the trio. Together they have painstakingly prepared the schedule for the two-game road trip. They pay attention to every detail that can help the players perform on the ice and in the classroom. Times for meals, rest, study and game preparation are carefully and strategically planned out.

Ryerson University’s Mattamy Athletic Centre is a spectacular facility with a legendary pedigree. For hockey junkies, the location is memorable for its previous vocation: it was the old Maple Leaf Gardens. Originally built in 1931, the building was the former home of one of the National Hockey League’s (NHL) Original Six. Following extensive work started in 2010, the landmark reopened in the summer of 2012 to house the recreation and athletics facilities for the university.

In the corridor outside the team's dressing room, the pre-game rituals are well underway. The mounting level of intensity is clearly visible in the faces of the players and coaches. Some players wear headphones to get into their bubble of concentration. Others are carefully taping their sticks or being “taped up” by student Karl Falardeau, the Stinger’s assigned athletic therapist.

At five minutes to game time, Element gathers all the players, coaches and support staff into the now-crowded dressing room. “This is it,” he says energetically. “We are a team and our journey starts tonight.”

Assistant coach Goodsell adds to the crescendo of positive energy and motivational fuel. "We are going to be known as a relentless team," he shouts.

"Yes!" the players answer in unison.

“Every shift, every battle, every backcheck, we are a team that never gives up.” The timing of the pre-game speech is strategic and clearly works. The players are now fired up just before jumping onto the ice. 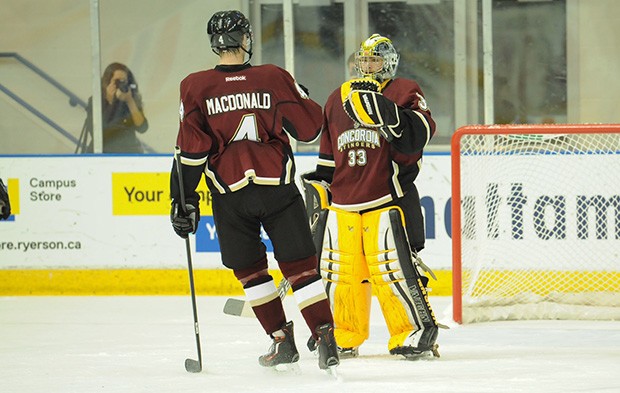 This high level of energy will be required. It’s Friday night and the game is also the home opener for the Ryerson Rams. A loud and enthusiastic home crowd can make a difference in a hockey game. Fans are given white towels emblazoned with the Rams’ logo to twirl in the air as their players are introduced. A band is set up in the upper level of the stands, to entertain but mostly to pump up the home crowd. The atmosphere is electric as the puck drops.

After a quiet first period, the Stingers strike midway through the second. Potvin scores Concordia’s first goal of the 2015-2016 campaign. A little over two minutes later, the Rams energize the fans with their first goal of the season. A spectacular highlight-reel goal by Philippe Hudon and an accurate shot by Bernard provide the Stingers with a two-goal lead going into the third.

Charles-Éric Légaré adds to the Stingers’ lead. However, three consecutive penalties in less than two minutes allow Ryerson to narrow the lead with a power-play goal. There is less than five minutes remaining on the clock.

The coaches’ pre-game directives are still fresh in the players’ minds. They are relentless and their efforts prevent the Rams from gaining any momentum in the dying moments of the game. Frédérick Roy seals the first victory for coach Element, scoring an empty-net goal with two seconds left on the clock. Stingers win 5 to 2.

In the changing room, the mood is predictably euphoric. On behalf of the players, Dany Potvin presents the game puck to their rookie coach. “This will be the first of many victories, I’m sure,” he says to the deafening cheers of the tired but ecstatic squad. The player of the game award, a fireman’s hard hat, is then presented to Miguel Sullivan, the rookie goalie and native of Nova Scotia who allowed the Stingers to maintain their lead throughout the game.

The second game is a Saturday-night matchup against the University of Toronto Varsity Blues. While the home rink of the Blues cannot claim to have housed an NHL team, the storied past of the arena is clear to see by the championship banners, dating back to the 1920’s, hanging from the rafters. Varsity Arena opened in 1926. 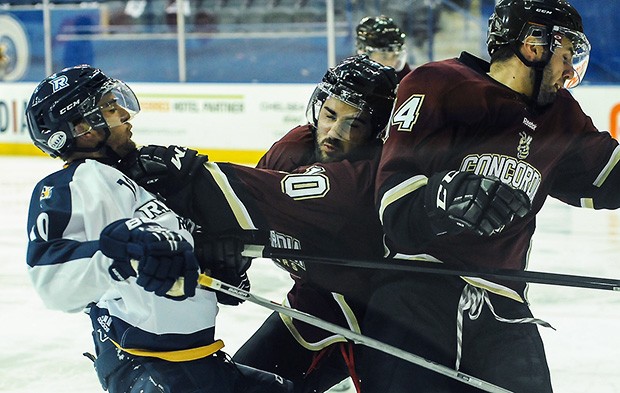 “We are going to be known as a relentless team.” | Photo by Alex D’Addese, Ryerson University

The team keeps its momentum from the previous game. Roy stings the Toronto squad early with a goal 43 seconds after the opening faceoff. The Blues respond with a goal midway through the period. Two first-year Stingers then combine on a picture-perfect goal when Alexandros Soumakis completes a precise pass from Luca Ciampini, giving Concordia a 2-1 lead at the end of the first. Unfortunately, that would be the extent of the Stingers’ goal scoring in the game.

The Blues come out strong when play resumes in the second frame. Two goals in the first two minutes provide Toronto with its first lead of the game. Aggressive play in the third period leads to multiple penalties on both sides. The Blues keep the upper hand by scoring another two goals in the early stages. An empty-net goal while the Stingers are on a three-man advantage capped a difficult second game for Element’s team. Varsity Blues 6-2.

The subdued atmosphere on the bus for the long drive back to Montreal contrasts with the energy felt and heard on the first leg of the trip. While most of the players are trying to sleep, coach Element is reviewing video footage of the game on his laptop.

When the quiet bus rolls back onto the Loyola Campus at 4 a.m. on Sunday morning, a different team climbs off than the one that left 60 hours earlier. “Starting the season on the road is beneficial,” says Element. “The time we all spend together makes this team more united and capable to deal with both success and adversity.”

The demanding schedule of a student athlete, in any varsity sport, requires a high level of dedication driven by pride and commitment. It's plainly visible inside the Stingers home dressing room in the early hours of the morning. Players are hanging up their equipment and talking about the days ahead. Sleep, therapy for minor injuries and homework are the main topics of conversation. In the background, Stewie is at the centre of another scene of controlled chaos. “We need to get things ready, we practise on Tuesday.”

Watch the Stingers face the University of Windsor Lancer during their home opener on Friday, October 16, at the Ed Meagher Arena (7200 Sherbrooke St. W.). The puck drops at 7:30 p.m.