On October 10, Concordians are taking part in a worldwide university programming marathon in the newly renovated Webster Library
|
By Meagan Boisse 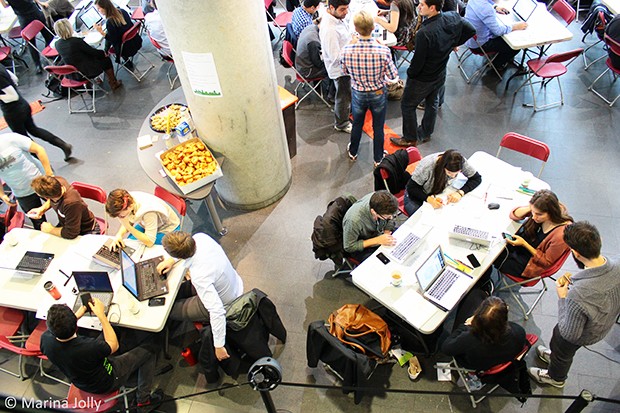 The October 10 event will be the first time Concordia University takes part in the worldwide Local Hack Day.

The October 10 event, taking place in the R. Howard Webster Library’s newly renovated facilities, represents the first time students from the university will participate in Local Hack Day. The worldwide competition invites groups to run hackathons simultaneously on different campuses across the globe, connecting with one another via live streams and chat rooms.

“Our students will be programming, and the projects they’re working on will be streamed live on MLH’s website for other students from around the world — who are doing the exact same thing at the exact same time — to see and comment on,” says Elias Haroun, vice-president of Projects for the SCS.

The venue for the hackathon is the Webster Library’s new multifunctional classroom, which boasts two large projectors, six collaboration screens, and flexible furniture that can be moved for different collaborative scenarios.

The SCS also rented out the amphitheatre on the ninth floor of the Henry F. Hall Building (H) for additional space.

Haroun says the free event is an opportunity to grow ideas and programming skills. “There are a lot of students who have a project in mind but don't know were to start. Hackathon is a good place to begin. You come, you form teams with people who are often more experienced than you, and they help you get your idea up and running.”

The student hacker community has been doubling in size every semester since 2013, according to MLH. Haroun has witnessed this boom firsthand, recalling how when he first began attending SCS events turnout was sometimes as low as five people.

“We get no less than 80 people participating at every event now, and it’s a mix of second- and third-year students, as well as a lot of freshmen coming from Computer Science, Software Engineering, Computer Engineering and Electrical Engineering; it really is open to anybody with a technical background or a desire to learn programming.”

For those who are still confused about what exactly happens at a hackathon, MLH describes it as an invention marathon in which people form teams around a problem or idea, and collaborate to come up with a solution from scratch. An example of an everyday application that came out of a hackathon is the Facebook “Like” button.

Students can register online for the Local Hack Day through the MLH website.

Stay updated on the latest hackathons by visiting HackConcordia or the SCS online.

Learn more about the various departments in Concordia's Faculty of Engineering and Computer Science.