Windmills, giants and the zombie apocalypse 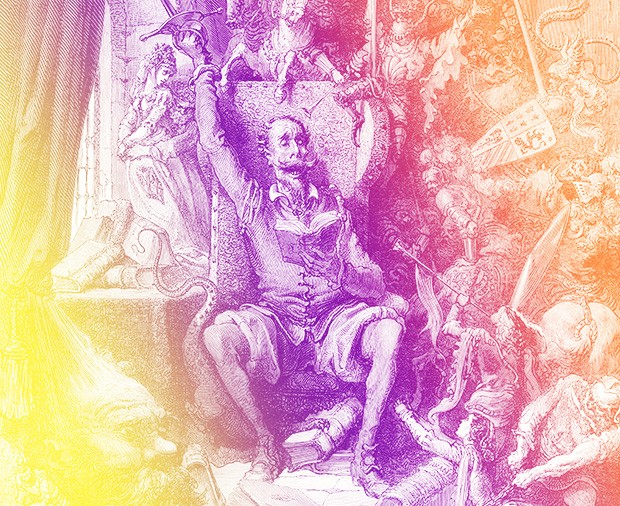 What can a book written over 400 years ago tell us about a world tuned into twerking, Twitter and Trump? Turns out, quite a lot.

Miguel de Cervantes’s magnum opus, Don Quixote, is often cited as the first modern European novel. His tale of knight errantry in a world that was losing its traditional anchors has inspired a wide array of books, operas, plays and movies since it was first published in 1605.

17th-century novelist, poet and playwright Cervantes is widely considered one of Western literature’s most influential voices.

On September 23, Concordia will host a public symposium on Cervantes and the public humanities in the 21st century. Spearheaded by Bradley Nelson, a professor in the Department of Classics, Modern Languages and Linguistics, the conference will bring together some of the most influential Cervantes scholars and cultural historians in North America to discuss the impact of Don Quixote in academia and broader society.

How exactly is Don Quixote relevant to us today? We spoke with one of the symposium’s guest speakers, David Castillo from the University at Buffalo, whose scholarly work draws critical analogies between postmodern horror genres such as zombie films and psychological thrillers and the early-modern European fascination with (un)natural curiosities and monsters.

David Castillo: The textual layering of the book allows for different world views that confront each other and result in multiple perspectives — something that was virtually unknown in Western literature before Cervantes.

In Don Quixote things are never one-dimensional. At first he is laughed at for thinking windmills are giants. As the novel continues, the reader’s perspective changes, as our own expectations, along with widely shared values and beliefs, are exposed as equally fanciful, if not outright ridiculous.

It is about testing assumptions we have of the world until we realize that our expectations literally colour our personal and communal reality. In a postmodern society such as ours, this makes a lot of sense, although it is also true that at a certain level we miss the “hard certainties” of the past as part of our craving for “authenticity.” This may be why we are currently witnessing a revival of fundamentalist attitudes in some religious and political circles.

What is the importance of this type of perspective?

DC: Much of Cervantes comes out of experimental engagement with the media of his time. Don Quixote is a parody of chivalry novels, but is also in constant dialogue with other types of literature of his era. Cervantes was concerned about mass culture and advocated for a critically responsive reader who would be resistant to media manipulation.

More than ever we are in need of this type of media literacy. It is hard to imagine how we can maintain democracy, even our humanity, without the ability to understand how media frames our reality, as iPhones, iPads, and computer screens become our virtual windows onto the world.

What about Cervantes in your own work?

DC: What I’m most interested in is precisely this issue of media framing in connection with not only Cervantes’s world but ours as well. Cervantes was deeply concerned about the effects of mass culture in general, especially visual culture — what we would refer to today as the culture of the spectacle, or simply pop culture.

In a way, I guess I am trying to follow this Cervantine lead in my own work as I look at our own popular culture in my research and teaching. Much of what I’ve been working on and writing about lately is about the framing power of mass-media and the popularity of pop culture icons like vampires and zombies, even if this may seem strange for a specialist of Golden Age Spanish literature. In this sense, I see my work as a cultural archeology of sorts.

For example, I have traced the roots of modern fantasy and horror literature to the culture of curiosities of the 16th and 17th centuries and to experimental literature by Cervantes, María de Zayas, and lesser-known writers of the 1500s and 1600s.

Zombies interest me because they have become an obsession of ours. Over the last few years, these films and fictions are everywhere. With respect to the figure of the zombie, my working theory is that we see in zombies what we fear we are becoming — mindless consumers driven by a hunger that we can’t understand. We know that our lifestyle is not sustainable, but we are seemingly unable to change course.

From My Cold Dead Hand: Cervantes and the Public Humanities in the Twenty-first Century will take place on September 23 in H – 767 (1455 de Maisonneuve). It is open to the public.