Should countries honour their climate debts?

This is the implication of a new study published in Nature Climate Change, in which Concordia University researcher Damon Matthews shows how national carbon and climate debts could be used to decide who should pay for the global costs of climate mitigation and damages.

The countries that have accumulated the largest carbon debts on account of higher than average per-capita carbon dioxide (CO2) emissions are the United States, Russia, Japan, Germany, Canada, the United Kingdom and Australia.

The U.S. alone carries 40 per cent of the cumulative world debt, while Canada carries about four per cent. On the other side, the carbon creditors — those whose share of CO2 emissions has been smaller than their share of world population — are India, Indonesia, Bangladesh, Pakistan, Nigeria, Brazil and China, with India holding 30 per cent of the total world credit.

“Thinking of climate change in terms of debts and credits for individual countries shows how much countries have over- or under-contributed to historical warming, relative to their proportion of the world’s population over time,” explains Matthews, study author and associate professor in Concordia’s Department of Geography, Planning and Environment.

“This paints a striking picture of the historical inequalities among countries with respect to their greenhouse gas emissions and consequent responsibility for climate changes.”

To estimate differences in national responsibility for historical climate changes, Matthews first calculated carbon debts and credits based on fossil fuel CO2 emission and population records since 1990. It was around this date that scientific knowledge and public understanding of the dangers of human-driven climate changes began to solidify.

Since that time, the total carbon debt across all debtor nations has increased to 250 billion tonnes of carbon dioxide. And it’s still going up: the increase in world carbon debt in 2013 alone was 13 billion tonnes, or about 35 per cent of global CO2 emissions in that year.

So what is the monetary value of this debt? “According to a recent U.S. government report, the current best estimate of the social cost of present-day CO2 emissions is about $40 USD per tonne of CO2,” says Matthews. “Multiply $40 by the 13 billion tonnes of carbon debt accrued in 2013, and you get $520 billion. This cost estimate gives us an indication of how much we could be paying to help lower-emitting countries cope with the costs of climate changes, or develop their economies along carbon-free pathways.”

Looking at the total world carbon debt, the numbers are even more staggering: the 250 billion tonnes of debt accumulated since 1990, at $40 per tonne, represents $10 trillion USD. “No matter how you look at this picture, these numbers are really big — much, much larger than even the most generous financial commitments currently pledged by countries to help with the cost of climate adaptation and damages in vulnerable countries.” 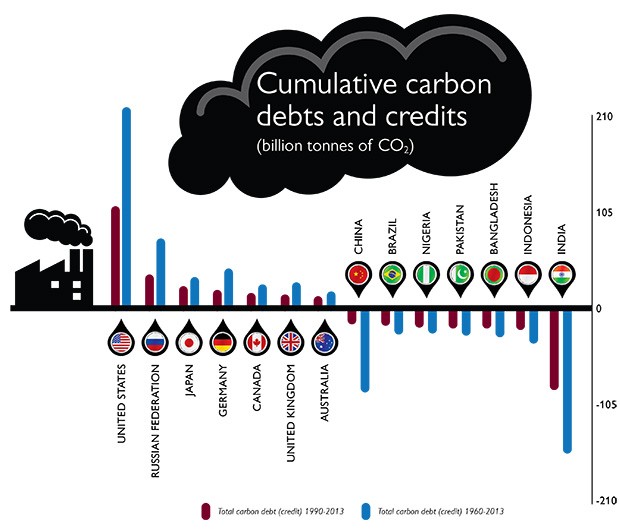 CO2 emissions vs. degrees of debt

Matthews also calculated how much each country has over- or under-contributed to temperature increases as a result of a range of different greenhouse gas emissions. By this measure, the total accumulated world climate debt comes to 0.1°C since 1990, close to a third of observed warming over this period of time. Again the U.S. is the single largest debtor, and India is the largest creditor. Some countries, however, like Brazil and Indonesia, switch from being carbon creditors, to being among the climate debtor countries, as a result of the additional greenhouse gas emissions produced by deforestation and agriculture.

“This idea of climate and carbon debts and credits highlight the large historical inequalities with respect to how much individual countries have contributed to climate warming,” says Matthews. “The historical debts and credits calculated here could be a helpful tool to inform policy discussions relating to historical responsibility and burden sharing, by providing a measure of who should pay — and how much they might be expected to pay — for the costs of mitigation and climate damages in countries with lower emissions.”

What does this mean for the upcoming Paris meetings?

As countries continue to announce their Intended Nationally Determined Contributions (or INDCs) leading up to December’s climate talks in Paris, it is becoming increasingly clear that these emissions pledges will not be enough to meet the international goal of limiting global warming to 2°C (see related research by Matthews’ research group published last month in Environmental Research Letters). The idea of additionally accounting for debts and credits would of course increase the burden placed on countries with high historical emissions. “But these historical inequalities are real and substantial, and need to be fully acknowledged,” says Matthews. “My hope is that this discussion will help lead to a stronger and more meaningful global climate agreement.”