Artifacts bear the image of the Sisters of Charity of Montreal's founder, Saint Marguerite d’Youville
|
By Tom Peacock 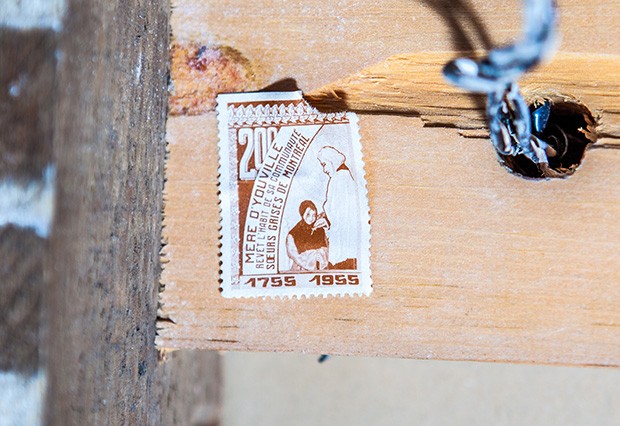 Workers repairing a wall in a room at the Grey Nuns Residence were surprised to find two stamps bearing an image of Marguerite d’Youville, dating from 1955, plastered on wooden beams hidden inside the drywall.

Andrew Clement, who was overseeing the construction project for Concordia’s Facilities Management, said his first instinct was to reach out and peel the stamps off the beams, where they had likely been pasted 60 years ago.

“But almost instantly, I stopped myself. I thought, ‘This is the Grey Nuns, it’s old, and there’s a lot of historical value here.’” 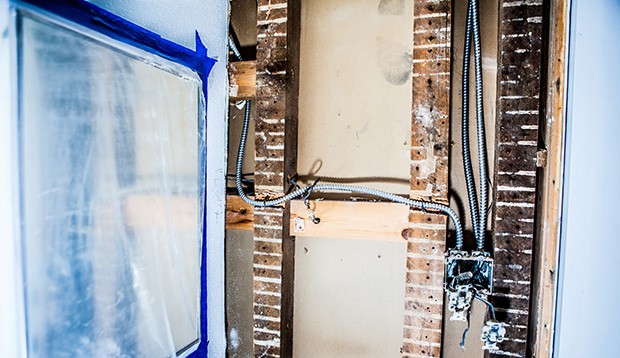 After taking some pictures, the work crew left the stamps where they were found and closed the wall back up. “These things have been in there for 60 years, and they’ll remain in there for another 60. We’ve got it documented, so we know where they are,” Clement says.

So why were these images of d’Youville placed in the walls? For protection, says Sister Nicole Fournier, congregational assistant and secretary for the Grey Nuns. “In the walls, sometimes we would find images placed there, an image of Marguerite d'Youville to protect against fires.”

Sister Faye Wylie, congregational treasurer and councillor, confirms that this common practice started after an important event in Marguerite d'Youville's life. "After one of the residences was damaged by fire she had said, we will not lose another one to fire."

Father P. Duchaussois' history The Grey Nuns in the Far North was published in 1919. In the book, he recalls the day when the Ville Marie Hospital, which was run by the sisters, burned to the ground on May 18, 1765.

"In a little while the whole building was consumed, and 118 persons were left without even a roof to shelter them. Amid the ruins, the pious Foundress said, 'My Children, let us kneel down and recite the Te Deum, to give thanks to God for sending us this cross.' When she rose to her feet, she said, as if inspired, 'Be of good heart, it will never burn again.' Her words have remained true till the present hour."

The stamps aren’t the only images of d’Youville hidden around the Grey Nuns Residence. Clement, who has been involved in a lot of the renovation work over the past few years, has come across several others himself. “I’ve been in a lot of places where others haven’t been … There are pictures of Marguerite d'Youville up in the rafters and in the basement, tacked onto beams.” 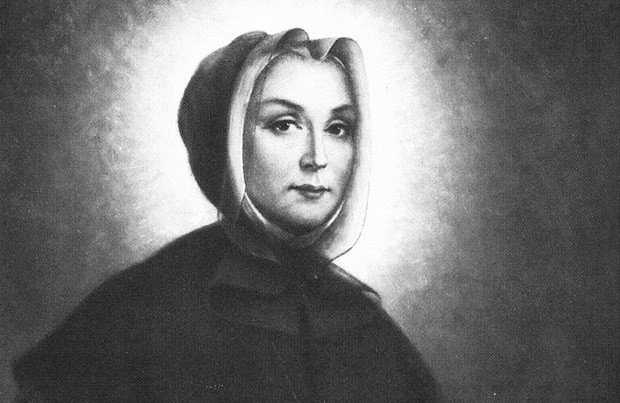 Fournier says that when the order undertook previous renovations they also found small rolls of paper with prayers written on them hidden in various places. What surprised her, however, was that someone would hide historically significant stamps in the walls, ensuring they wouldn’t be found for a long time.

The stamps were issued on the 200th anniversary of the canonical approbation of the Grey Nuns in 1755 by Monseigneur de Pontbriand, Bishop of Quebec — essentially recognizing the order’s right to pursue its spiritual and charitable mission.

Fournier also points out that 1755 was the same year the Sisters began wearing their signature grey-beige habit with black gauze coif, black cape, veil and cincture. “It was the same traditional habit that would endure until 1968 with very few changes,” Fournier says.

D’Youville died in 1771 at the age of 70. She was beatified in 1959, and in 1990, Pope John Paul II canonized the Grey Nuns founder. Originally entombed in a crypt beneath the Grey Nuns mother house, her remains were relocated to her birthplace in Varennes, Quebec, in 2010.

Learn more about the history of the Grey Nuns Residence.