From Great Bear Lake to Hiroshima, a Concordia academic explores the Highway of the Atom's troubled legacy
|
By Peter C. van Wyck

"For many in the north, the Highway of the Atom pertains to a history that is very much alive in the present," writes Concordia Communications Studies professor Peter C. van Wyck.

"If one is prepared to follow this route, it tells a story, or stories – fragile, marginal, unasked, and unheard – about history and memory, landscape and trauma, and ethics."

As Hiroshima marks 70 years since the atomic bomb, here is an edited excerpt from van Wyck's "Northern War Stories: The Dene, the Archive, and Canada’s Atomic Modernity," an essay originally published in Bearing Witness: Perspectives on War and Peace from the Arts and Humanities.

On the far eastern shore, where no one lives today, just below where the tree-line cuts across the immense glacial body of the lake, carved into barely fathomable depths sometime in the late Pleistocene, at the far end of what is now called McTavish Arm, buttressed in ancient granites by the very western edge of the Precambrian Shield, lies Port Radium.

This land, home to the Sahtú Dene for some number of millennia, is also a site of considerable significance to Canada’s atomic history. A point of origin, one might say, where a frontier economy with its currency of fur, shifted awkwardly toward the very contemporary projects of an atomic modernity.

From here, on Great Bear Lake, uranium ore was transported south by river and rail, leaking as it went, for processing at Port Hope, and then into the productive centers of World War II – the Manhattan Project as it is conventionally known – subsequently extending itself over the clear morning skies of Hiroshima and Nagasaki, and back again into the Dene community at Déline in the form of cancers, stories, addictions, and depression. This is a very long and complex route, in part material, topographic, narrative, archival and memorial. It has come to be called the Highway of the Atom. 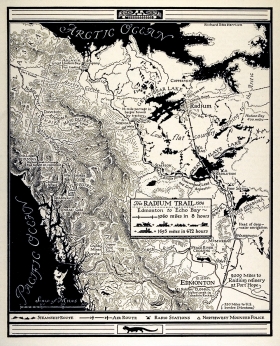 For many in the north, the Highway of the Atom pertains to a history that is very much alive in the present. If one is prepared to follow this route, it tells a story, or stories – fragile, marginal, unasked, and unheard – about history and memory, landscape and trauma, and ethics. But also, and significantly, it tells us about Canada’s silence on topics pertaining to its wartime activities.

It tells us of a piece of marginal history, at the dawn of the Second World War, where a wilderness outpost became a nexus of connections and flows linking the pre-modern routes, practices and peoples of the fur trade and the atomic modernity in which, quite suddenly, Canada found itself.

It tells us also about a profoundly occluded vision available to those of us at a distance from all of this. And indeed this impaired vision supports and ratifies the very idea that “we” are at a distance, to begin with.

For the southern researcher it poses important challenges – philosophical, archival, methodological – for thinking through some of the warring atlas of calamity that was the 20th century.

About the time I was beginning to think about all of this, I saw a documentary film by the Canadian filmmaker, Peter Blow. His film, The Village of Widows, which aired on the Canadian cable channel Vision TV, was exactly the history I was thinking about; only it was told from the point of view of the Sahtú Dene of Great Bear Lake.

Made from contemporary video shot on location by Blow and his crew, extensive archival footage, photographs, newsreels – he did a lot of research – Village of Widows is a harrowing tale about which, at the time, almost no one south of Yellowknife knew anything. So he told the story.

Village of Widows relates the experience of the Dene, who have resided in the region for three or four thousand years – or forever, if you ask them – and their involvement over a (comparatively brief) period of 30 years with the development of these exceedingly modern staples on their land.

They were deeply involved, as Blow’s film demonstrates, in the handling and transport of radioactive pitchblende ores from the mine-site on Great Bear Lake.

With testimony from Elders and other community members, Blow’s film reveals an unknown narrative concealed within a story itself largely unknown.

The Dene had also been involved at and around the mine site in various support roles – from providing moose, caribou and fish for the mine’s kitchen, firewood and building timbers, beading, crafts and clothing, and other miscellaneous jobs. Several Dene men were employed as river boat pilots on the Great Bear River.

The Government of Canadian has concluded there had not been any Dene miners. I’m not so sure. The answer to this probably remains to be unearthed in the archives.

For the Dene, as it appears to me at a distance, the film was instrumental in a process of completely resignifing the preceding half century. It is not that the pieces started to fall into place; it was just pieces. Falling. An imperceptible tide of suspicion washed over the past.

In a stroke, lives lived in and around the mine, on the river and the portage, on the lake, were transformed into something quite different. The health and abundance of fish and game, the unimaginably vast lake, the land, upon which everything depends, all this was thrown into question.

Domestic life, the very intimacy of the home, the oikos, was also retroactively contaminated. Families began to recall that they had been living with radioactive ore dust, ore bags repurposed for domestic and sanitary uses, contaminated building materials scavenged and used elsewhere, and that standards of hygiene appropriate to hazardous radioactive materials and gasses (radon) were not enforced, much less taught or recommended.

Details gathered new and grave significance. Dust and dirt became “tailings.” Hands not washed became precautions not taken. Caribou and fish freighted with risk. Even, and perhaps particularly, the deaths of those who had already passed were no longer secure. Symbolic death denied to the dead.

In this way, the past, their past, was itself rendered toxic via a retroactive catastrophe of knowledge; a traumatic reversal toward events not experienced as traumatic in the first place. In any case, as a result of this labor, the Dene contend that they have suffered the loss of many of their kin, men mostly, and children.

As it turned out, and quite unbeknownst to them, not only had the radium and uranium mined from their land contaminated an unknown extent of their waters and lands, animals and peoples, but the uranium had come to be used in the development of the bomb, and in the massacre of Japanese civilians – as we and the Dene were told – to save lives, and end a war in which the Dene at least had had no hand.

This was a revelation. Nearly a generation had passed. The miners: gone. Boats and barges beached and sold. It was about the middle of the 1980s that the Dene became officially – that is, publicly – aware of the nature of their historical activities; until then, it hadn’t really been a question.

That is, their collective history project did not register the fact of the Highway, its purpose, and the threat posed by its material, memorial, and symbolic legacy. Contamination. The absolute invisibility of radiation. From Port Radium to Déline, down the river to Tulita, then up the Mackenzie and into Southern Canada, and well beyond. The rocks from their land, the cancers in their community: these things had not relayed into correct concepts. Not until then.

By the mid-1990s, the Dene had become well informed about the connections between the mine, the war, their labour and the health of their community. The reaction was complex. Certainly it politicized the community around questions of health and radiological contamination.

Their task was to write the history of their exclusion, using the very documents that excluded them. Nonetheless, what they were able to show was that they were in fact there; that they had worked for Eldorado in a number of capacities; that the Government was fully aware of the danger posed in the mining, handling, and processing of pitchblende ores; and that they had never been told any of this.

As it appears to me, in the wake of these realizations the Dene came to interpret their role in a most complex manner; as both accomplice and victim. As both agent of war, and subject to it; in both cases unwittingly.

In August 1998, to coincide with the 53rd anniversary commemorative events of August 6, a delegation of 10 Dene went to Japan, to Hiroshima. They went to the end of the circuit to convey their apologies for having been involved, and to acknowledge their responsibility.

What had not been registered as traumatic by the Dene in the first instance – or at least no more or less traumatic than any other of their historical and ongoing contacts with Europeans and southerners – was in a way even less so in the second. This was the punctum that drove me to this work.

It leads me to ask how it is that one comes to assume responsibility for that over which one has no control. How? How in the midst of recognizing their own disaster, did they attend to the Japanese survivors?

Struggle though I have, I cannot answer this question.

The award-winning Concordia academic also explored this little-known facet of Canadian history in his book The Highway of the Atom (McGill-Queen’s University Press, 2010).

Find out more about Communications Studies at Concordia.