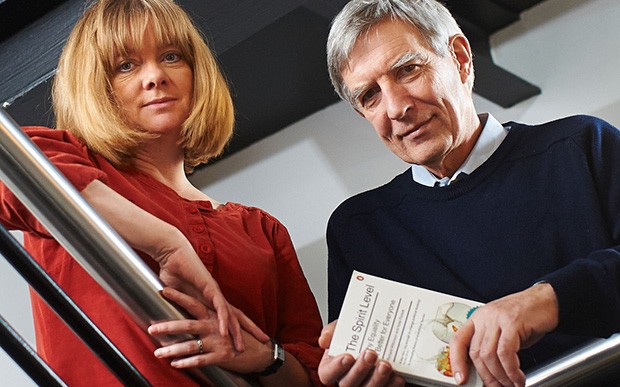 Kate Pickett and Richard Wilkinson, co-authors of The Spirit Level: Why Equality is Better for Everyone, will engage in a public conversation at Concordia on June 26.

The findings are clear: in societies with less income disparity between classes, children are healthier and social problems are less severe. On June 26, two leading British researchers are coming to Concordia to explain this correlation and discuss its profound implications.

Richard Wilkinson and Kate Pickett, are co-authors of the 2009 book The Spirit Level: Why Equality is Better for Everyone. The two will engage in a public conversation moderated by Jennifer McGrath, director of Concordia's Pediatric Public Health Psychology (PPHP) Lab and an associate professor of psychology.

Their talk is the only event that will be open to the public over the course of a three-day meeting of the International Network for Research on Inequalities in Child Health (INRICH) on Concordia's Loyola Campus.

In many western countries, the income discrepancy between those at the top of the ladder and those at the bottom has steadily widened since the early 1980s, to the point where it's now become a hot political topic. Barack Obama recently called the income gap "the defining issue of our time."

Experts say inequality, or even just the perception of it, is consistent with child health problems and social ills ranging from teen pregnancy to drug abuse and obesity. Wilkinson explains that the material differences between us are directly related to our own and others' perception of our status in the social hierarchy.

"Social status differences become more important in societies with bigger income differences," he adds. "When some people are hugely important and others are seen as almost worthless, we all worry more about how we are seen and judged by others.”

Wilkinson contends that this worry is a powerful generator of chronic stress, which in turn can make people sick and fuel damaging behaviour. As an example, he points to a scenario of teenagers going out to a party, concerned that they don't have the most fashionable, hippest clothes. Maybe they’ll have a few drinks and take drugs, he suggests. “So they can relax with other people.”

He insists there's a huge amount of research confirming how social problems among youth increase with the income gap. For instance, he points out, “There's more bullying among schoolchildren in more unequal societies.”

In early August 2011, rioting broke out in several London neighbourhoods after a Tottenham man, Mark Duggan, was shot dead by police. Wilkinson says that once the looting began, kids from the poorer parts of London stole status goods: things like the latest phones, or clothes with the right designer labels.

“They hear endlessly about how important those things are to self-respect." he says, adding that, in general, "violence is more common in more-unequal societies, because violence is triggered by people being disrespected and looked down on."

Moderator Jennifer McGrath, herself an INRICH member, is also involved with EPOCH, an international study measuring the effects of poverty and income inequality in eight jurisdictions, including Quebec.

Recently, research undertaken in some Montreal neighbourhoods by the Concordia PPHP Lab has found that people living in poorer sectors, or ones that they perceive as poor, don't sleep as well.

The question of perceived inequality," says McGrath, is "compelling as well as controversial. We use a picture of a ladder and ask kids 'where do you think you fit on the ladder of status?' That is predictive of all sorts of health outcomes; even with adults. It's more predictive even than their actual socio-economic status. It's fascinating."

Richard Wilkinson and Kate Pickett will be discussing their work and related topics on Friday, June 26, at the Oscar Peterson Concert Hall, on Concordia’s Loyola Campus (7141 Sherbrooke St. West).

The event, scheduled for 2:30 to 5:30 p.m., includes a book signing and a question-and-answer session. It is open to the public free of charge, but registration is required.