This month, 200 experts congregated at Concordia to discuss answers to Quebec's most enduring problems
|
By Tracey Lindeman 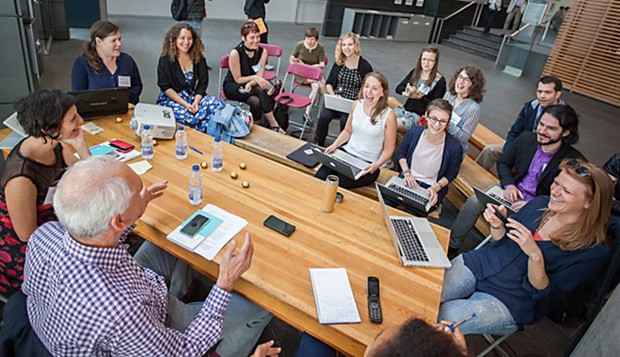 More than ever, universities are working to integrate themselves into communities. | Image courtesy of Projektae

Before the term “social innovation” was devised, there were things like universal health care, public pension plans, welfare, subsidized daycare, employment insurance — even hospitals and universities.

“These were all the social innovations of their day,” says Michel Venne, the board president of the Réseau québécois en innovation sociale (RQIS).

But what, exactly, is a "social innovation" anyway?

According to Venne and the RQIS, a social innovation is a new idea, approach or surgery, a new service, a new product or law, a new type of organization which responds more adequately and is more sustainable than existing solutions to a defined social need.”

The RQIS is a network founded in 2010 that encourages anyone who is part of the fabric of life in Quebec — be they members of the public or members of the National Assembly — to come together to work on projects that aim to improve the lives of Quebecers. Currently, the not-for-profit organization claims to have approximately 30 members, including a number of institutions.

On June 4 the group held its Rendezvous de l’innovation sociale at Concordia, which Venne says was attended by roughly 200 participants, among them social entrepreneurs, researchers, institutional leaders and representatives of various community organizations.

Over the course of the day delegates listened to talks, participated in workshops, evaluated a case study and discussed the importance of measuring and benchmarking the impact of social innovations.

“We were hoping for a diversity of participants and that's what we got," says Venne. "One of the goals of the RQIS is to gather and link all these people we consider social innovators together. But because they don’t necessarily use that word or expression to describe what they're doing, they sometimes don't even realize that's what they are."

The mandate: collaboration is key

Some players within the RQIS are trying to transform huge systems like health care and education from the outside, attempting to drag what they consider outdated institutions and bureaucracies — many of them early social innovations themselves — through major change.

The RQIS points to the fact that universities are, now more than ever, working to further integrate themselves into communities and sectors by offering services outside of any one particular curriculum.

“This is just one more area where Concordia is working to be innovative and engaged," says Graham Carr, Concordia’s VP of Research and Graduate Studies. "Whether in a rural town or the heart of the city, engagement matters."

Social innovation may be picking up steam elsewhere in Canada and the world, but as Carr points out, Quebec was an early-adopter society. “This gives us a legacy to build from.”

According to Venne, collaboration is key to having the most impact. Tech entrepreneurs need to collaborate with social innovators. Specialists and experts need to work together with citizens. Decision-makers need to work with everyone else until systems are designed to benefit the most number of people in the most equitable way.

“All those kinds of challenges need new ways to work together, new behaviours… and all those new things are social innovations.”