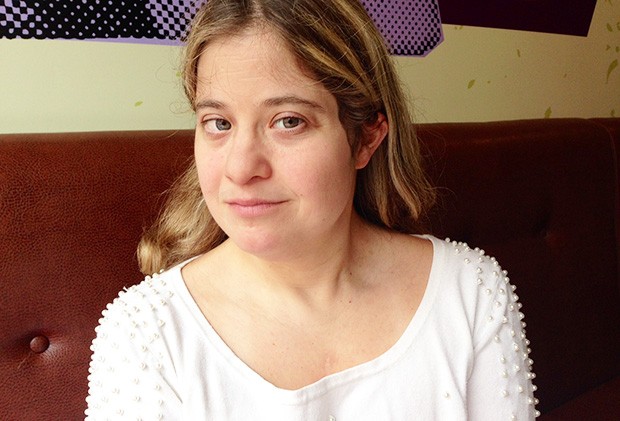 Stephanie Boghen: “I'm lucky because I've got people who always want to lift me up.”

She's both an ebullient theatre student and a competitive, gold medal-winning bowler who recently received a standing ovation from a room full of dignitaries at the United Nations.

Stephanie Boghen lives her life out loud and to the max — an enviable accomplishment for anyone. That she has Down Syndrome is beside the point. “I’ve already done so much in my life, it makes me feel like anything is possible,” she says.

Speaking at the UN last March on World Down Syndrome Day, the 38-year-old Boghen explained how living with a disability has influenced and impacted her decisions in life, noting that she never thought she would go to university — that, at one time, even the mere thought of it was overwhelming.

“It’s hard to have friends at university, to fit in. I’ve always been the different one,” she says.

But her tutor, Mariella Castillo, strongly encouraged Boghen to at least consider it, and two years ago Boghen decided to enrol at Concordia as an independent student. She’s since taken five courses and is hoping to return next year as a theatre major — an artistic discipline not entirely unfamiliar to her.

She recalls performing in her first play at age five while attending Summit School, a Montreal-area institution for children with special needs. The play was Goldilocks and the Three Bears and she had the starring role.

Although Boghen considers herself highly creative, after grade school her theatre aspirations lay dormant until just a few years ago when she began taking art and drama therapy courses at the Centre for the Arts in Human Development.

In 2012, she performed in Our World: A Musical Ethnodrama, a play put on by the Centre that explored the actors’ cultural backgrounds. Given Boghen is Jewish and the play coincided with the high holiday of Purim, she decided to run with it. “I was putting all that Jewish holiday right on to the stage,” she recalls with a laugh.

While Boghen has an outgoing and magnetic personality, it has taken her an entire lifetime to start feeling comfortable in her own skin. “I didn't want to have Down Syndrome,” she says, reflecting on her childhood. "My parents worked hard to make me feel normal when I was growing up — like a regular person — but I always felt different around other kids. I never had a social life.”  Although, she’s quick to add, she has many friends now.

The struggle for independence

In spite of her relative bravado, Boghen's acceptance of being born with Down Syndrome is still very much a work in progress. She says she notices when and how people look at her when she's in the metro, their eyes silently judging, measuring her for differences. She admits she could do better to fully embrace her disability. “But I think I’ll get there.”

Many people with disabilities often have a hard time gaining their independence and Boghen’s experience is no exception. She doesn’t know if she’ll ever be able to live alone or with a roommate or significant other, although she’d like to try it one day. She acknowledges that her struggle to carve out a life of her own has been “a little bit tough.”

"It’s complicated," Boghen says. "There’s the desire for independence, and then the fear of independence and the mistakes and missteps that come along with it. But if I fall, I fall. Except I'm lucky because I've got people who won't let that happen; who always want to lift me up.”

Ultimately, Boghen is acutely and impressively self-aware. She knows who she is — a daddy’s girl who depends a lot on her mother; a tomboy in nice clothing; an impressionable young woman who falls in love perhaps a little too easily; a lover of Hollywood and travelling and strawberry shortcake. She likes almost everyone she meets and has a hard time saying goodbye.

“I hate goodbyes. I always want to say hello.”