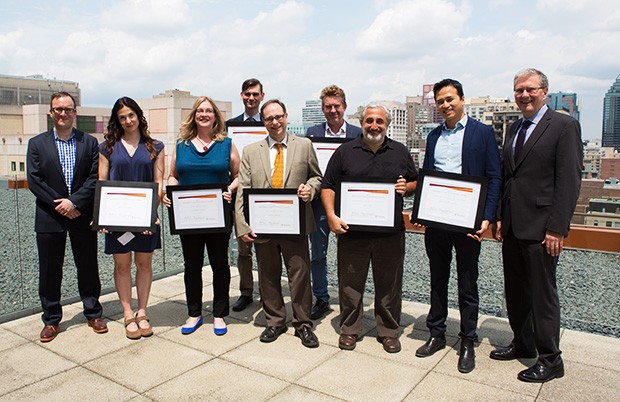 2014-15 was a banner year for Concordia’s presence in mainstream media. Fully 85 per cent of Canadian media mentions of the university involved experts commenting on subjects in the news, and researchers sharing their latest discoveries. It’s the kind of stellar media profile universities aspire to.

The collaboration of Concordians who were featured in news stories this past year was recognized on June 5 at the third annual President’s Media Outreach Awards celebration. The gathering drew several dozen faculty and staff members who had been designated as Newsmakers of the Week this past year due to the broad reach of news stories featuring their work or expertise.

Chief Communications Officer Philippe Beauregard mentioned a recent encounter that highlights the emphasis funding agencies now place on media presence as a measure of how researchers are working to disseminate their knowledge more widely. Beauregard spoke of a senior official at a granting agency who praised the willingness of Concordia researchers to discuss their work with journalists.

President Alan Shepard expressed his appreciation for faculty and staff sharing their expertise and discussing their work to help establish a media presence that bolsters the university’s reputation across Canada and around the globe.

This year’s winners in the six award categories are:

A new award was inaugurated this year to recognize the top authors of opinion pieces published in newspapers. The award for Opinion Writer of the Year underlines the high success rate of 80 per cent that Concordians enjoy in actually getting their submissions into print. Last year, Concordians were responsible for 61 op-ed pieces being published in various newspapers across Canada and the United States.

The inaugural Opinion Writer of the Year award went to Kathleen O’Grady, a research associate at the Simone de Beauvoir Institute. O’Grady writes about health-care issues as well as her experiences as the parent of an autistic child. Her opinion pieces have been picked up by a range of newspapers across Canada and the U.S. Her writing is also frequently reprinted in other newspapers following their initial publication.

The award recognizing top media coverage internationally went to two researchers this year whose work garnered significant media attention in a number of countries. Jean-Philippe Gouin, assistant professor in the Department of Psychology, and Gad Saad, professor in the Department of Marketing, were the recipients of the award for Research Communicator of the Year (International). Both were the subject of not one but two news releases highlighting their recent findings.

Gouin’s research deals with key societal issues — how social isolation can lead to physical problems and also how to predict who will suffer the most from stress. His research received coverage from Paris to Johannesburg and many cities in between. At the ceremony, Gouin's colleague and fellow Newsmaker Thien Thanh Dang-Vu (pictured above) accepted his award.

Saad’s research findings relate to how creativity is tied to culture and also how people select their mates. Saad’s research was a media favourite from London to Beijing. His work was also profiled in The New York Times and Time magazine.

In the Canadian media, coverage of Zach Patterson’s research earned him the award for Research Communicator of the Year (Canada). Patterson — an associate professor in the Department of Geography, Planning and Environment and Canada Research Chair in Transportation and Land-Use Linkages for Regional Sustainability — provided interesting new information about migration patterns in major cities. Countless English and French broadcast and print media outlets picked up a research news release about his work revealing that seniors are moving to the suburbs right across Canada.

The significant research work of graduate students is recognized through the award for Graduate Communicator of the Year. This year the award went to Erin O’Loughlin, researcher with Concordia’s Individualized Program (INDI) and a doctoral candidate in the Department of Exercise Science. O’Loughlin’s research linking binge drinking among adolescents and the likelihood of problem drinking in adult life got widespread coverage in print and broadcast media across Canada, including prominent placement in the National Post.

The Expert Commentator of the Year is Patrick Leroux, associate professor in the Department of English and the Département d’études françaises and founding director of the Montreal Working Group on Cirque/Circus. Leroux withstood the international media tsunami that surrounded the sale of the Cirque du Soleil.

The New York Times and media from around the world sought out Leroux for a deeper understanding of the significance of the sale. Leroux also inaugurated new studio facilities at University Communications Services by doing the first live interview linking with CNN’s New York studio.

The award for Communications Ambassador of the Year is presented in recognition of media work by a member of the Concordia community. This year the winner is Kyle Matthews, senior deputy director and lead researcher for the Montreal Institute for Genocide and Human Rights Studies (MIGS).

In addition to being a recognized opinion leader on Twitter, Matthews also regularly provided perspective on a number of news stories relating to human rights abuses around the world. The rise of groups such as ISIS and Boko Haram, the radicalization of Canadian youth, the anniversary of the Armenian Genocide and the crisis in Syria all figure on the long list of subjects Matthews has addressed.

Read more about Concordia’s Newsmakers of the Week.