On May 7, Concordia plays host to the Eastern Regional 3MT Thesis Competition
|
By Christian Durand 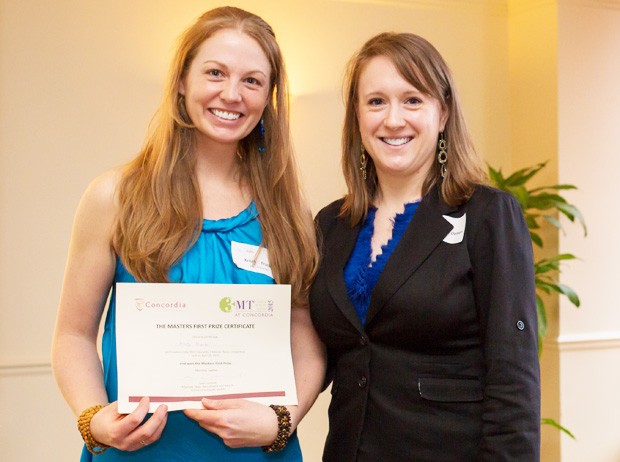 Kristy Franks (left), a graduate student in the Individualized Program, won the Concordia 3MT competition on April 10 and will represent Concordia at the regional finals.

On Thursday, May 7, Concordia will become an epicentre for communicating the latest advances in graduate research, in three minutes or less.

Academics from universities across Quebec and the Atlantic provinces are descending on the university to pitch their research to the public during the Eastern Regional 3 Minute Thesis (3MT) Competition.

The 3MT was developed at the University of Queensland, Australia, in 2008 and has since gone international.

“What makes this event so interesting is that students are challenged to present their work in a way that everyone can understand,” says Paula Wood-Adams, dean of Graduate Studies. “Whether it’s engineering, business or social sciences the competition is a chance for the public to learn about research in a fun and dynamic way.”

To make things even more exciting, Concordia has a rooting interest in this year's event. Kristy Franks, a graduate student in the Individualized Program (INDI), won the university's 3MT competition on April 10. and will be presenting at the regional finals.

Her research examines the values and ethics that drive human thought and decision-making related to water. Franks has found that this relationship can be based on many factors, including utility, but sometimes even respect and reverence.

“There is a general acknowledgement in Canada that our dominant water world view stems from a human-centric perspective — in which we take and water gives,” she says. “This one-way relationship is ultimately unsustainable and destructive, and we need a wider perspective so as to ensure that water remains healthy and accessible for future generations and for other species.”

To examine the alternatives, Franks took part in a 10-day canoe trip with Cree youth in the eastern James Bay region of northern Quebec.

What she discovered was a holistic view of water that recognizes interdependent relationships — from past and future generations, as well as non-human life forms and life-supporting systems.

Franks hopes that a better-informed understanding of such values and ethics can help guide water governance, and eventually position Canada as a champion in defining frameworks for global water cooperation and partnerships.

Franks decided to take part in the Concordia 3MT competition because she wanted to practice her public speaking skills, and learn to express her research in succinct and relatable ways.

She says coaching sessions offered by GradProSkills were particularly helpful in the lead-up to the competition. “The coaches really helped us to choose appropriate vocabulary and tone, and recognize which parts of our research to emphasize.”

Representing Concordia at a regional competition is exciting, but Franks says what she’s really looking forward to is seeing all the presentations.

“In academia, we can at times be trapped inside our own research bubbles. This is a really great chance to hear about unique research in other fields.”

Cheer on Kristy Franks and other 3MT participants from across Quebec and the Maritimes at the Eastern Regional 3 Minute Thesis (3MT) Competition — on May 7 from 4:30 to 7:30 p.m. in Room MB-2.130 of the John Molson School of Business Building (1450 Guy St.) on the Sir George Williams Campus.

Kristy Franks was also one of the Top 25 finalists in SSHRC's 2015 Storytellers challenge: