Stuart Thiel, part-time instructor in the Faculty of Engineering and Computer Science, reflects on life as a second-generation Concordian
|
By Tom Peacock 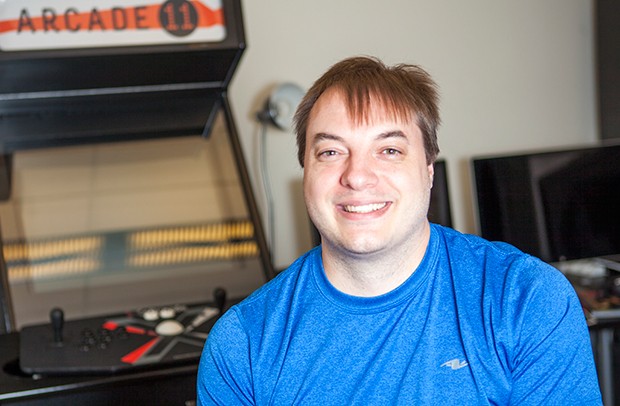 There are two constants in the story of part-time instructor Stuart Thiel: Concordia and computers.

Throughout his childhood, Thiel would visit the university’s downtown campus with his father, Larry, who ran what’s now known as Academic Information Technology Services (AITS) for the Faculty of Engineering and Computer Sciences (ENCS).

“My dad made sure I knew how to use a computer,” he says. “When I was five, I used to help the secretaries in the Hall Building with DOS.”

Thirty years later, after completing both his bachelor’s and master’s degrees in computer science at the university, and running his own private business, Thiel is more closely connected than ever to Concordia.

He also works as the coordinator for the Fine Arts Research Facilities Graduate Game Lab. Thiel says he applied for the job shortly after discovering the lively space where video-game researchers and developers congregate on the 11th floor of the Engineering, Computer Science and Visual Arts Integrated Complex (EV Building).

“I love this room to pieces,” he says, adding that the latitude afforded by the position is important, since he’s also working on his PhD in computer science. His thesis project is an examination of existing sorting algorithms, under the supervision of Greg Butler from the Research Laboratory for Bioinformatics Technology.

Thiel decided to tackle the subject after he was asked to teach an intensive summer class for the ECE on data structure and algorithms. “The last time I had seen the material was when I was an undergrad. So I crammed and crammed, and it sparked my interest like my interest had not been sparked in a very long time,” he says.

Two years into his research, Thiel thinks he’s found ways to improve upon some of the most common sorting algorithms. “It’s a really, really fundamental technology that not a lot of people have thought about since the 1970s,” he says.

However fundamental, the problems Thiel is wrestling with in his graduate work are complex. He welcomes the opportunity to get back to basics during his undergraduate lectures in web programming and software engineering. “If I teach it from my perspective of knowing it, they're going to be really confused. It won't make sense, because you skip over stuff. So you have to continually remember how to explain the basics and how to understand why you know it yourself. That's good for me, too, and I really enjoy that.”

Listening to Thiel talk a mile a minute about his life as a student, lab coordinator and part-time lecturer at Concordia, it’s apparent that he harbours a great deal of enthusiasm for technology, high-level problem solving and helping others learn.

Trying to get his students to feel the same way he does is the primary motivation behind his teaching practice, he says.

“I like talking about ideas and getting people excited about them. It’s fun to see students learn something and realize that it’s not all about getting a job or getting a piece of paper. It’s about getting better. And that’s super neat.”

Learn more of Concordia’s part-time faculty members in the Faculty of Engineering and Computer Science.