Can educators capture the ‘idea on the corner of the desk’?

This month, at Concordia’s Teaching and Learning Festival, surgeon Jonathan White explains what Muppets have to do with hard science
|
By Sara DuBreuil 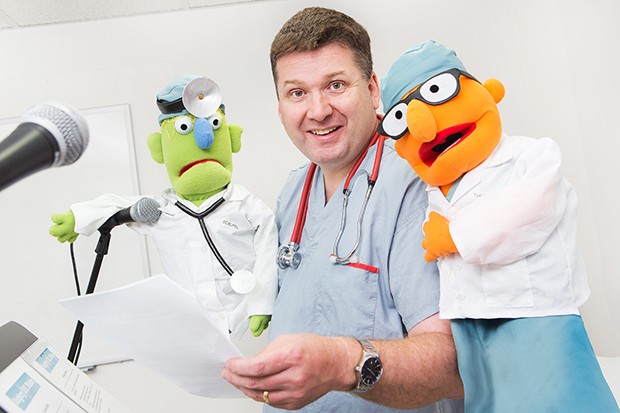 Jonathan White: “I’m a surgeon, but I find myself teaching using Lego, Muppets, zombies and all sorts of weird things.” | Photo by Curtis Comeau for the Faculty of Medicine and Dentistry, University of Alberta.

Jonathan White always keeps a ukulele, two medically themed Muppets — Dr. Scalpel and Thumbs, a resident — and a pile of Lego on hand in his office. For most professors of surgery, these would be distractions; to White, they’re all part of being an educator.

On January 23, White is delivering the keynote address at Concordia’s third annual Teaching and Learning Festival. In “Surgery 101: Finding Fun and Creativity in the Teaching of Surgery,” he will focus on how to apply new and unexpected techniques to serious university subjects.

“I’m a surgeon, but I find myself teaching using Lego, Muppets, zombies and all sorts of weird things like that,” says White, an associate professor in the Department of Surgery at the University of Alberta.

“I want to try to explain to people how that came about. It’s not as weird as it looks — it’s quite deliberate in terms of trying to work narrative into teaching, and trying to get people to remember things through stories.”

White has won numerous awards for his innovation and leadership in education. Most recently, he became the first surgeon to be selected for a 3M National Teaching Fellowship, an award that recognizes exceptional work at Canadian universities.

This multifaceted, interactive approach is a perfect fit for White: accessibility — on all levels — is key to his professional ethos.

In 2008, he launched Surgery 101, a series of podcasts about basic surgery subjects. Its beginnings were modest: 10 episodes uploaded to iTunes. To date, the podcast has been downloaded 1.7 million times in some 180 countries. Surgery 101 has also expanded to video, which is where Dr. Scalpel and Thumbs, the Lego and the zombies come in.

The series also aims to break down stereotypes about surgeons — stereotypes White believes are perpetuated on TV by medical dramas like Grey’s Anatomy.

White, a self-described techno-geek, is particularly keen to tackle the Teaching and Learning Festival’s theme of “digital learning”: “I think our current generation of teachers haven’t quite caught up with just how powerful the technology is, and how much it can enable creativity.”

White himself is constantly learning. He’s a practicing cancer surgeon who now knows how to make videos and record his own podcasts. He also runs a YouTube channel, has an app and gave a TED Talk.

Ultimately, though, White is having fun. It’s a habit he’d like to encourage in other educators.

“I think most of us have an idea that is sitting on the corner of the desk — that we could take and develop a bit, then give to the students and say, ‘What do you think of this crazy idea?’”