Alexandre Bilodeau: life after the Olympics

Update: The Concordia student and record-breaking skier just landed the national title of Athlete of the Year
|
By Tom Peacock 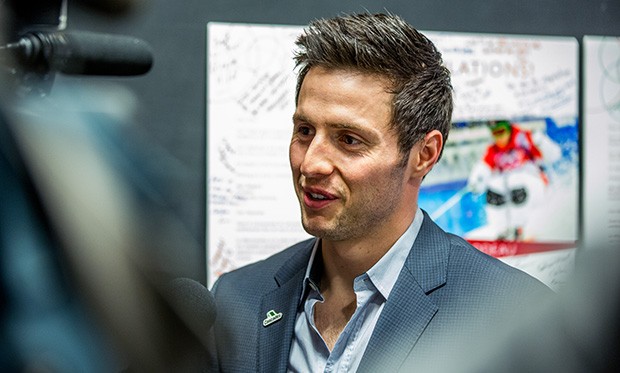 Alexandre Bilodeau, world champion and John Molson School of Business student: "Give me numbers and I’ll find my way out, no problem." | Photo by Concordia University

UPDATE: On Friday, December 12, six days after voting closed in the national online poll, competition organizers announced that Alexandre Bilodeau has been elected the 2014 Air Canada Athlete of the Year. Congratulations, Alex!

With his final exams just around the corner, two-time Olympic mogul skiing champion Alexandre Bilodeau is starting to feel the pressure.

“I’m worried about having three exams in 48 hours!” he says, laughing. “It’s very tight. The schedule didn’t come out in my favour this time.”

Bilodeau chose to pursue his bachelor's in accounting at Concordia's John Molson School of Business (JMSB) because it offered him a flexible schedule that would accommodate his demanding athletic career.

Now that he's officially retired from skiing, though, he's enrolled as a full-time student, and is taking four classes. “I’m terrible with things that I have to learn by heart… But give me numbers and I’ll find my way out, no problem.”

Four years ago, Bilodeau triumphed over a different kind of stress in Vancouver, when he became the first Canadian to win Olympic gold on home soil. At the Sochi Olympics earlier this year, he put together a run for the ages in the mogul finals, earning the top podium spot for a record-breaking second time.

These stellar performances recently put Bilodeau in the running for the 2014 Air Canada Athlete of the Year. The other nominees are two fellow Olympians: curler Jennifer Jones and bobsledder Kaillie Humphries. Voting is open to the public and ends December 6; the winner will be announced on December 12.

“It’s very nice for me to hear,” Bilodeau says. “I left on top, but it’d be great to be nominated.”

The JMSB student finished his athletic career with a dual mogul world title and silver in single moguls. With 48 podium finishes, he is the most decorated men’s mogul skier ever to compete for Canada.

These days, Bilodeau is as busy as ever. As well as being enrolled full-time at JMSB, he has regular professional speaking engagements and acts as a corporate ambassador for KPMG, the accounting firm that sponsored his skiing career.

In July, mayor Denis Coderre named Bilodeau president of the organizing committee for the 40th edition of the Quebec Games, which take place in Montreal in 2016. An estimated 4,000 competitors under the age of 17 are expected to participate.

Bilodeau is very passionate about this particular role. “I'm learning so much and meeting with a lot of great people who have the health of sport in Quebec very close to their hearts. They really want to make good changes.”

It may well contribute to his next career. “I don’t have it in me to be a coach. But I do have it in me to give the resources to kids that allow them to perform and reach their full potential. It’s my way of getting involved.”

A few nearby hills are already open for business, but Bilodeau isn’t strapping on his skis. Instead, he’s enjoying playing hockey — something he wasn’t permitted to do before his retirement, due to the threat of injury.

To vote for Alexandre Bilodeau visit the Air Canada Athlete of the Year competition website. Canadian citizens can participate a maximum of one time per day until December 6, 2014.