One game away from a provincial championship 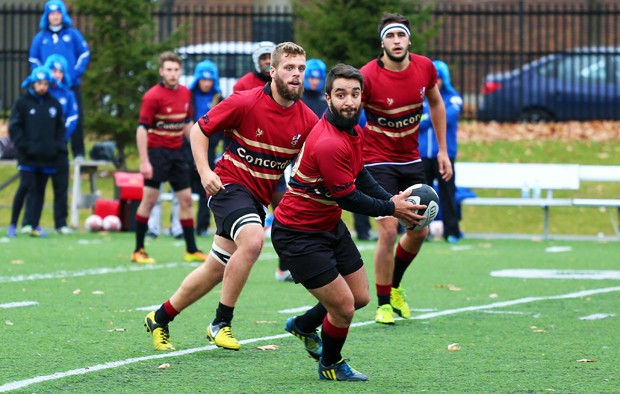 Concordia is number one in the Réseau du sport étudiant du Québec. Left to right: Andreas Krawczyk, Joey Fulginiti (with the ball) and Stanislas Prehu. | All photos by Brianna Thicke

This season, in homage to the long, unruly beards favoured by the Canadian rugby team during the last World Cup, some members of this year’s Stingers squad have been sporting their own fearsome facial hair.

One thing’s for sure, the McGill Redmen better “fear the beard” when they come to Concordia on Sunday for the men’s rugby Quebec university conference championship game.

This will be the fifth year in a row that the Concordia Stingers face McGill in the final round. The Redmen have been the reigning champions for the past eight years running, but Stingers team captain and fly-half Yannick Fortin hopes things will be different this year.

“We know we have to come out there strong, McGill has had our number for the past few years. But we’re the number-one team going in and there’s a reason for that,” says Fortin.

Concordia qualified for the championship game after defeating the Université de Montréal Carabins by a narrow 16-14 margin in the Réseau du sport étudiant du Québec (RSEQ) playoffs on November 16. 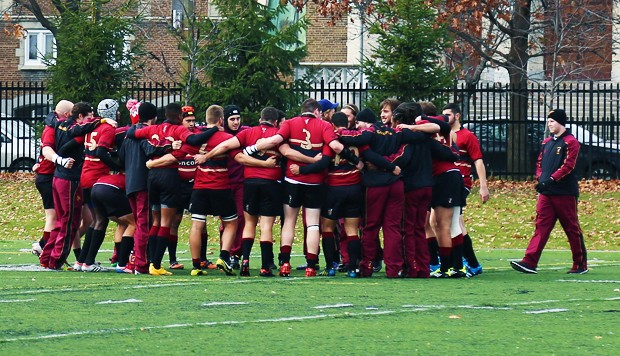 This is the fifth year in a row the Concordia Stingers face the McGill Redmen in the final round of playoffs.

Head coach Clive Gibson says his Stingers are ready for the championship match-up, even though they almost let the game against the Carabins get away from them. “It was a lot closer than it should have been or needed to be.”

The win, and the Stingers’ number-one spot at the end of the regular season, earned them home-field advantage in the RSEQ championship game against the McGill Redmen on Sunday, November 23 at 12:30 p.m.

The first 20 minutes of the game was spent in Concordia’s end as the Carabins went on the attack. Yet the Stingers’ refused to break, keeping the score tied at 0-0.

Then, in the 27th minute, veteran Concordia winger Fred Kacou broke away from the crowd, scoring a try and making it 5-0. Fortin soon followed up his effort with a second try, widening Concordia’s lead to 10-0 with ten minutes left in the first half.

When the players returned to the field for the second half, the temperature had plummeted and the flurries were more frequent. Many of the spectators were bundled in blankets, scarves and hats.

The Stingers kept up their dominance early on. Anthony McQueen and Joey Fulginiti, connected on two penalty kicks, widening Concordia’s lead to 16-0.

That’s when the Carabins started fighting back. 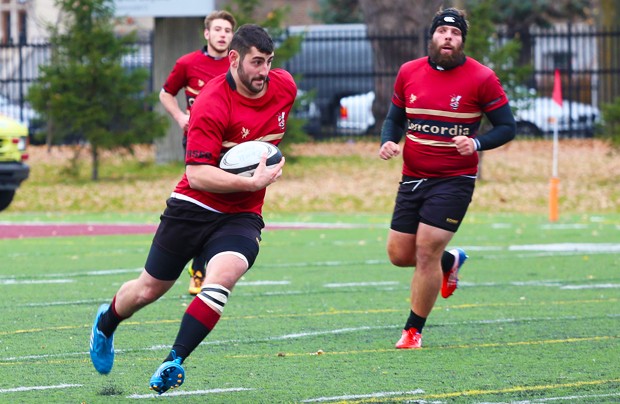 The last time the Stingers won the championship game was in 2005. Coach Gibson hopes to reclaim the championship title and win on home ground this year. Left to right: Matthew Izzard, Erik Samuel (with the ball) and Nicolas Krawczyk.

The score was 16-14 with only four minutes left to play. With a berth in the championship game at stake, Concordia defended its two-point advantage.

Both teams were locked in a ruck five yards from the Concordia end, with Montréal pushing closer and closer to scoring when the referee blew the final whistle.

The Carabins had put up a good fight, but the Stingers prevailed, advancing to the final game of playoffs next Sunday at the Concordia Stadium against the McGill Redmen.

“The boys showed a lot of courage, a lot of resiliency out there,” says Fortin. “For the last 15 minutes, we came out strong and we just had to keep moving forward.”

Come cheer on the Concordia Stingers on Sunday, November 23, at 12:30 p.m. when they face the McGill Redmen in the Championship game at the Concordia Stadium on the Loyola Campus. Tickets to watch the game are $5.