New weekly farmers’ market is a hit on campus 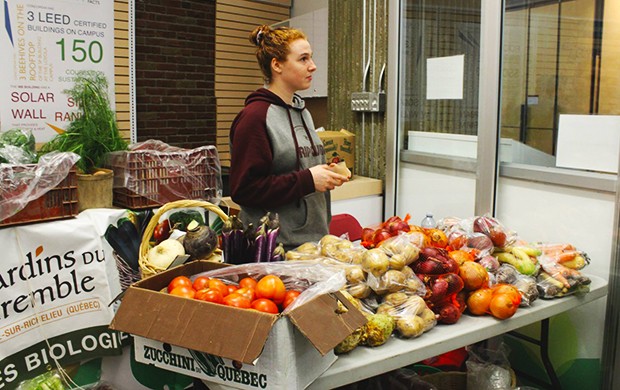 A new weekly farmers’ market at Concordia in the mezzanine of the Hall Building (H) is a passion project for two anthropology undergraduates.

Alejandra Melian-Morse and Kasha Paprocki’s interest in food politics was always somewhat peripheral until a trip to Central America over the summer opened their eyes.

The two flew down to Costa Rica on a whim, along with two fellow anthropology students. There they spent a few weeks touring the lush countryside, staying at farm hostels and renting hammocks for $4 a night.

Plantain, banana, coffee, varieties of mango unseen in Montreal — the crops the foursome encountered while travelling Costa Rica’s Pacific coast and around Nicaragua’s Ometepe Island were impressive. They were even more struck by the relationships farmers had with the land and the communities that consumed their food.

“I wanted to be able to establish that kind of relationship with farmers,” says Paprocki.

Growing up in Ottawa, her household ate “a lot of Kraft products,” due in part to her stepfather’s administrative position at a major supermarket chain.

“I’ve just learned so much about the industrial food system, that I feel really disgusted by supermarkets, and just the products in general. What I really cared about most was getting to know the people who are producing the food I’m eating,” she says.

In Montreal, she would make the hike to the Jean-Talon Market when she could. But what if there were a farmers’ market on campus?

“We wanted an opportunity to shop at a market and it be convenient in our lifestyle,” Paprocki says.

When they returned to Montreal and resumed their studies in the fall, they decided to start a farmers’ market as part of an internship course on social economy, supervised by Satoshi Ikeda.

The market she and Melian-Morse run with the help of six volunteers offers a small collection of goodies to the university community — seasonal vegetables, honey, tea, bread, meat — all locally produced and organic. Also participating are the Concordia Greenhouse, the City Farm School and the rooftop garden. The market is held every Wednesday from 12 p.m. to 6 p.m. in the Hall Building’s Green Space.

“Everyone seems to really love it,” Paprocki says. More than 500 people stopped by during the first market, on Oct. 29.

The market will wrap up over final exams and the holidays and will return at the start of the winter semester.

Melian-Morse, 21, plans to continue running the market after Paprocki graduates this spring. She says she hopes to move the market to a bigger space next fall — ideally the Library Building Atrium — to accommodate more vendors.

Melian-Morse has enjoyed the Anthropology Program, but remarks that it’s been mostly theoretical until now. “It feels really good to actually be doing something, instead of talking about making things happen,” she says.

Taking Ikeda’s social economy internship course allowed her to get creative on a subject she cares passionately about. Ikeda, who holds the Canada Research Chair in Political Sociology of Global Futures and who teaches in the Department of Sociology and Anthropology, has a keen interest in sustainable agriculture.

He put together the social economy internship course (SOCI/ANTH 498U) to tap into many sociology and anthropology students’ interest in social justice and engagement by giving them opportunities to get involved with the community.

The social economy model, Ikeda says — in which businesses are owned collectively by members — promotes openness, inclusion and collaboration.

“So, my motivation to offer the internship course [...] is to show how great it is to work in social economy and how they can enjoy themselves by helping others,” Ikeda says. “The project development and implementation helps students realize their ability and passion to initiate meaningful projects and learn how to work with other people for a common objective.”