Your Olympic dreams could come true at the Stinger Dome 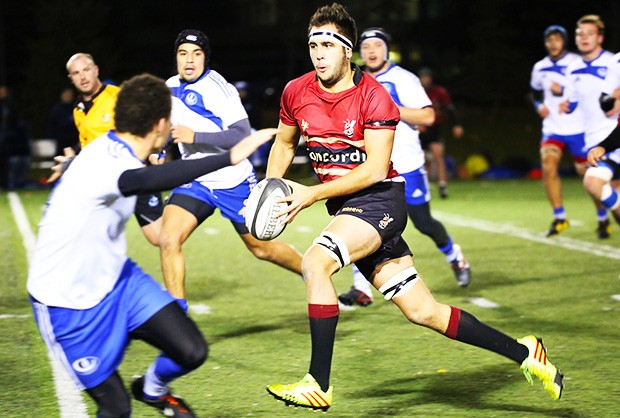 The rugby team advances to the playoff semifinals, hosting the Montréal Carabins at the Concordia Stadium on Sunday, November 16 at 1 p.m. | Photo by Brianna Thicke

If this sounds like you, consider registering for a talent identification camp happening at Concordia on Saturday November 15.

That’s when scouts from Rugby Canada will be at the Stinger Dome to recruit top-level athletes for its National Sevens Development Program. Registration for the Try 4 GOLD is at noon and athletic testing is from 1 to 5 p.m.

Rugby sevens — a version of the popular field sport in which teams are made up of seven players, instead of the usual 15 — will be played at the Olympics for the first time in Rio de Janeiro in 2016.

Concordia is the only Montreal location in Rugby Canada’s nationwide Try 4 GOLD campaign.

Aiming to find athletes with a natural predisposition for rugby, the testing includes jumps, sprints and no-contact side games. The tryouts are open to participants from all athletic backgrounds, and prior rugby experience is not required.

François Ratier, the head coach for Rugby Canada’s National Women’s Fifteens team, will be at the Concordia Talent ID Camp to evaluate participants.

“Rugby sevens is a fast-paced, exciting sport. It is a game that requires speed, skill and  strength and is played by rugby’s fastest and fittest athletes, both male and female,” says Ratier.

Ratier was an assistant coach for the Stingers men’s rugby team in 2009, so he’s familiar with the facilities on campus. This familiarity pushed him to want to hold the tryout at Concordia.

“When it comes to efficiency, the Stinger Dome is a high-quality installation,” says Ratier, adding that it ensures the Talent ID Camp happens regardless of rain, shine or snow.

The Canadian women’s fifteens team made history last summer when it made it to the finals of the 2014 Women’s Rugby World Cup in France. Two Concordians were on the team: personal trainer Kim Donaldson and alumna Latoya Blackwood.

On October 25, the Stingers women’s team made their eighth consecutive appearance at the Réseau du sport étudiant du Québec’s (RSEQ) provincial final, finishing their season with silver medals. The men’s team, ranked first in RSEQ, is just beginning its playoff run, the first game is against the Montréal Carabins on Sunday, November 16 at 1 .p.m. The game will be at the Concordia Stadium on the Loyola Campus.

Montreal is the third location for Rugby Canada’s recruitment campaign. After Montreal, the tryouts move to Sherbrooke, Red Deer and Burnaby.

The Ottawa and Toronto Talent ID Camps attracted over 400 athletes combined. Ratier hopes that due to its popularity, the Try 4 GOLD campaign becomes an annual event.

Both the Canadian Women’s and Men’s Sevens Teams had excellent seasons this year in the International Rugby Board Sevens World Series. The women finished third while the men finished sixth, a new record.

Do you have what it takes to compete at the Olympic level? You won’t know until you try for gold. Visit Rugby Canada’s website for more information on the Try 4 GOLD campaign.

If playing rugby isn’t for you, then make sure to catch the men’s Stingers rugby team in its first home playoff game against the Montréal Carabins. The game is on Sunday, November 16 at 1 p.m. at the Concordia Stadium on the Loyola Campus.