On the road with the Stingers 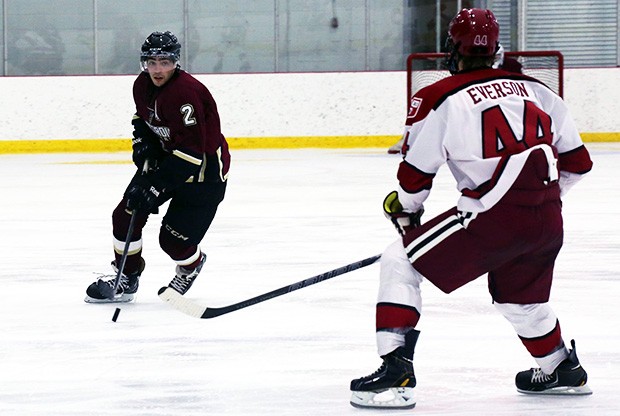 With a big weekend in store for the team, coach Figsby didn’t want to think too far ahead, concentrating on one game at a time. | All photos by Brianna Thicke

Being a Concordia Stinger isn't all glitz and glamour. Facing midterms, essays and exams can be intimidating — but juggling travel, practices and game schedules adds a whole new level.

“This was probably one of the toughest weeks, especially since it’s mid-term season. The players certainly put their time management skills through the test on their third weekend away in a month,” said Kevin Figsby, head coach of the Concordia men’s hockey team.

He is referring to the weekend of October 17: three games in three days for the Concordia men’s hockey team.

On Friday, October 17, they hosted the Patriotes from the Université du Québec à Trois-Rivières, then travelled the next day to Kingston to face the Queen’s Gaels, and finally returned home in the early hours of Sunday morning to play an exhibition game against the Harvard Crimson.

Men’s hockey has an especially challenging schedule, because the players often travel to Ontario universities. Unlike Concordia’s other varsity teams, which are part of the Réseau du sport étudiant du Québec (RSEQ), the men’s hockey team is part of Ontario University Athletics (OUA).

Figsby knew playing three games in three days was not ideal; however, the opportunity to welcome the Harvard Crimson could not be missed. “This was a chance to showcase our athletes and we are hoping to turn this into an annual event,” he said.

With nine rookies, nearly half the team is adapting to the dual demands of academics and athletics.

Take first-year right forward Victor Provencher. He acknowledges the challenge of being both a student and an athlete, but sees it as an investment for the future.

“Everything is new for me. In junior league, hockey comes before school, but here it’s school first, then hockey,” said Provencher, who played for the Chicoutimi Saguenéens before becoming a Stinger. 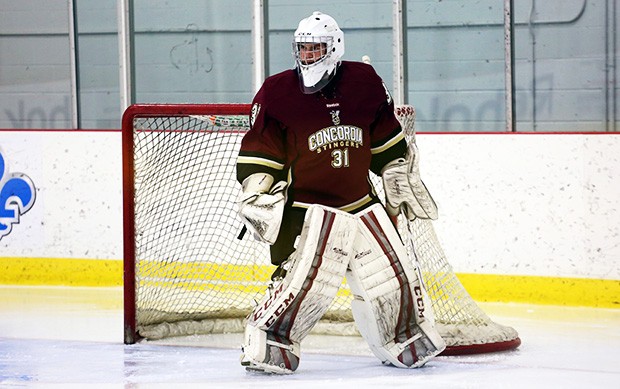 Goalie Robin Billingham is ranked third in the OUA for number of shots blocked, with 217 saves so far this season.

The coach’s approach, with three games in three days, was to stay focused.

“We’re just looking at taking it one day at a time,” he said. “We’re concentrating on how well we can perform tonight, and nothing else.”

The Patriotes are a tough rival: they rank fourth in Canadian Interuniversity Sport (CIS) and first in OUA East.

Although the Stingers played well, the Patriotes finished the game 7-4. And while the Stingers might not have won, they certainly had the loudest fans. The Concordia SWARM took over a section of the stands at the Ed Meagher Arena and supported the team with enthusiastic cheers.

As the players left the ice and proceeded to the locker rooms, the SWARM lived up to its name, crowding around the Stingers with one last round of applause.

Saturday: Off to Kingston

On the three-hour bus ride to Kingston, you wouldn’t know that the Stingers had their game the night before. The guys were chatting and telling jokes.

Some slouched over laptops and textbooks, or found other ways to pass the time. I kept hearing ‘It’s Tiffany!’ from the back of the bus. I thought the players were excited to have a writer along for the trip — it turned out a few rookies were playing Life on an iPad, and I shared my name with a default character.

When we arrived at the Kingston Memorial Centre just after 5 p.m. for a game starting at 7:30, we were met with an unexpected sight: a fan holding a binder of Stingers action shots asking for autographs. Margann Laurissa — a self-described “freelance hockey statistician” — has been collecting signatures since 2006, and now boasts a collection of nearly 2,000 autographs.

I joined veteran player Ben Dubois in the stands. While we watched the tail end of a youth hockey game and waited for 7:30 to roll around, he explained some of the complexities of balancing schoolwork and athletics.

“I think a lot of the guys try to finish their school work during the week so they can have the weekends to focus on hockey,” he said.

The Gaels game was a constant fight for the top. Both teams came out strong, with Queen’s leading in the first period 1-0.

Dominic Beauchemin scored the equalizer within the first 30 seconds of the second period, and Sean Blunden added another point to bring the score 2-1 for the Stingers. Then the Gaels caught up, scoring one goal before the end of the second period and another in the third.

The game could have gone either way with these closely matched rivals, but the Gaels ultimately finished the game 3-2.

The Stingers swiftly packed their equipment and stored it on the bus. The faster they took off, the faster they’d get home and get more sleep before facing Harvard.

Assistant captain Youssef Kabbaj loves away games, but recognizes the drawbacks of being on the road sometimes for four-, six- or eight-hour long trips.

“It’s hard but you get close with the guys. You don’t have a choice but to talk to everyone, and the rookies get integrated way easier that way,” he said.

The team didn’t let the loss dampen their spirits or their anticipation about playing their biggest rival yet: the Harvard Crimson. 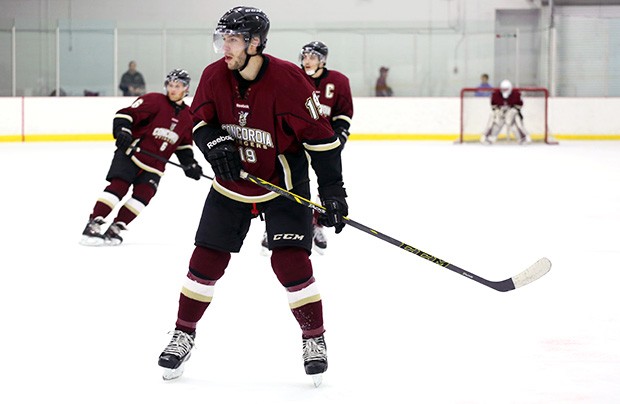 The Concordia Stingers men’s hockey team is ranked third overall for number of goals scored, with an accumulated 35 goals.

“What you’re going to see today is whatever they have left in their tank emptied on the ice,” said Figsby. “There is no expectation other than that we are going to compete with the best of what we have left to compete.”

Circumstances didn’t exactly favour the Stingers, coming off of two games in a row and missing eight players to exams and injuries. Harvard, still in its pre-season, hadn’t yet selected their final team. For some of the Crimson, the exhibition game was their chance to shine on the ice and claim a spot on the lineup.

But to Figsby, its value was clear. “This game means nothing in way of standings in a league, but what it does is it develops the student athlete’s character.”

For a team that had returned to the Loyola Campus at 1:30 that morning, the Stingers played exceptionally well: they competed with Harvard for the full 60 minutes. Although the Stingers lost 7-2, every player gave everything they could muster.

The Harvard Crimson’s head coach Ted Donato was also happy with the clean game and the trip his team had taken. “It’s nice to have the chance to come up to Montreal and play a great university team like Concordia,” he said. “We’re very grateful for the opportunity to play, and for the way we were treated.”

On the Stingers side, Hinse was proud of how his team played. “It was incredible,” he said. “Every line played their hearts out.”

Support the men’s hockey team at 7:30 p.m. on Friday, October 31, as the Stingers meet the Ridgebacks from the University of Ontario Institute of Technology at the Ed Meagher Arena on the Loyola Campus (Recreation and Athletics Complex; 7200 Sherbrooke St. W.).