Concordia plays host to Harvard at an exhibition hockey game

On October 19, the Stingers men's team is facing the Crimson for the first time in the university’s history
|
By Tiffany Lafleur 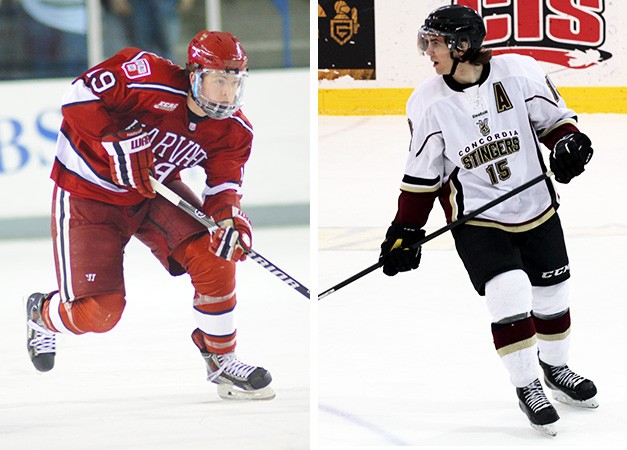 Harvard vs. Concordia: The puck drops at 2 p.m. on Sunday, October 19 at the Ed Meagher Arena on the Loyola Campus. Photos by Gil Talbot and Brianna Thicke

When Harvard calls and asks if you’re interested in a game of hockey, you say yes.

On Sunday, October 19 at 2 p.m., it will be Montreal vs. Boston as Concordia hosts the Harvard University men’s hockey team. The pre-season exhibition game, which is being held at the Ed Meagher Arena on the Loyola Campus, marks the first time Stingers will compete against the Crimson.

“Concordia — year in, year out — attracts good students and good hockey players,” says Ted Donato, a former NHL player and the head coach of the Harvard men’s hockey team since 2004. “It’s an opportunity to play against a competitive, reputable university. We’re very excited.”

Stingers captain Olivier Hinse is eager for the game to start. He hopes that as many people as possible will come out to support the Stingers. “We want to prove that Canadian university hockey is always improving.”

Kevin Figsby, the Stingers’ head coach, agrees: “We’re pretty thrilled they chose to play against us and wanted to come to Montreal. It gives us another opportunity to showcase our Stinger’s men’s hockey program.”

He says the exhibition game against Harvard is an unprecedented opportunity for the Concordia student body to see a top-level National Collegiate Athletic Association (NCAA) team play a top Canadian university team, and to be proud of their school. “We’ve been invited to some good schools over the years — Vermont, Yale, Brown. And now we get Harvard here.”

The Harvard Crimson men’s hockey team is in Division 1 of the NCAA. Its program has produced 25 NHL players over the years: Craig Adams, Dominic Moore and Alex Killorn, to name three.

“We have a great amount of respect for the players and the coaching staff at Concordia. It will be a great challenge,” says Donato, acknowledging Harvard’s history of recruiting great Montreal players, and the long-standing rivalry between Boston and Montreal hockey teams.

Harvard forward Philip Zielonka is from Montreal and remains an avid Habs supporter, even though he now resides in Boston Bruins territory. He insists he doesn’t feel conflicted about playing against a team from his hometown — he’s just happy to be back.

“When I first heard about it, it was still in the works, but I was definitely hoping it would come true,” says Zielonka. “Unfortunately, we won't be spending much time in Montreal, but I think as a team we’ll enjoy our time there, while also getting ready for our season.”

Hinse has a positive outlook for the upcoming season. Although he doesn’t want to make any predictions, he believes the Stingers have a strong team. “We'll take it game by game.”

Harvard is ranked as the second best university in the world, according to Times Higher Education’s 2013-14 World University Rankings. Earlier this month, Concordia’s John Molson MBA ranked third in Canada and 81st in the world in The Economist’s “Which MBA” survey.

Cheer on the Stingers as Concordia faces Harvard, one of the most esteemed Ivy League universities. The puck drops at 2 p.m. on Sunday, October 19 at the Ed Meagher Arena (7200 Sherbrooke St. W.)