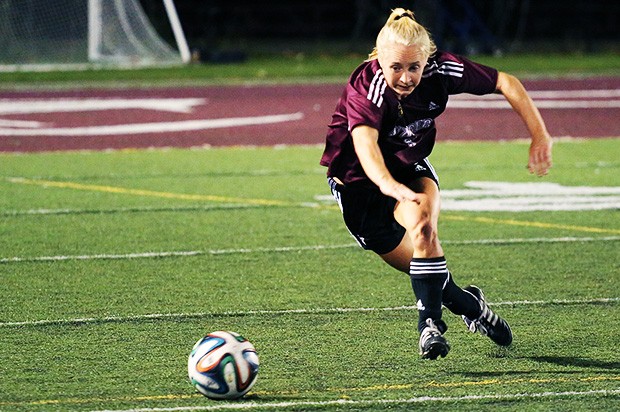 The Stingers last home game of the season will be on October 17 at 8:30 p.m. against the UQAM Citadins. (Pictured here: Lindsey Brooks.) | Photos by Brianna Thicke

Concordia’s athletes have added a little ray of sunshine in the daily lives of children coping with illness.

On Friday, October 3, during the ninth annual Erica Cadieux Memorial Game, the Stingers women’s soccer team collected bags and bags of gifts that will be donated to the Montreal Children’s Hospital.

The memorial game honours the spirit and legacy of Stingers soccer player Erica Cadieux who passed away in January 2006 after being hit by a car.

This year marked the first time Concordia has won the memorial game in its nine-year history, finishing ahead of the UQTR Patriotes by a score of 2-1 in a nail-biter.

The win places the Stingers in fourth place in the Réseau du sport étudiant du Québec (RSEQ) standings and gives them a chance at making the playoffs.

The Stingers collected gifts of all kinds — crayons, markers, DVD movies, Play Doh and cash — from spectators and players from both soccer teams as well as the Concordia men’s hockey team, men’s soccer team and football team. 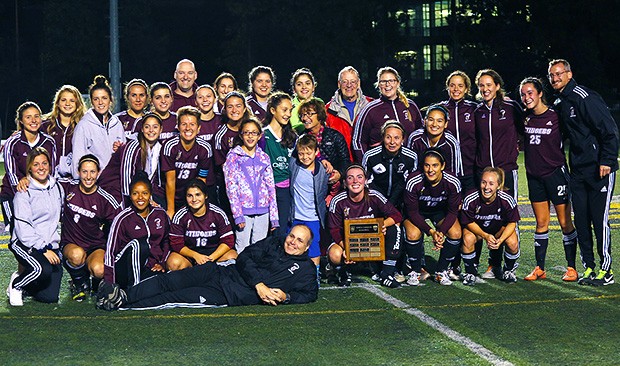 For the first time in the history of the memorial game, Cadieux's family presented the plaque to the Concordia team.

Before the game, the starting line-up of the women’s soccer team, joined by the captain of the men’s team, Ramin Mohsenin, presented the bulk of the donations to the members of Cadieux’s family, including her widower Carlo Spadafora and daughters Bianca, 10, and Olivia, 9.

“The girls understand the concept that their mother played for the Concordia Stingers. They’re also playing soccer,” said Spadafora. “They have that attachment to their mother through the sport. They look forward to the Concordia game every year.”

The road to victory was not an easy one.

“This is the type of game that, 20 years from now, the girls will look back and say: ‘Remember that time?’ For me, that’s what sports is all about,” said Stingers head coach Sanchez.

The Stingers led the game 1-0 throughout the first half, with central defender Laurence Thivierge scoring the first goal after 13 minutes.

The ball stayed in in the Patriotes’ territory for most of the first half, with the Stingers getting a few very good chances at another goal.

Early during the second half, the Patriotes nearly scored, but Stingers defender Lindsey Brooks managed to head the ball away from the net. 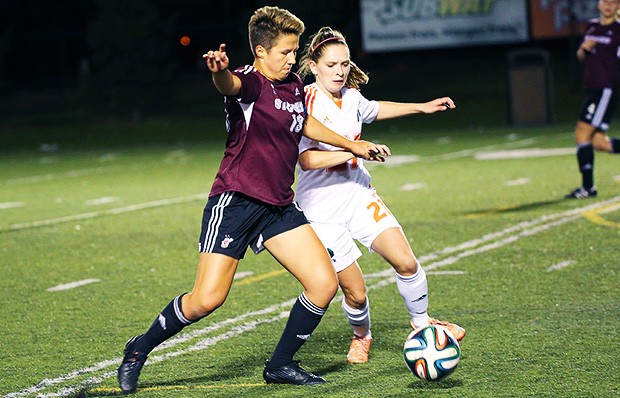 The Stingers are now fourth in RSEQ rankings and have a chance at making the playoffs.

Then, with only a few more minutes left in the game, the Patriotes scored, tying the game. The goal came on a free kick, taken by Patriotes goaltender Gabrielle Lambert, who got the ball up to Marie-Laurence Ouellet.

Concordia goaltender Alexandra Lato’s almost got ahold of the ball, but it slipped from her grip and Ouellet kicked it into the net, tying the game.

With a playoff berth on the line, the Stingers played fiercely during the last five minutes, but struggled to get the ball into the Patriotes' half. Goaltender Maria Kaperonis came into the game for Lato, who was injured, and blocked two shots on goal.

In injury time, Stingers midfielder Shauna Zilversmit kicked the ball over Lambert's head and into the net, winning the game for Concordia 2-1.

For the first time in the history of the memorial game, Cadieux’s family presented the plaque to Concordia’s captains, Alex Dragan and Kayla Myre.

“The first few years were tough, but now it’s a celebration. There’s a bit of a bittersweet element to it, but we focus on the ‘sweet’ of the bittersweet,” says Spadafora. “Tonight’s outcome is a good one to smile about.”

Catch the Stingers in their last home game of the season on October 17 at 8:30 p.m. against the UQAM Citadins at the Concordia Stadium on the Loyola Campus.