Concordia to face the UQTR Patriotes in a memorial game on Friday, October 3
|
By Tiffany Lafleur 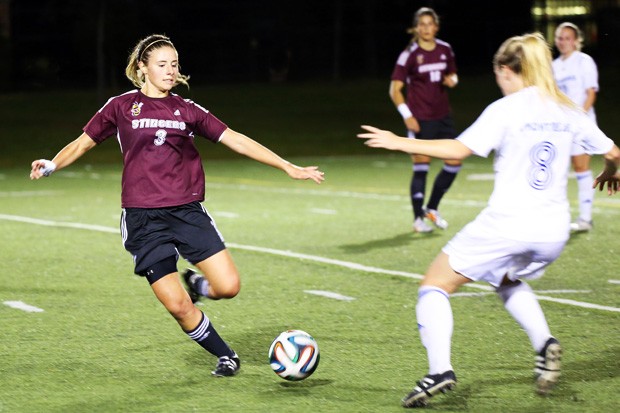 The Concordia women's soccer team is getting geared to win Friday night's game against UQTR. | Photos by Brianna Thicke

Some games mean more than others. When the players on Concordia’s women’s soccer team lace up their cleats on Friday, October 3, they’ll be playing for more than a victory. They’ll be playing to honour the memory of a former Stinger in the ninth annual Erica Cadieux Memorial Game.

This year, the Stingers will take on the UQTR Patriotes at 8:30 p.m. at the Concordia Stadium on Loyola campus.

“The game serves as a reminder that there’s more to the sport than just the few years you spend at school. The friendships, the memories you build as a student athlete are a legacy,” said head coach Jorge Sanchez.

Cadieux’s memory and legacy will be kept alive at the memorial game. A midfielder and defender, she played for the Stingers from 1992-1994. A devoted mother and lawyer, Cadieux was struck down and killed by a car in January of 2006 at the age of 34 while out walking with her daughter Bianca, who miraculously survived the accident. 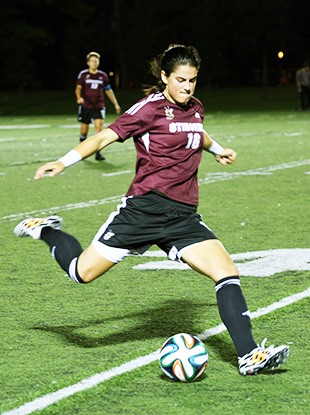 When the Stingers went up against the Patriotes on Friday, September 19, they tied the game. This time, the Stingers want to win the game and have their name on the Cadieux plaque.

“We need to be mentally prepared. We tied last time, and we’d like to play well for the family,” said fourth-year player and Captain Alex Dragan. “It puts a lot of pressure knowing they’ll be there watching. You want to play well.”

Once she graduates, Dragan plans on coming back to support future Stingers.

“I’ve made great memories playing here. A couple of years down the road, I might not know the girls but if I’m still in Montreal, I’ll come support them.”

Although there is no charge to attend the game, the soccer team will further show its respect for Cadieux and her family by collecting money and small gifts for the Montreal Children’s Hospital. Donations of earphones, infants' toys, DVD movies, decks of cards, stickers, markers, bubbles, crayons and Play-Doh would be appreciated by the Child Life Services department.

Cadieux’s widower Carlo Spadafora and their two children Bianca, 10, and Olivia, 9, will make a special trip from Sault Ste. Marie in Ontario to attend the game. Her family will collect donations prior to the game and will present a plaque to the captains of the winning team.

The men’s team is seventh in RSEQ standings, with 4 ties and 3 losses. They closed their 2013 season ranked fifth in RSEQ.

Help brighten a child’s day and support the Stingers in honouring a former player’s legacy at Friday’s Erica Cadieux Memorial Game. Kick-off is at 8:30 p.m. on Friday, October 3 at the Concordia Stadium on the Loyola Campus.

If you can't make the game, but would like to contribute, you can drop off donations and small gifts, care of the Stingers women's soccer team, to Room 1511 in the Recreation and Athletics Complex on the Loyola Campus (L-RA 1511).

The men’s team will be playing beforehand, at 6:30 p.m., also against the UQTR Patriotes.