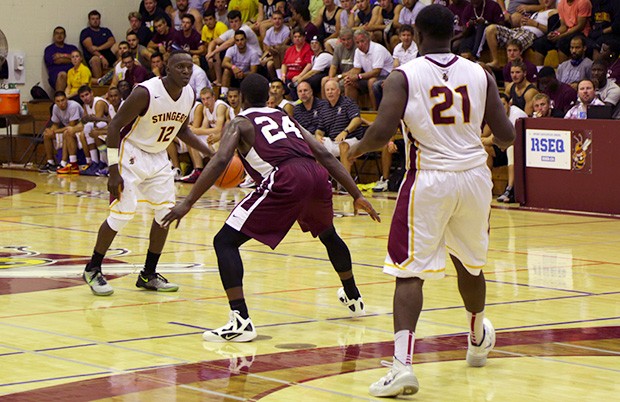 All benefits from the game will go to DJ Sports Club, a Montreal organization benefitting children aged between 7 and 17.

For once, the Stingers and the Redmen will be playing on the same side.

Concordia basketball players will join players from the McGill Redmen to form Team Jock in this year’s Pop VS Jock charity basketball game on Saturday, September 20.

All proceeds will go to DJ Sports Club, a non-profit charity organization in Montreal’s south west borough, offering programs in sports and education to youth aged seven to 17 years old. The foundation, whose vision is to “help prepare youth to be productive members of society,” was founded by former Stinger basketball player Dexter John in 1997.

“The charity basketball game means a lot. The funds raised have helped lower the cost of our programs,” says John. “It brings recognition to the club, and the kids get to be part of Pop Montreal.”

John Dore, Head Coach of the Concordia men’s basketball team says: “We support Dexter and his charity. We support his event because in turn it supports athletics, academics and the players who participate.”

Dexter John, a Concordia alumnus, will play alongside Win Butler from Arcade Fire, a McGill graduate on Team Pop. John has been playing against members of the current varsity team since the charity had its first run three years ago.

“It’s a way for me to stay involved with the Stingers and it’s good experience for them. It’ll be a very interesting game,” says John.

This is the first time that Stinger Mukiya Post will represent Concordia on the Jock team.

Gabe Riche played in the first Pop VS Jock game in 2012 and will be representing Concordia for the second time.

“Basketball gives people something to do, and for some, it’s a reason to stay in school,” says Riche. “It’s good to know the sport being supported.”

For Riche, it’s strange to play with McGill instead of against McGill, saying: “we’ll do what we have to do to win, we’ll set aside our differences and work together.”

Mukiya Post, Xander Jean, Michael Fosu, Jonathan Mirambeau and Gabe Riche have been selected to represent Concordia and will play on Team Jock.

The game is part of the Pop Montreal International Music Festival going on from September 17-21 and will be held at the McGill University Sports Centre. Doors open at 2:30 p.m. This is the third year that the event takes place, and the third time that Stingers from the basketball team take part.

The Stingers/Redmen Jock team will play against Win and Will Butler from Arcade Fire on Team Pop. The team was handpicked by Win and includes friends and acquaintances such as former San Antonio Spurs player Brent Barry and current Spurs player Matt Bonner, along with a few other musicians, such as Bon Iver frontman Justin Vernon and Strokes bassist Nikolai Fraiture.

Spectators can also expect some very special musical performances at the halftime show, which will feature Kid Koala and Win Butler of Arcade Fire.

By attending the game, not only will you be supporting youth sports and education, but you’ll get the added benefit of watching some Stingers players in action before the regular season starts on Thursday, November 6. against Laval.

General admission tickets can be purchased for $20 plus service fees.

For more information, check out the POP Montreal website.