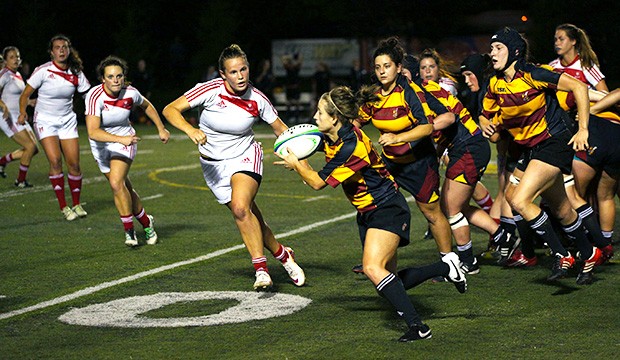 The Stingers beat the McGill Martlets 34-20 on Wednesday September 10, 2014. | Photos by Brianna Thicke

For the sixth consecutive year, the Stingers have brought home the Drummond Cup to an appreciative student body, faculty and staff.

The women’s rugby team won 34-20 against the McGill Martlets on September 10 during the 10th annual Kelly-Anne Drummond Memorial Game at the Concordia Stadium.

“It’s always gratifying to beat McGill,” says Hughanna Gaw, one of the team captains. “The Drummond Cup is the most emotional game of the season because we’re playing for an athlete.”

The trophy honours the late Drummond, a member of Concordia’s women’s rugby team from 1999-2001, who died tragically on Oct. 4, 2004. Her boyfriend was found guilty of her murder in April 2006. The game has been held every year since, keeping her memory alive in the tight-knit rugby community. Five hundred fans turned up for the Stingers victory over their cross-town rivals.

Drummond’s mother, Doreen Haddad, handed the cup to the captains of the victorious Stingers team, Hughanna Gaw and Sam Bennett. Drummond’s father, John Drummond, wore his daughter’s old jersey to the game, just as he’s done for the last 10 years. Her jersey, #3, was retired after her death by Graeme McGravie, head coach of the women’s rugby team.

“We know domestic abuse is happening, we’re trying to bring awareness,” says McGravie. “As long as the Drummond cup affects people in a positive way, I’m happy. I wish we could do more.” 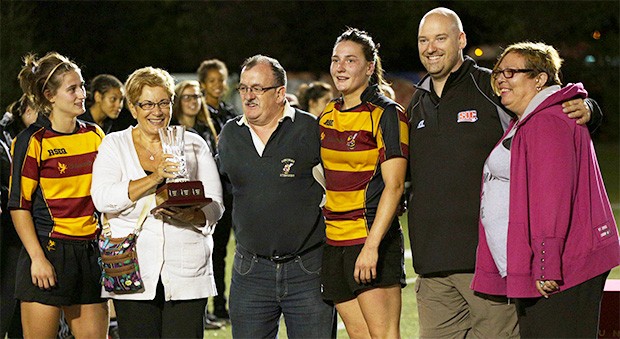 Along with being a tribute to the former Stinger, the cup is also a chance to raise money for Women Aware, an organization supported by Drummond’s parents that offers long-term support to victims of domestic violence. This year’s game raised $1,500. McGravie estimates that over the years the game has raised close to $20,000.

The men’s Stingers rugby team collected money in the stands while the women played. “We’ve always supported it as an opportunity to get out the message that that type of activity is unacceptable,” says Clive Gibson, head coach of the men’s rugby team.

After the game, the McGill players also gave Haddad an envelope with money they’d raised on their end.

The Stingers stayed ahead of their opponents the whole game. Second-year player Alex Tessier scored the most points with two tries, three converts and two penalty goals. Two tries were scored by veteran player Hughanna Gaw, and Erika Ikonomopoulos scored one.

Says Gaw: “It’s still early in the season. We’re still getting our bearings and learning how to play well together.”

The next home game will be on Sunday, Sept. 21 against the Sherbrooke Vert et Or at 4 p.m. at the Concordia Stadium on the Loyola Campus.

If you missed the game but wish to donate, you can still do so on their website.