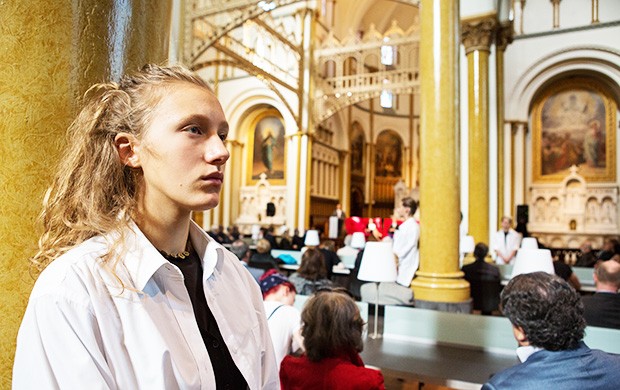 A performance by Concordia theatre students midway through the official opening of the Grey Nuns Building brought home the significance of the place, and its new mission.

It began with the voice of one student reading from a letter written by Marguerite d’Youville, who founded the Sisters of Charity, better known as the Grey Nuns of Montreal, in 1737.

After a brief pause, the voice of another student chimed in, reading from the famous Le Refus Global manifesto, followed by a Native voice, reading a statement of solidarity in the Cree language.

Other voices joined in and began to overlap one another, swelling to a polyphony, which reverberated off the magnificent, vaulted ceilings of the former Chapel of the Invention of the Holy Cross, now home to Concordia’s new Reading Room and the centrepiece of the newly transformed Grey Nuns Building.

Then, just as soon as it had begun, it was over. Silence reigned once again, as it will from now on in Concordia’s new sanctuary for study and contemplation.

After welcoming the invited dignitaries, politicians and friends of Concordia, Clarence Epstein, Concordia’s senior director of Urban and Cultural Affairs, provided a brief history of the heritage building, located on the corner of Guy Street and René-Lévesque Boulevard.

He underlined how important it was for the university to preserve its historical character while converting it into a 600-bed residence and shared study spaces for students.

“We're embarking on a new era of responsibility where Concordia University will take on the stewardship that the sisters have lovingly and affectionately handed to us from here on in,” he said. 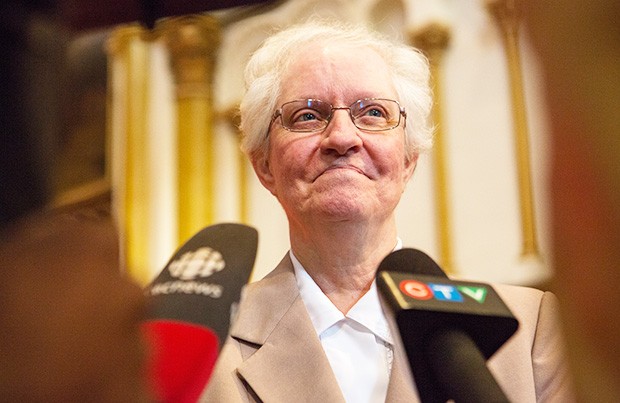 Sister Jacqueline St-Yves, congregational leader of the Grey Nuns of Montreal: "You have succeeded in responding to the needs of students."

President Alan Shepard thanked The Grey Nuns for their collaboration during the transfer of their Mother House and throughout the transformation project. “We are very aware how lucky we are to have it. And we show our gratitude by respecting the original functions within this, our newest pavilion but oldest structure, which is so perfectly aligned with our needs.”

Congregational leader Sister Jacqueline St-Yves congratulated the university on its transformation of the centrepiece of the Grey Nuns’ former home. “You have succeeded in responding to the needs of students,” she said. “This tour de force, as the Gazettecalled it, will serve you well in the future.”

Russell Copeman, Montreal city councillor and borough mayor for Côte-des-Neiges–Notre-Dame-de-Grâce, likewise praised Concordia for its careful repurposing of the historic structure. “This particularly challenging redevelopment project of turning a protected convent into a 600-bed student residence and this magnificent study space has been exceptionally well executed,” he said.

Hélène David, Quebec’s minister of culture and communications and minister responsible for the protection and promotion of the French language, echoed the sentiments of her municipal counterpart, and said the university is setting an example by undertaking the preservation of the historically significant building.

The Reading Room opened its doors to students two weeks ago. Concordia Librarian Guylaine Beaudry told the audience at the official opening that the feedback from students has been overwhelmingly positive.  “They tell us how it inspires them to study, and how it makes them proud to be Concordians.”