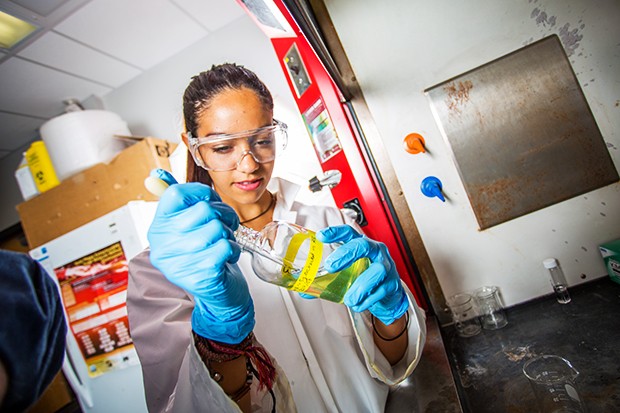 A summer internship gave Jean-de-Brébeuf college student Lina Belmesk the opportunity to be part of a Concordia team doing ground-breaking work — research that could have big implications for the environment. | Photos by Concordia University

Lina Belmesk still has a year left at Collège Jean-de-Brébeuf, so she’s a good deal younger than most people doing important university-level research.

But that didn’t keep her from playing a part in ground-breaking work that could have big implications for the environment. Belmesk spent two months this summer getting paid to work under the supervision of Concordia Chemistry professor Yves Gélinas and his team in his lab on the Loyola Campus.

Gélinas’ research centres on the cycling of natural organic matter in aquatic systems, and its role in buffering carbon dioxide levels in the atmosphere. In a study published by Nature in 2012, Gélinas and his fellow researchers established that CO2 molecules are naturally filtered from the air. The molecules become organic carbon on the surface of the sea and then, after sinking down to the seabed, bind with iron.

Now Concordia researchers are trying to develop a method of better predicting how that process works. Their goal is to find a way of accelerating the process, thereby possibly mitigating global warming. Since the oceans’ capacity to recycle CO2 only exists in the context of healthy, well-oxygenated ecosystems, Gélinas and his team are also hoping to use their data to explain the vital importance of protecting the Earth’s aquatic systems. 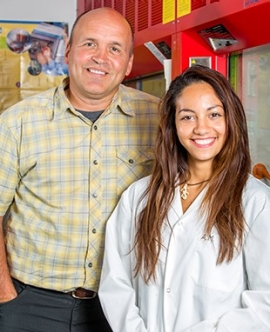 For Belmesk, it has been a thrill to spend her summer in Gélinas’ lab. “Amazing,” is how she describes the experience. “It didn’t even feel like work! I had so much fun analyzing my sediment samples and running the data,” she says.

At heart, Belmesk is a pragmatist. “I thought it would be a better idea to do this than work in a restaurant,” she says, “because I would learn at the same time.”

Belmesk was also hoping the internship would afford her some insight into the right choice for her future studies, since the moment of truth is fast approaching. “I have to make my choice this year,” she says. After this summer, she’s more convinced than ever that her future lies in research.

For his part, Gélinas says it was a pure pleasure to work with such a promising young student.

“Lina has done very well,” says Gélinas. “She’s enthusiastic and she’s talented.” Equally rewarding for Gélinas was the idea of giving back to the wider community by opening up his lab to young Quebec students with enormous potential.

As a scientist who came up in the French school system in Quebec, Gélinas says he’s eager to spread the word about the world-class scientific research happening right here in Montreal at Concordia. (“I didn’t even know Concordia had a science campus,” admits Belmesk.) He’s hoping that encouraging young people in the early stages of their interest in science will lead to even more homegrown talent working on important scientific advances.

Now that summer’s over and school is back in, Belmesk is thinking about the year ahead of her at Collège Jean-de-Brébeuf. She’s feeling positive. “I basically did my organic chem class in advance,” she says. “I’m starting class super confident.”

Learn more about Yves Gélina’s views on fracking and the environment.