Come cheer on the team at the first game of the regular season, covered by TSN and Radio-Canada
|
By Tiffany Lafleur 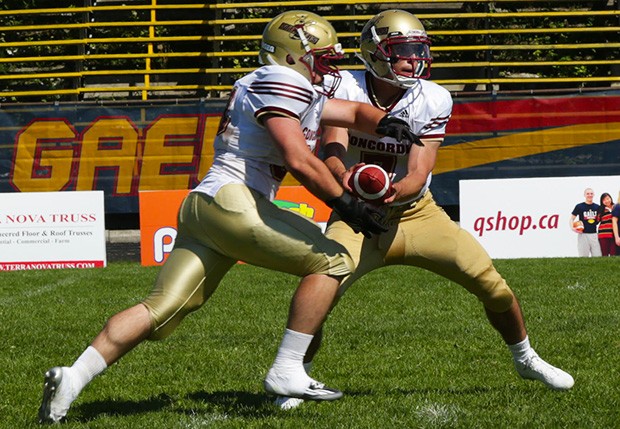 While the game starts at 1 p.m., the Department of Recreation and Athletics is hosting a pre-game party at 10:30 a.m. | Photos: Brianna Thicke

On Saturday, September 6, the Stingers football team will tackle their first home game of the regular season with a bang at 1 p.m., when they face the Bishop’s Gaiters.

“We are aiming high this season and we have great expectations for every game,” explains Head Coach Mickey Donovan. “We have about 60 newcomers this year to the team, along with 40 veterans and everyone is poised to do their best.”

The game, to be played at the Concordia Stadium on the Loyola Campus, will be broadcast live on Radio-Canada television and TSN 690 radio. Plus, the first 200 fans who come to watch the game will go home with a Concordia Stingers gift.

The last few seasons have been challenging for the team. However, with a new head coach — Donovan joined the university earlier this year — and a host of new and returning players, the Stingers are aiming for a fresh start to a new season.

In fact, Donovan claimed a victory with a 25-18 win over the Queen’s Gaels in a pre-season game on August 24.

“The team’s character is great and we’re forming a family,” says Donovan.

While the team has a positive attitude and a host of new players and coaches, one ingredient is needed to maintain that enthusiasm: a sold-out crowd to cheer them on their first home game.

The game starts at 1 p.m., but there is a pre-game party at 10:30 a.m., with food, music, games and drink specials. The party is hosted by the Department of Recreation and Athletics.

The first 200 fans will receive an exclusive Concordia Stingers mood cup. Plus one lucky person will win unlimited travel between school and home, courtesy of VIA Rail Canada.

Tickets are $5 for students or $15 for the season.

Wear your best maroon and gold outfit and come to the game to cheer the Stingers! If you can’t make it to the game, make sure to either watch it on Radio-Canada or tune in to TSN to keep up with our team.

The start of the soccer season is looming as well, with both the men’s and women’s team playing McGill at Loyola on Sunday Sept. 7 at 1 p.m. and 3 p.m. The women’s team is also playing Bishop’s at Loyola on Friday Sept. 5 at 6:30 p.m.