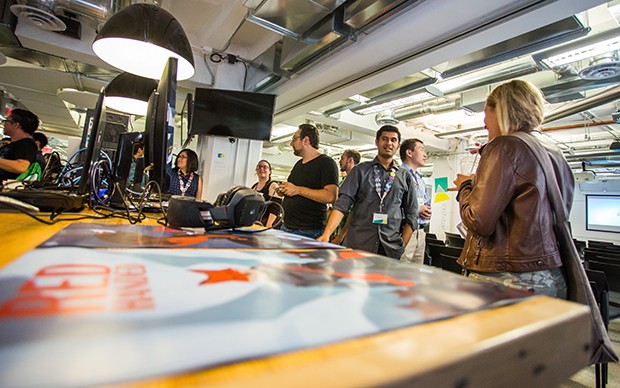 On August 14, Google Montreal was turned into an arcade showcasing the future of gaming and game makers.

But instead of featuring popular first-person shooter or car racing games that are ubiquitous in the gaming world, the event highlighted creations such as a Drunkwalk, wherein players try to navigate their way to their beds without falling down after a night on the town. Another featured game relies on human friendship and physical interaction between gamers to defeat aliens.

Now in its third year, the program is open to emerging media artists, designers and programmers, particularly recent graduates or those finishing their studies in game development. Program mentors were recruited from both the Concordia community and the Montreal gaming industry.

“Critical Hit is as much about gameplay as it’s about reflecting on games in a critical matter,” explains Bart Simon, co-director of TAG and associate professor in the Department of Sociology and Anthropology. “We see this project as a living laboratory or ‘collaboratory’ in which we push participants to stretch their boundaries by testing their ability to work with new people and to shift their creative direction.” 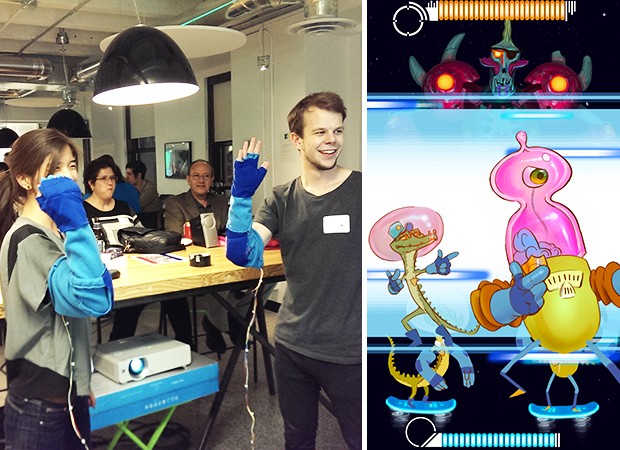 Spacebro works on the premise of friendship and secret handshakes. | Photos courtesy of Critical Hit

The structure of this year’s program was built around what Critical Hit calls “game jams,” design sessions that start fresh each Monday with the goal of producing a playable game by Friday. Such a structure forces participants to run with a theme and create something out of the ordinary.

Spacebro Justice Rocket is one such example. In this two-player game, participants wear a long glove that acts as the controller. In order to create the energy needed for their characters to successfully battle aliens, they must high five, fist bump and touch arms, mimicking the idea of secret handshakes between friends.

“The idea originated during a jam in which the theme was bizarre controllers,” says Nick Kornek, BA 14, a co-designer of the game as well as Concordia English literature graduate-turned-programmer. “Someone tossed out the idea of a game involving high fives and we took it from there.”

Spacebro was specifically meant for gamers to cooperate physically and break down barriers. “It’s fun to watch strangers play it together and how quickly they connect,” added Kornek.

Another unique game on display was Mouffe, which requires participants to do something not normally associated with video games: relax. Set in a tent filled with beanbags and balloons, players lay back and use a quilt as a controller to manipulate images projected on the tent walls.

“This game is totally nonlinear and there are no points,” explains co-creator Kim Hoang. “We set out to create something in which people can play in their own different way. When testing the game we were surprised with how people were so satisfied to sit back and just touch buttons.”

The next step for the Critical Hit game-makers is to enter their creations into independent gaming festivals in the hopes of securing funding for further development.

Visit Critical Hit to download games and learn more about this year’s program.