Students can now get up close and personal with exotic animals 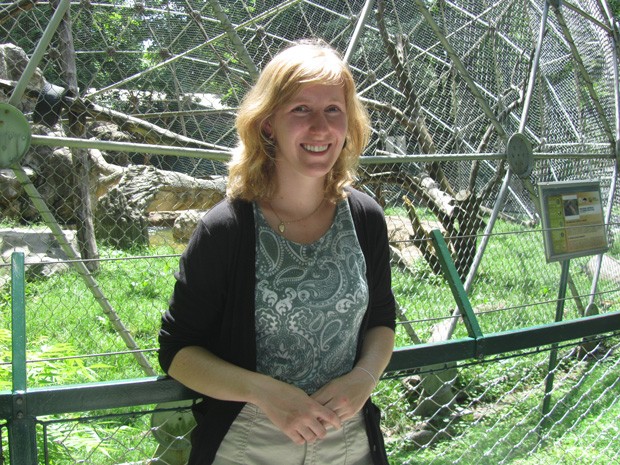 Emily Anderson in front of the Japanese macaque enclosure at the Zoo de Granby. | Photo courtesy of Anderson

Master students in Behavioural Ecology at Concordia now have the rare opportunity to study animals from halfway around the world, thanks to a new partnership between the university and the Zoo de Granby.

The zoo, just over an hour’s drive east of Montreal, will act as a living laboratory and is available for undergraduate field days and extended, specialized graduate research. Home to giraffes, elephants, red pandas, mandrills, lemurs and a host of other animals, it will provide students a space to observe wildlife without the added difficulty of tracking them.

Patrick Paré, biologist at the zoo, is in charge of the department of research and conservation. “In research, our goals are to optimize the organization’s scientific renown and to position it in three sectors of excellence: biodiversity preservation, veterinary medicine research and animal welfare in captivity. With the team of Mr. Weladji, we want to get more knowledge about the impact of enrichment and the exhibit design on animal behaviour, and ultimately on animal welfare.” Paré says.

Robert Weladji, associate professor in the Department of Biology, has been working with the zoo for five years. Although he has had students spend time researching there in the past, Weladji wanted to formalize an agreement to provide a level of financial and collaborative security.

Officially titled the Concordia-Zoo de Granby Initiative in Ecology, Conservation and Welfare of Captive Wildlife, the five-year partnership is the first of its kind, with both parties reaping rewards.

The agreement will open the door for Weladji and his students to collaborate on data collection, research methods and papers with the zoo’s staff. Concordia will also match funds put in by the zoo to help pay for teaching assistants, ensuring that at least four graduate students will receive financial support over the course of the five years.

“It's something very interesting for me as a researcher and for Concordia as an institution because we are able to offer the students this type of hands-on experience,” Weladji says.

The first student selected to take part in this official agreement is Emily Anderson, a master's student in biology. Since July, she has been observing and collecting data on the zoo's Japanese macaques. Of interest to her is the daily behaviour of the monkeys, from grooming to foraging, and how that might change from summer to fall, with a decline in visitors and in the days when the zoo is open to the public.

The zoo will also begin constructing a new, larger and more natural habitat for the macaques this fall, and Anderson is looking forward to studying what effect this change will have on them.

“Because of this, we will be able to compare the behaviour of the same group of individuals in two different habitats, which is relatively uncommon, and we will be able to see if there are changes in their activity budget and whether these changes suggest improved welfare,” she says.

But Anderson’s time monitoring the macaques has already led to a few unexpected insights. One such discovery came when local chipmunks began entering the enclosure to steal grains intended as “enrichment” for the primates.

Naturally, the chipmunks appealed to the macaques as game and were hunted as such, leading Anderson to this conclusion:

“We joke that the seeds aren't actually the enrichment but the chipmunks are.”