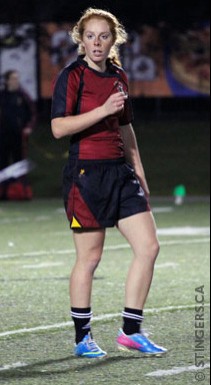 A centre from Sainte-Clothilde-de-Horton, Quebec, Tessier came to Concordia out of the very strong Dawson College rugby program and also the Quebec provincial team program.

In 2013, she established herself as a top player in the Réseau du sport étudiant du Québec (RSEQ) university conference. In seven games, she scored six tries to lead the Stingers in scoring, and was twice selected as a game MVP. Tessier was the Quebec conference Rookie of the Year and Concordia’s Female Rookie of the Year.

Joining Tessier is scrum half Bianca Farella, who suited up for the Stingers in 2012 before moving to Victoria to train full-time with Canada’s national team.

The World University Championship runs from August 8 to 10. It is the premier Rugby Sevens event for athletes currently registered in university or who have graduated in the preceding year.