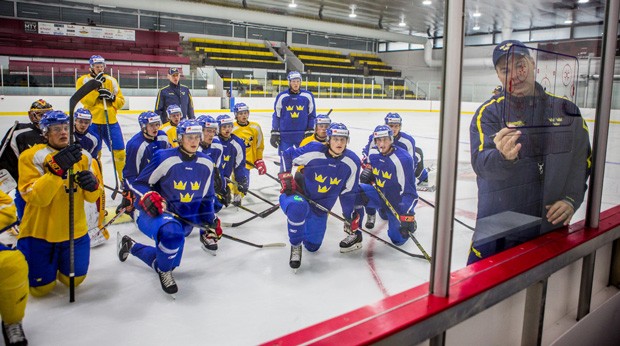 Swedish team members listen to head coach Rikard Grönborg as he gives them pointers during a scrimmage. | All photos by Concordia University

Concordia’s newly renovated Ed Meagher Arena is playing host to the best of the best in men’s junior hockey this week and next, culminating with a series of three exhibition games between top powerhouse teams from Canada, the Czech Republic and Russia beginning on Monday, August 4.

This past week, the Swedish national team made the Loyola Campus rink their home away from home as they prepared for a series of exhibition games in Lake Placid, N.Y.

The arrangement came about thanks to a long-standing relationship between the Swedish junior team and Kevin Figsby, head coach of the Concordia Stingers men’s hockey team.

“We had them here five years ago in early October,” Figsby recalled as he watched the Swedish practice from the stands. “We set up games for them and hosted them here for a week. They stayed in a hotel downtown, drove on the shuttle bus with all of our students between the two campuses, and spent the days here practising.”

Sweden’s head coach Rikard Grönborg was team manager at the time of the 2009 visit. He said the experience, which included a game against the Stingers, was just what those running the program had hoped for.

“We stayed in touch, because obviously we had a great experience then. And now with the upgrades and everything else, it’s the perfect fit for us.” 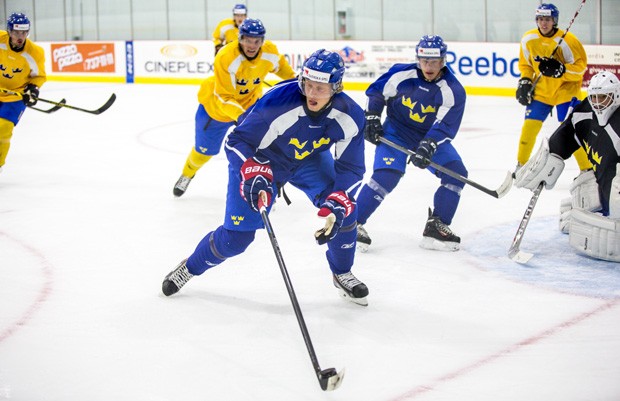 This year, the Swedish team stayed in residence on the Loyola Campus and benefited from a university meal plan. “Everything is so convenient here,” said Grönborg. “Everything is within walking distance, and it’s really simple for us. The university went out of their way to make sure we’re well taken care of.”

The Swedish team will play four exhibition games in Lake Placid beginning on Sunday, August 3 — three against the United States and one against Finland — before returning to face Russia on August 9 at the Palais des Sports Léopold Drolet in Sherbrooke. 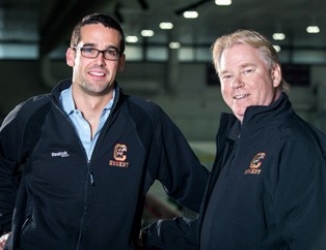 Kevin Figsby (at right), head coach of the Stingers men’s hockey team, was instrumental in bringing the Swedish team to Concordia while Patrick Boivin, director of Recreation and Athletics, invited Hockey Canada to stage the three exhibition games.

Patrick Boivin, the university’s director of recreation and athletics, is a member of the volunteer organizing committee for the 2015 IIHF World Junior Championships, taking place in Montreal and Toronto in late December and early January. He invited Hockey Canada to stage the series of exhibition games at Concordia in part because it’s an opportunity to spotlight the university’s upgraded facilities.

“It’s great to have this kind of attention on our facilities. We want to make people aware that this is not the same arena that was here before, and show them what we can offer as a university during the off-season,” says Boivin.

Hosting world-class players and teams also benefits the university’s own hockey program, said Figsby as he pointed out several members of the Stingers men’s hockey team sitting in the stands watching the young Swedes tear up and down the ice.

“Now that we have the building that we have, with the ice that we have, it’s attracting these kinds of things. Certainly in the short term it’s bringing some recognition, but I think in the long term it’s going to pay big dividends for our programs.”

Swedish forward Jacob de la Rose, who was selected by the Montreal Canadiens in the second round of the 2013 NHL draft, was happy to be back on the ice after a long summer break. 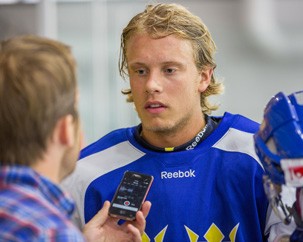 Swedish forward Jacob de la Rose was happy to be back on the ice. He was selected by the Montreal Canadiens in the second round of the 2013 NHL draft.

“It’s been a great time so far,” he said of the Concordia training camp. “It’s a great facility, and it’s nice to be living on the campus, only a hundred metres away.”

As the 19-year-old prepares for his first season playing in North America — most likely for the Hamilton Bulldogs in the American Hockey League — de la Rose says he’s hopeful that he’ll one day get to wear the coveted Habs jersey.

“I’m going to the training camp in September, then we’ll see what team it will be,” he said. “Everybody who is drafted by the Canadiens’ dream to play with the Canadiens. It’s the same for me, and hopefully one day I can play with them.”

Sweden hosted last year’s IIHF World Junior Championships in Malmo, suffering a heart-breaking overtime loss to Finland in the gold-medal game. De la Rose had six points in the tournament. Even though it’s probably still too early to say, he’s confident about his team’s chances at the 2015 tournament.

“It’s the first time we’re playing together, so maybe we need some games to get the group together. But we have really good, skilled, individual players, and I think we have a good team.”

Want to check out some of the world junior hockey action at the Ed Meagher Arena next week? Visit the Hockey Canada website to purchase tickets.