Concordia researchers and graduate students receive over $7 million in grants 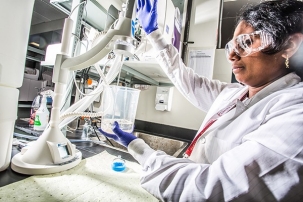 Concordia researchers and graduate students will receive over $7 million from the Natural Sciences and Engineering Research Council of Canada (NSERC) in the next five years.

The government expects this significant investment to drive innovation as well as economic prosperity in Canada.

Support for the researchers is provided mainly through Discovery Grants, NSERC’s longest running program, which rewards excellence in fields such as engineering, psychology, biology and mathematics.

“The highly competitive funding for discovery research raises the bar for science and engineering excellence in Canada, and unleashes the creative potential of our researchers,” said Janet Walden, chief operating officer of NSERC.

“Building on this dynamic research environment, NSERC’s scholarships and fellowships are attracting and cultivating new talent with the skills necessary for the growth of our knowledge-based economy.”