Western teams round up four Concordia players
|
By Catherine Grace 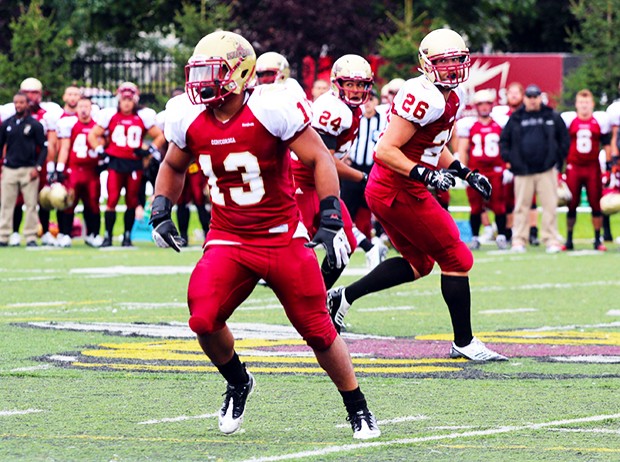 Linebacker Travis Bent was chosen in the sixth round of the CFL draft, 54th overall. | Courtesy of Recreation and Athletics

Four members of the Concordia Stingers football program were selected by Western Division teams in the 2014 Canadian Football League (CFL) draft held on May 13.

Fourth-year linebacker Max Caron, one of the most accomplished players in the history of Concordia football, was selected in the second round, 16th overall, by the Calgary Stampeders.

Over his four years, the Kingston, Ont., native put together a long list of accomplishments including winning the Presidents’ Trophy as the outstanding defensive player in Canadian university football in 2011. He was a Canadian Interuniversity Sport (CIS) all-Canadian in 2011 and a Quebec conference all-star in 2011 and 2013.

He’s earned many honours from Concordia as well, including Male Athlete of the Year in 2012, MVP of the football team and outstanding player on defence.

Smith, a fourth-year man out of Scarborough, Ont., earned a lot of respect for playing on both sides of the ball last season. His skill and selfless play earned him MVP honours at the 2013 Concordia football banquet. He was also a Quebec conference all-star in 2012.

Slotback Kris Bastien, a two-time Quebec all-star, was drafted in the third round, 26th overall, by the Saskatchewan Roughriders. The St. Lambert, Que., resident, who played four seasons with the maroon and gold, is a versatile athlete who many consider the most pro-ready receiver in the 2014 draft.

Finally, linebacker Travis Bent was chosen in the sixth round, 54th overall, also by Saskatchewan. The fourth-year athlete out of Ajax, Ont., was the leading tackler in the country in 2012 and his efforts earned him a Montreal Alouettes football bursary in 2013.

A record 59 out of 65 players selected were from CIS programs, including 21 athletes from the six Quebec-based schools.