At the intersection of human rights and performance 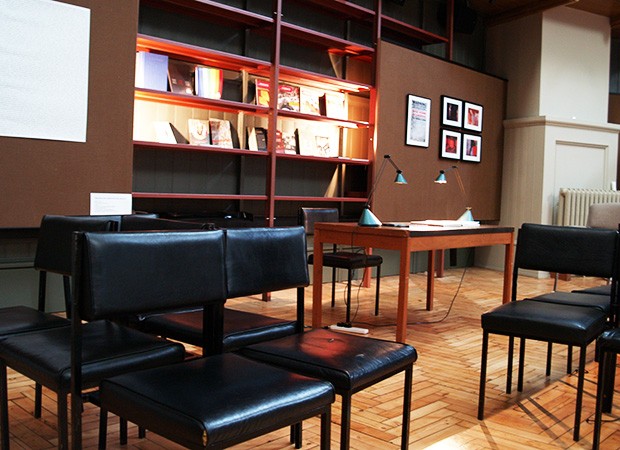 Classic design sensibilities and a constantly evolving collection: the Library of Performing Rights as it appeared at Queen Mary University of London. | Photo courtesy of Lois Weaver

Lois Weaver, a professor of contemporary performance at Queen Mary University of London, is bringing something special to Concordia: a travelling library.

This summer, from June 21 to 28, Weaver will be joining more than 750 scholars, artists and activists at Concordia for the Encuentro, a biennial conference and performance festival. It will be the first time the continent-straddling event — which is organized by the Hemispheric Institute of Performance and Politics — takes place in Canada. The theme is Manifest! Choreographing Social Movements in the Americas.

Weaver is the creator of the Library of Performing Rights, a travelling archive of documents that explores the intersection of performance and human rights. Visitors are encouraged to browse and contribute to its evolving collection, and to engage in conversations about it.

The concept — developed in collaboration with London’s Live Art Development Agency — originated in 2006, when Weaver directed the Performance Studies International conference. As an organizer, she realized that performance work focusing on human rights is tough to document, and to take on the road.

Thus was born the idea of creating a portable library that would generate thought and discourse on these subjects. After putting out a call, Weaver began gathering a collection of documents that she has since brought to places like London and Rio de Janeiro.

While some of these materials will find their way to Montreal, Weaver says that the collection itself — which grows and changes each time it is transported and reassembled — will largely be local and immediate.

“I have always wanted to situate the library in an Encuentro because it’s an environment that is dedicated to the ongoing and consistent study of politics and performance,” she says. “I also want to develop a French-language section to complement our growing English and Portuguese materials.”

The library’s latest iteration was designed by Jo Palmer, one of Weaver’s collaborators. Inspired by what Weaver describes as “old-fashioned libraries,” it will include shelves of books, daily newspapers and recent journals, as well as monitors for watching videos and searching the web.

The installation will also feature a “long table” designed to encourage conversation, as well as an area for screenings and impromptu talks.

Weaver sees the library as a space where materials and programs will grow at their own pace, outside of the official events at the Encuentro. In previous instances, the project provided an area where conference participants were able to absorb the events of the day and connect with one another. In London, a time-lapse video camera even chronicled the activities that went on inside it.

At Concordia, Weaver hopes to recreate this sort of engagement. She also wants to leave something behind.

“The intention is to find a way to leave this collection in Montreal and make it permanently available to everyone there,” she says.

If you’re interested in contributing to Library of Performing Rights, or taking part in the activities it will host, contact Joanna Donehower.

The 2014 Encuentro takes place at Concordia University from June 21 to 28.