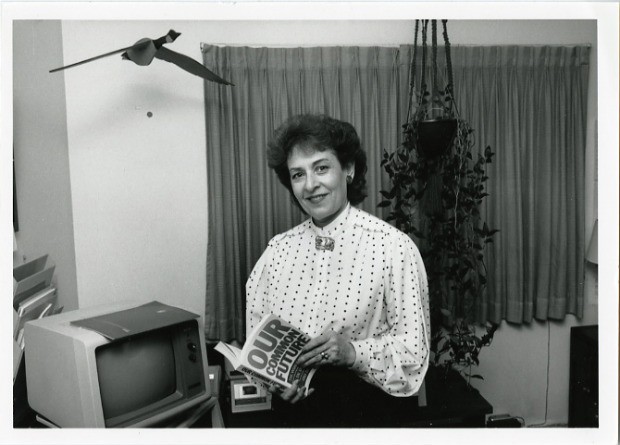 Bernice Goldsmith in the mid 1980s with Our Common Future, the Report of the United Nations World Commission on Environment and Development. | Photo courtesy of Concordia Records Management and Archives

Bernice Goldsmith, who had a long and illustrious career at Concordia, passed away Wednesday, March 26, at the age of 79.

She is perhaps best known by the Concordia community for her pioneering contributions in incorporating social and environmental concepts and practices into the engineering curriculum. She helped establish the Social Aspects of Engineering program — the first of its kind in Canada.

Goldsmith is fondly remembered by those who worked with her. “She was very easy to talk to, very enthusiastic, dynamic and hardworking,” says Hugh McQueen, Professor Emeritus in the Department of Mechanical and Industrial Engineering. “We worked closely together until 1998, when I officially retired from full-time teaching.”

Not from an engineering background, Goldsmith nevertheless shaped Concordia’s emerging professional program and excelled as a senior administrator, and in her non-academic life as an activist. As a student at what was then Sir George Williams College, she completed an advanced degree in the unique program, Collaborative Studies in Science and Human Affairs. This equipped her to work with McQueen during the 1970s to shape the newly established Social Aspects of Engineering Program. In 1984, during McQueen’s sabbatical, Goldsmith became the head of the program and remained its leader for over a decade.

During this time, course offerings included “Engineers and Society,” “Historical Impact of Technology on Society,” “Science Policy and Engineering Innovation,” and “Management of Transition to an Information Society.” Officially retiring in 2000, Goldsmith continued to serve at Concordia. She had been an assistant professor in the Faculty of Engineering and Computer Science; she then became an Assistant Professor Emerita in what is now the Faculty’s Centre for Engineering in Society.

Following the conclusion of her teaching career, she applied her knowledge of technology, engineering and the environment to the area of environmental impact assessment. She was active in the International Association for Impact Assessment, co-chairing its Trade Impact Assessment section, and collaborating on the Principles of Environmental Impact Assessment Best Practices.  Closer to home, she was a driving force in Les Amis du Parc Meadowbrook, a group dedicated to preserving the golf course as an urban park.

In 2010, Goldsmith, along with McQueen, was a winner of Concordia’s inaugural Sustainable Champions prize, recognizing her contributions to analyses of life-cycle endurance.

Goldsmith was married to the late Carl (Beno) Goldsmith, mother of Philip Goldsmith and mother-in-law to Marla Rapoport. Goldsmith’s family has chosen to honour her memory with the newly-established Bernice Goldsmith Bursary in the Social Aspects of Engineering. Contributions may be made online or by calling 514-848-2424, ext. 3884.

“Bernice was the model of an engineering educator,” says Deborah Dysart-Gale, current chair of the Centre for Engineering in Society. “She was above all a concerned citizen and keen observer of how technology shapes our society and environment. By conveying this knowledge to students, she helped shape how engineers learn.”

The university flags were lowered in her honour on Friday, March 28. Read the announcement and the flag-lowering policy.